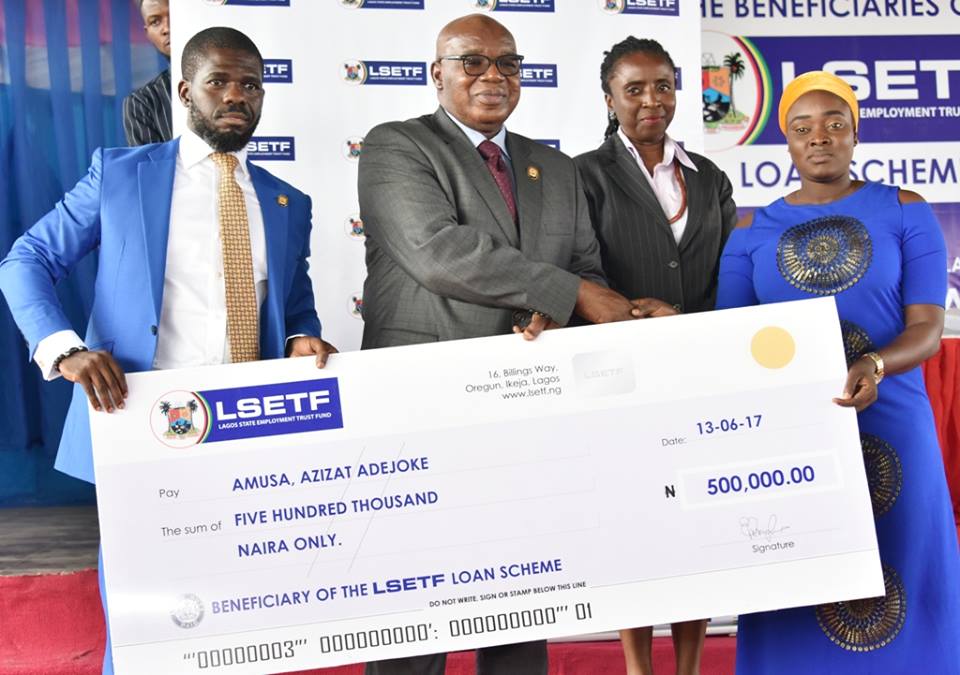 No fewer than 1,438 owners of Micro, Small and Medium Enterprises (MSMEs) in Lagos State were given the sum of N924.7 million by Governor Akinwunmi Ambode on Tuesday.

The money is a form of funding assistance to support businesses of the beneficiaries, thereby reducing unemployment and increasing wealth among the people.

At the presentation of cheques to the business owners at De Blue Roof, LTV 8 in Ikeja, Mr Ambode expressed delight that his administration was on course to boost economy of the state.

He further said it was good to know that the previous beneficiaries have started repaying their loans, thereby expanding their businesses and creating jobs.

The Governor, after assuming office, launched a N25 billion Employment Trust Fund (ETF) scheme to provide entrepreneurs, artisans, traders and others with capital to boost their businesses.

Since the programme started, about 4,000 businesses have benefited a total of N3.5 billion from the scheme, while the target of the state government is to support about 100,000 MSMEs and create at least 300,000 direct and 600,000 indirect jobs by 2019 through the initiative.

In January 2017, Mr Ambode presented cheques totalling about N1 billion to 705 beneficiaries who were selected after scaling through a transparent screening process.

At today’s presentation, the Governor, represented by the Commissioner for Wealth Creation and Employment, Mr Babatunde Durosinmi-Etti, made particular reference to one of the earlier beneficiaries simply identified as Jand2Gidi, saying that it was a thing of joy that they have started contributing to the growth of Lagos economy.

“One of the success stories of this programme which I am very proud of is the achievement of one of the first set of beneficiaries, a company called Jand2Gidi, run by two young women.

“Today, they have invested their loan in buying motorcycles for their delivery men, and hired people to operate those motorcycles.

“Not only are they repaying their loan, they have also created at least 10 direct jobs for Lagos residents, thereby increasing the economic activity across the State. We eagerly expect to celebrate many more success stories like this,” the Governor said.

The Governor, who commended the ETF Board for the good work done so far, equally charged them to increase the pace of work and ensure that by the end of 2017, at least 20,000 businesses would have benefited from the loan program, just as he expressed optimism that the overall target of the scheme would be met by 2019.

While congratulating the new 1,438 beneficiaries, Mr Ambode charged them and other potential beneficiaries to emulate those who are repaying their loans, thereby ensuring the success of the program

“It is only when you pay your loans back, and grow your businesses, that we can truly celebrate the success of this programme. Your success is our success, and together we will grow Lagos State’s economy and create jobs for our residents.

“This initiative is another example of taxpayers’ money working for the people. I cannot thank enough all taxpaying citizens for providing the resources from which the State Government contributes N6.25billion tranches annually to the N25 billion ETF,” he said.

Besides, Governor Ambode urged other existing businesses or people desirous of starting one to take advantage of the scheme, assuring that the process of assessing and selecting beneficiaries would continue to be transparent and meet globally acceptable standards.

In her opening remarks, Chairman, Board of ETF, Mrs Ifueko Omoigui-Okauru, said the presentation ceremony was another milestone by Governor Ambode’s administration, saying that the vision of the Governor in setting up the Fund, which is the first of its kind in Nigeria, and his unwavering commitment to its success deserved commendation.

Mrs Omoigui-Okauru also revealed a partnership between the Lagos State Employment Trust Fund (LSETF) and the United Nations Development Programme (UNDP) to improve technical and vocational training in the State.

Under the programme, she said the LSETF will contribute Naira equivalent of $3million, while UNDP will contribute $1million and the funding will be used to train eligible Lagos residents in manufacturing, construction, healthcare, hospitality and entertainment, while successful trainees will be placed in jobs at the completion of the programme.

Responding on behalf of beneficiaries, Mr O.A Goriola of November 16 Nigeria Ltd, commended the state government for the initiative and pledged that the funds would be judiciously utilized.