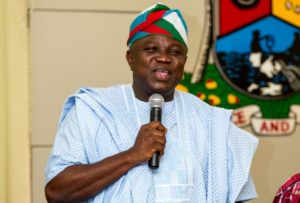 Governor Akinwunmi Ambode has presented a budget of N813 billion to the Lagos State House of Assembly.

Addressing the lawmakers on Tuesday morning at their chamber, Mr Ambode stressed that the “key focus of the 2017 budget is road construction, rehabilitation and maintenance.”

According to him, “Our government will focus on roads that will open up the inter-lands, improve connectivity in the state and reduce travel time.”

The Governor said the N813 billion budget, tagged ‘Golden Jubilee Budget’, would have N300.535billion earmarked for recurrent expenditure, while capital expenditure would gulp N512.464billion, representing a Capital/Recurrent ratio of 63 percent to 37 percent.

Mr Ambode also told the lawmakers that the Phase 2 of the 114 Local Government Roads project and the Fourth Mainland Bridge will commence in 2017.

He further said Lagos State was expecting an increase in the Federal allocation through 13 percent derivation from oil and gas in 2017.

The Governor said his administration would continue to render its performance to the residents through the Town Hall Meetings and appealed for more supports.

According to him, the 2016 budget, as at October, had been implemented to about 77.5 percent, representing N350 billion.

Responding, Speaker of the Assembly, Mr Mudashiru Obasa, applauded Mr Ambode for his zdeal to move the state forward.

He assured him of the Assembly’s continued support for the benefit of residents of the state.