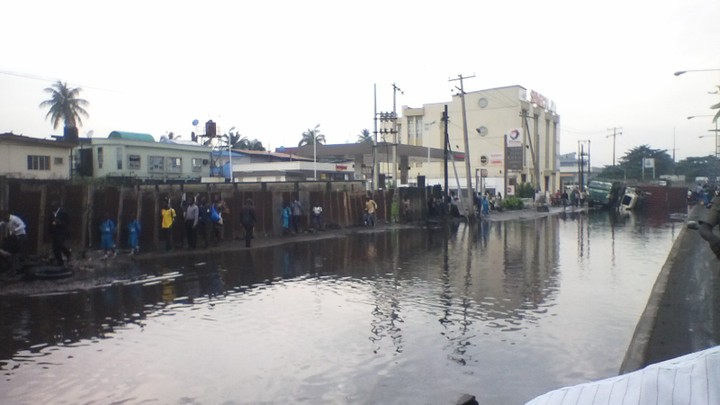 President of Dangote Group, Mr Aliko Dangote, has revealed that not less than N20 billion is lost daily to the deplorable state of the Apapa-Wharf road in Lagos.

Mr Dangote said if the road had been fixed, the Federal Government would have been able to add N560 billion monthly to the struggling economy.

However, the business mogul commended the decision of the government to quickly rehabilitate the road, saying it was the right step to take at this critical time.

The Apapa-Wharf road leads to the nation’s major port, where billions of Naira is made to the coffers of Nigeria.

Few weeks ago, some stakeholders in the maritime sector staged a peaceful protest at the port, calling on authorities to fix the road.

Speaking on Tuesday with journalists in Lagos at a media parley, Mr Dangote noted that the bad state of the Apapa-Wharf road has made some businesses in the area to suffer low patronage.

According to the Africa’s richest man, his firm alongside Flour Mills will spend over N2.5 billion to repair 2 kilometres double lane on each side, bringing the total to 4 kilometres.

“The economy loses over N20 billion daily to the Apapa-Wharf road and this affects businesses across the country.

“All our operations in the hinterland in Ilorin, in Kano are operating at 40 percent maximum capacity.

“But at the moment, there is no linkage road going from South West to the North. If you have to do this, you will need to go through Ajaokuta, Obajana, Lokoja and you have to go by that uncompleted road Obasanjo started 13 years ago,” Mr Dangote said.

The businessman explained that the road would undergo a total reconstruction because the FG has said all cables and pipes must go underground.

“We will also construct good drainage system because we discovered that this is what destroys the road. We will make sure this problem is sorted out once and for all. This thing should not be allowed to happen,” he told newsmen.