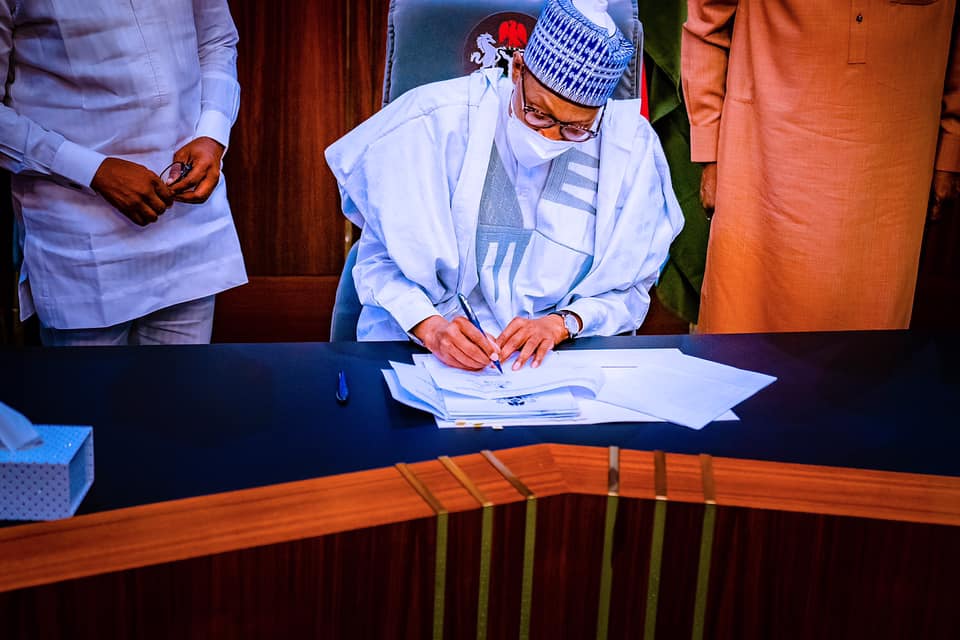 The supplementary 2021 budget of N982 billion recently passed by the National Assembly has been signed by President Muhammadu Buhari.

The budget was signed by the President on Monday shortly before he departed the country for London to attended an education summit and also see his doctors in the United Kingdom.

The N982.7 billion budget, which was signed in the presence of Vice President Yemi Osinbajo and a few others, would be used to address urgent security and COVID-19 needs of the nation, a statement issued by the Senior Special Assistant to the President on Media and Publicity, Mr Garba Shehu, said.

During the short ceremony held in Abuja yesterday, Mr Buhari applauded the parliament for the expeditious consideration and approval of the supplementary budget, assuring that the executive arm of government would ensure the timely delivery of capital projects to achieve the laudable objectives of the proposed spending.

Business Post reports that of the amount, N123.3 million is for recurrent (non-debt) expenditure, while the sum of the N859.3 billion is for contribution to the development fund for the capital expenditure for the year ending on December 31, 2021.

Meanwhile, Mr Buhari has arrived in London for the Global Education Summit on Financing Global Partnership for Education (GPE) 2021-2025.

The summit, which will be co-hosted by the Prime Minister of the United Kingdom, Mr Boris Johnson, and the President of Kenya, Mr Uhuru Kenyatta, will bring together Heads of State and Government as well as stakeholders and youth leaders, and provide a platform for partners to chart a way forward towards transforming education systems in partner countries, through the exchange of best practices.

It will also offer the opportunity for leaders to make 5-year pledges to support GPE’s work to help transform education systems in up to 90 countries and territories.

President Buhari is also expected to use the visit to hold a bilateral meeting with Mr Johnson and after the meeting, he will spend a few days for an earlier scheduled medical check-up. He is due back by the second week of August 2021.