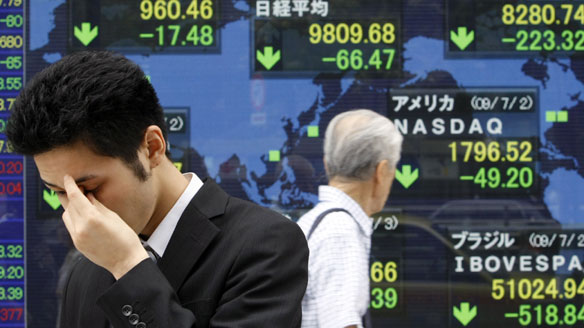 Asian stocks reversed early gains to end mixed on Tuesday as investors digested news of a terrorist attack in Manchester, England, and fresh revelations provided additional evidence that the White House actively sought to undermine the FBI investigation into Russia.

At least twenty-two people were killed and around 50 others injured in a suicide attack at an Ariana Grande concert late Monday in Manchester, police have said.

Separately, the Washington Post reported that U.S. President Donald Trump urged two senior intelligence officials in March to publicly deny any evidence of collusion between his campaign and Russia.

Chinese shares extended losses for a second straight session on renewed concerns over a regulatory crackdown on shadow banking and speculative trading. The benchmark Shanghai Composite Index dropped 13.95 points or 0.45 percent to 3,061.72, although Hong Kong’s Hang Seng Index inched up 11.81 points or 0.05 percent to 25,403.15.

Japanese shares fell as news of the suspected terrorist attack in Britain and the political crisis gripping Washington lifted the safe-haven yen and kept export-oriented shares under pressure.

Manufacturing activity in Japan expanded at the weakest pace in six months in May, preliminary data from IHS Markit showed, further weighing on the markets.

Australian shares fell slightly, dragged down by banking and material stocks. The benchmark S&P/ASX 200 Index reversed early gains to end the session down 11 points or 0.19 percent at 5,760.20. The broader All Ordinaries index slipped 8.40 points or 0.14 percent to 5,802.80.

The big four banks fell between 0.3 percent and 1 percent as concerns about the government’s new bank levy persisted. Mining giant Rio Tinto shed 0.7 percent after launching an offer to buy back up to $2.5 billion of its U.S. dollar-denominated bonds.