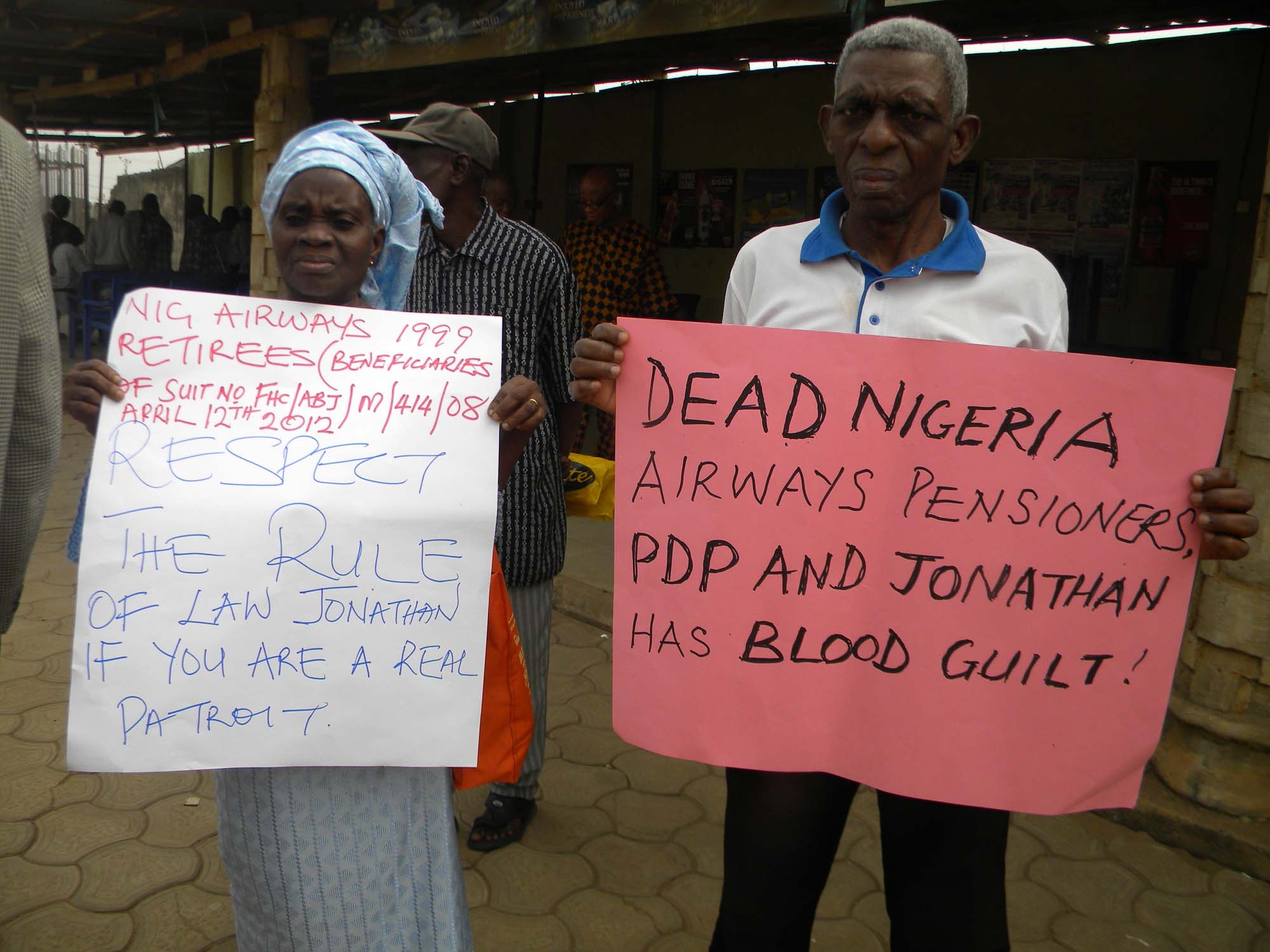 The final severance package of N78 billion for former workers of liquidated national carrier, Nigeria Airways, has been reduced by 45 percent, Daily Independent is reporting.

The paper, in its investigation, gathered that the Presidential Initiative on Continuous Audit (PICA) set up by President Muhammadu Buhari in its recommendation slashed the sum to just N43 billion.

However, Minister of State for Aviation, Mr Hadi Sirika, is vehemently against this development, insisting that the earlier approved sum of N78 billion must be paid to the beneficiaries.

Daily Independent is reporting that “the reduction of a massive N35 billion from the recommended and approved N78 billion by the Inter-Ministerial Committee is causing ripples in the presidency.”

Also, investigations by the paper reveal that this move may backfire for the Federal Government, which is contemplating on floating a new national carrier.

It was learnt that international creditors of the former carrier are preparing to sue the government over its plans to set up a new national carrier without first settling its old debts with them.

Since Nigerian Airways was liquidated in 2003 by President Olusegun Obasanjo, no fewer than 700 of the former workers had died of various illnesses.

The Inter-Ministerial Committee set up by the Federal Government in 2006 had recommended the sum of N78 billion as the total severance package for 10 years for the workers, including pension arrears for the period after the physical verification of about 6,000 beneficiaries. But the Presidential Initiative on Continuous Audit (PICA) set up by President Muhammadu Buhari in its recommendation slashed the sum to just N43 billion, a 45 percent reduction.

PICA, at reaching the N43 billion, it was gathered, removed the 10 years pension arrears as agreed with the former workers, their unions and the Inter-Ministerial Committee.

However, the reduction of a massive N35 billion from the recommended and approved N78 billion by the Inter-Ministerial Committee is causing ripples in the presidency as the Minister of State for Aviation, Mr Hadi Sirika, is insisting that the earlier approved sum must be paid.

Also, the former workers in one of their meetings with President Muhammadu Buhari had agreed to reduce the pension arrears to 10 years from the agreed 25 years during the time of the late President Umar Yar’Adua in 2009, but with a proviso that the 10 years pension arrears would be paid, which the government accented to.

Apart from the Nigerian staff of the airline, outstations like those in Rome, Saudi Arabia, Benin Republic, Cameroon, Dubai and all the French speaking countries in Africa would also benefit from the severance package, which have been lingering since the liquidation of the airline in 2003 by former President Olusegun Obasanjo.

Only employees of the former airline in United Kingdom and United States were paid their entitlements of 25 years severance package in full by the Federal Government.

A document made available to Independent by a source close to the presidency dated August 10, 2016 with reference number Ref: TCA0036/S.I/T6/183, addressed to President Muhammadu Buhari by Mr Sirika vehemently negated the N43 billion recommendations by PICA.

Mr Sirika in the letter with the theme, ‘Settlement of the terminal benefits of ex-workers of Nigeria Airways (in-liquidation) – Appeal for Mr President Intervention,’ recalled that the Federal Executive Council (FEC) at its meeting of May 21, 2003, approved the liquidation of the airline vide Conclusion 35 and Council Resolution No. EC (2003) 145 following which Bureau for Public Enterprises (BPE) was directed to effect the liquidation.

Sirika, however, observed that before the company was liquidated, there was no proper determination of the worth of the company in terms of income on realisable assets vis-à-vis the liabilities in form of entitlements of staff that would be affected. Government insisted that the workers must be paid their entitlements in full.

The document indicated that the sum of N29.1 billion, which represented five years severance package, were paid to the former workers of the airline.

Mr Sirika in the letter to Buhari warned that Nigeria may never have a national carrier again until all the staff especially foreign nationals are paid off.

The letter reads in part: “Following from the above, the ministry arrived at a decision to compute additional 10 years pension pay-off to make up 15 years (being one of the options recommended by the Inter-Ministerial Committee), instead of the 20 years pay-off demanded by the ex-workers.

“To this end, the entitlements of all categories of beneficiaries were updated and verified in accordance with the inter-ministerial template.

“It is imperative that the liability is paid-off because if unpaid it may stall the resolve to create a national carrier as the international creditors of the defunct Nigeria Airways may sue the new entity as having tangential relationship with the former.”

Besides, another document made available to Independent on the issue by a union, Aviation Unions Grand Alliance (AUGA), stated that with the full and final payment of the workers by the Federal Government all instituted court cases against the government would be dropped.

The document reads in part: “The approval and subsequent payment of supplementary compilation, 33 percent pension increases, outstanding pension arrears and additional 10 years pension pay off to all categories of our members will bring to a close all agitations from the above-mentioned unions.”