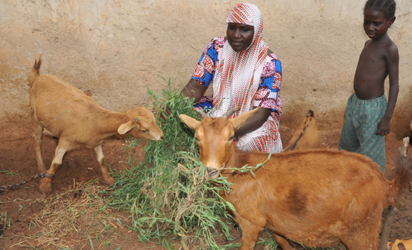 The Jigawa State government has said it is targeting 18,000 women in the state for its goat multiplication farming programme.

The state government said it hopes this scheme would be a good source of foreign exchange earnings for its economy and as well take out of poverty in the state.

The goat multiplication farming initiative was introduced by Governor Muhammed Badaru Abubakar to wipe out poverty among women in the state.

He said such is practised in many African, Asian and South American countries.

According to the state government, it is targeting about 18,000 women in the 287 wards from the 27 local government areas of Jigawa.

The scheme, it said, was captured in the 2016 budget to rid the state of extreme poverty using agriculture.

Governor Abubakar explained in an interview with Vanguard that livestock development is an area his administration targeted to diversify Jigawa’s economy, improve women participation in economic activities and rid the state of extreme poverty especially amongst women.

He admitted that, “Our state has one of the highest levels of poverty especially amongst women and this is something we must stop,” saying that “The easiest and most effective way [to eradicate poverty] is through the goat multiplication programme which we borrowed from Botswana and South Africa, where millions of women were removed out of poverty.”

Mr Abubakar disclosed that millions of Naira was invested to buy thousands of goats so that, through a revolving scheme, every woman in the state that requires economic independence will be assisted to fulfil her dreams.

“We chose goats because of their high profit in terms of reselling value and capacity and reproductive frequency as well,” he said.

According to him, his administration viewed women as a core group that could be used to tackle poverty.

As part of this scheme, one million livestock in the state were vaccinated, the Governor’s Special Assistant on Community Services, Alhaji Hamza Muhammed Hadejia, said.

He explained that the idea behind the scheme was to provide millions of women and youth the opportunity to rid them out of poverty.

“We have set up a committee that is working with the over 18,000 beneficiaries so that the output of the multiplication project will be marketed and sold at optimum profit,” Mr Hadejia said.

Already, the Governor’s aide stated, the Saudi Arabian government mass animal purchase scheme is being explored by the committee so that, in the next few years, the beneficiaries will be able to export their goats and also sell locally.

“It is estimated that by end of the year, these 18,000 distributed goats will multiply to over 100,000 and will form a large resources for both the beneficiaries as well as revenue for the state government,” he added.

“In short, millions of people, including the beneficiaries and their families, in few years to come, will be taken out of poverty”.

While the programme attracts wide acceptance amongst women in the state, the opposition described it as a joke and a pointer that the administration has taken Jigawa  backward after the former government built an airport that “launched  the state into the elite comity of states in the country”.

To this, Governor Abubakar said, “Given the option of a plane ride to Abuja and back from the `wonder airport’ at N50,000 and three goats for N15,000, our rural women opted for the latter.”

Meanwhile, some of the beneficiaries of the programme have lauded it, saying it is a welcomed development.

Aishatu Jibrin, a 22-year-old mother of four and a beneficiary of the scheme, who lives in Kudai, a suburb of Dutse, the state capital, said, “I have been knitting since when I was 12 and I have continued even after marriage but the impact on my livelihood and that that of my family has not changed due to exploitation by middlemen.

“I was so happy when my name appeared among pioneer beneficiaries of the scheme and the day I collected my three goats, two she goats and one male, it was the beginning of a dream which I hope will transform my life and that of my family in the next one year.”

Already, Aishatu’s three goats have multiplied and she’s hopeful that, by end of the end year, her backyard will be full of goats.

“My hope is to sell [the goats] by the end of year so that I can buy many sewing machines and open a fashion business in my village,” she said.

Another resident of the state, Indo Dahiru, a 32-year-old mother of four, who lives in Limawa, narrated that, “When I was given the three goats last year, I was apprehensive that  they may die because I had never engaged in goat or animal husbandry before. But as I got used to it, I saw them begin to multiply. I became more attracted and began to pay more attention to them.”

“I was never a contributor to the upkeep of the family because I was not involved in any trade or business.

“However, as I became engaged in this project, I can now say, without the fear of being contradicted, that my life and that of my family has changed.

“My hope is to be able to generate enough from the business and afford to pay for hajj.”