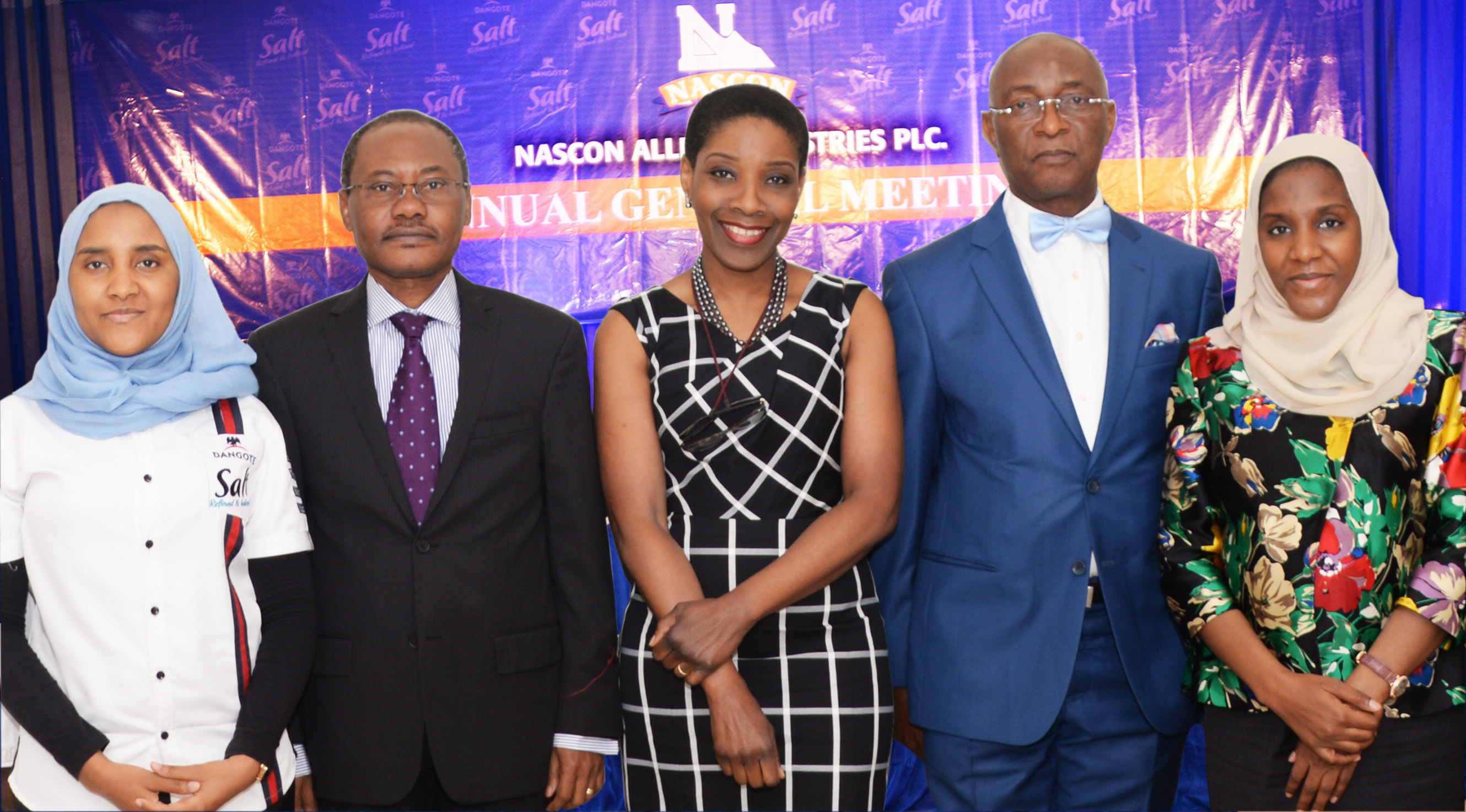 Shareholders of NASCON Plc have been assured of good returns on their investments especially with plans to roll out more products before the end of this year.

At the firm’s Annual General Meeting (AGM) held on Thursday, Chairperson of NASCON, Mrs Yemisi Ayeni, disclosed that plans were underway to invest in salt packaging and seasoning cubing lines.

She said further that when introduced, the new products will enhance the company’s turnover, profitability and ultimately rub-off positively on the shareholders.

For the year under review, Mrs Ayeni said while the revenue from the sales of salt increased by 24 percent to N14.82 billion, sales from seasoning increased by 127 per cent to N0.54 billion.

Highlighting on the firm’s last year performance, Mrs Ayeni revealed that the company recorded a turnover of N18.29 billion, representing a 13 percent increase over the N16.18 billion in the previous year.

The profit after tax, according to her, increased by 15 percent from N2.11 billion in 2015 to N2.42 billion, while earnings per share also increased from 79 kobo to 91 kobo. As a sign of stability, the company has N2.45 billion in cash reserves for the year under review.

Unanimously, the shareholders approve the payment of 70 kobo per share dividend, representing a pay-out ratio of 77 percent at N1.85 billion, an improvement from the previous year when it paid N1.46 billion to shareholders.

On her part, Executive Director, Commercial, Ms Fatima Aliko Dangote, also assured the shareholders of good returns on their investments, noting that the company was doing so much to enhance their stakes on a consistent basis.

She said, “We are expanding, we are investing on new refinery for our salt and we are also looking at innovations, we are bringing other products that are going to be launched this year. So, hopefully, 2017 will be a better year for the company and also importantly for the shareholders.

“We placed shareholders interest so high because they have actually trusted us, they have invested in our business and as you can see, regardless of our challenges, we are still able to push really hard and declare profits. We have to take our shareholders very seriously so that they can keep trusting us, and by so doing, more people will keep buying our shares and hold us in high regards.”

Mr Ferrer had expressed satisfaction at the efforts of the agency leadership to sanitise the food market by getting rid of fake and substandard products and turning the heat on the perpetrators, adding that the efforts had paid off.

He however explained that he observed an infringement on the directives of the Agency on the packaging of industrial salts by some undesired elements.

According to him, contrary to the directives of the NAFDAC that industrial salt should only be packaged in 50kg, his organization observed the existence of the industrial salt in small sizes as 5kg, 10kg, 15kg, and 20kg.

He reasoned that someone somewhere has been has been repackaging the 50kg size to smaller sizes and supplying to the markets, a development he said is dangerous as people may be misled to be buying the industrial salt in place of the table salt which comes in the smaller sizes.

The Dangote Salt boss therefore enjoined NAFDAC to help see to the development as the unsuspecting consumers might not know the difference between the iodized table salt and the industrial salt.

In her response, Mrs Oni thanked the NASCON management for the confidence reposed in her agency. She said the observation was one of the many infringements her agency has been battling tooth and nail and that the NAFDAC management would not relent in the fight against every infringement to see that the people have access to right quality products always.

She advised companies in the food sector to have a Post-Market Surveillance (PMS) unit in their establishment for self-regulation of their market to make enforcement easier for NAFDAC.

Related Topics:NASCONNASCON shareholders
Up Next