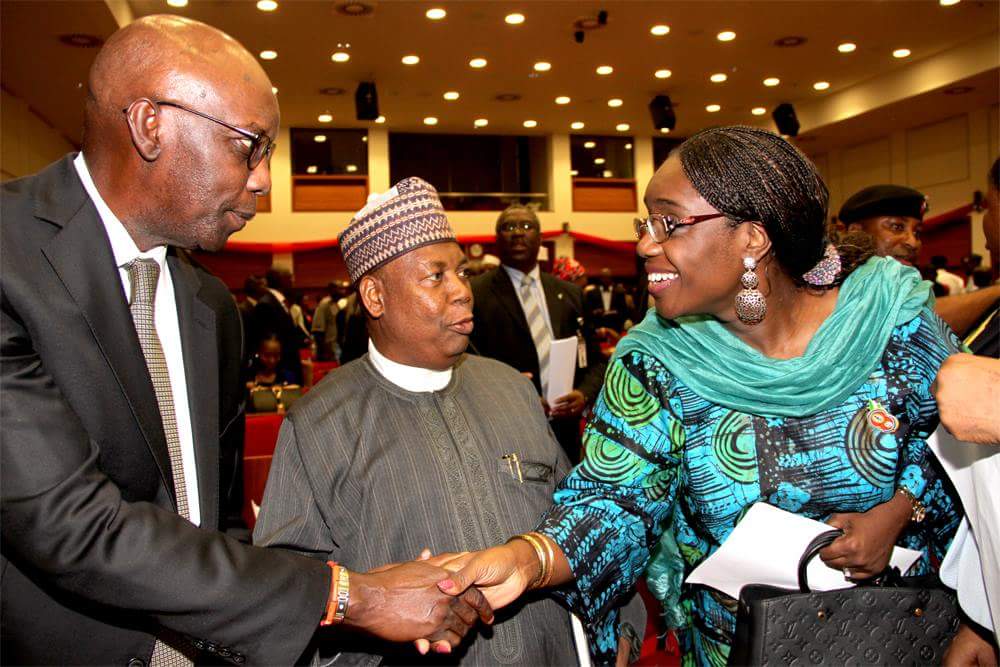 A report by Premium Times has disclosed that the leadership of the National Assembly is using a ‘secret’ it has about the Minister of Finance, Mrs Kemi Adeosun, to get her approve funds for the second arm of government.

According to the report, some Senators provided insights into why Mrs Adeosun has remained exceptionally generous in funnelling billions of Naira to parliament, sometimes even against the wishes of her bosses at the presidency.

The newspaper had in a series of reports revealed how the Minister repeatedly enriched lawmakers, including by funding unapproved projects and making unappropriated cash payments to the legislative arm of government.

In April, it reported details of the controversial release of N10 billion to the National Assembly by Mrs Adeosun.

The lawmaking arm then wasted the money on exotic cars and dubious contracts. Some of the companies to which the contracts were awarded were not even registered with the Corporate Affairs Commission (CAC) and the Bureau of Public Procurement (BPP).

In June, Premium Times reported how the Minister spent about N12 billion to finance projects the presidency wanted removed from the 2017 budget.

The Minister’s action generated uproar nationwide, especially among civil society activists who wondered the motive of such curious financial relationship with federal lawmakers reputed for being self-centred, greedy and corrupt.

Two months of asking questions is beginning to provide some insights into the real reason the Minister has maintained such cosy relationship with the lawmakers.

At least five senators who spoke to the newspaper said the abnormal actions of the Minister were activated by the top echelon of the legislature.

“We have never had a Finance Minister so generous to the National Assembly,” one senator said. “But it is not for nothing. The truth is we were able to dig up something unsavoury about her and our leaders are holding her by the jugular

One ranking Senator simply said, “The Minister is being gagged by our people”.

He however said he was not sure what his colleagues were using to “gag” the Minister.

Yet another Senator said, “What I am aware of is some of our people said they have an ammunition they can use to silence her. That has given way for the leadership (of the National Assembly) to intimidate her, knowing that they could get her out of her job if she doesn’t cooperate.”

Another ranking Senator, who also asked not to be named, said Mrs Adeosun was indeed being blackmailed by lawmakers.

“Not everything is out in the public because every single one of us are beneficiaries of this situation,” he said. “But I can tell you the woman is being harassed and blackmailed into doing many things she would ordinarily not so. She is helpless in the hands of our people.”

The Minister is said to be afraid of being exposed or investigated by the legislative body, which may lead to her losing her position.

Premium Times learnt that the real “ammunition” is known only by a few high profile leaders of the National Assembly who have turned it into what an official called “a secret tool for extortion.”

But when contacted, Senate President, Mr Bukola Saraki, said the Finance Minister was not being blackmailed in any way.

“There is nothing like that and I am very sure of that,” Mr Yusuph Olaniyonu, spokesman to Mr Saraki, informed Premium Times. “If there is anything like that, I would know. Oga (boss) will hint or she will tell me. There is absolutely nothing like that. It is not true.”

Mr Olaniyonu described Mrs Adeosun as the “most cooperating minister” who answers lawmakers’ summons at all times. But he insisted that her conduct was not because of fear of any blackmail.

Spokesperson to Mrs Adeosun, Mr Oluyinka Akintunde, also denied his boss was being blackmailed by lawmakers.

“I wish to state that there is no such thing,” Mr Akintunde said. “The Honourable Minister has always operated within the ambit of the law in the discharge of her responsibilities.”

However, the newspaper said it was working hard to uncover what the real “ammunition” being used against the Minister is, promising to provide updates as information becomes available.