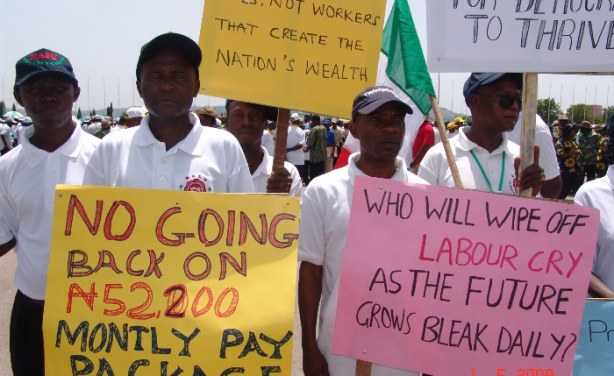 The panel set up by the Federal Government to look into the issue of minimum wage in the country has submitted its report.

Chairman of the Technical Committee on Minimum Wage and Palliatives, Mr Chris Ngige, who doubles as the Minister of Labour and Employment, stated that his team came up with an all-encompassing recommendations in the areas of salaries, allowances, promotions and pensions both at the state and federal levels; affordable housing and transport to help out suffering workers of Nigeria.

While presenting the report to the main Committee on Minimum Wage and Palliatives headed by the Secretary to the Government of the Federation (SGF), Mr Babachir David Lawal, the Minister said the welfare of Nigerian workers was paramount to the President Muhammadu Buhari administration.

He noted that the minimum wage was last reviewed in 2010 and signed into law in 2011 under the previous administration of President Jonathan, adding that the current exercise was in compliance to a five –year constitutional provision on minimum wage review.

Mr Ngige said further that the submissions of his committee were in two volumes comprising the Minimum Wage and the Palliatives.

“We have no problem in tackling the issue of the minimum wage. We recommended a 29-man Minimum Wage Committee to be chaired by a reputable Nigerian, who will be neutral and non-partisan, with labour and civil service experience so that the person would be on a familiar turf,” the Minister recommended in his report.

He also said there would be a secretary with the secretariat of the committee to be domiciled at the National Salaries Income and Wages Commission.

Eight persons are expected to represent each of the following; the Federal Government, the organized labour, organized private sector and three members representing the state government to be drawn from the Governors Forum, the All Progressives Congress (APC) Governors Forum and the People’s Democratic Party (PDP) Governors Forum.

On palliatives, the Minister said the committee identified dwindling economic fortunes of the Federal Government as the major problem having taken submissions from the Ministry of Petroleum Resources, Budget and Planning as well as the Ministry of Finance.

“We also looked at the mass transit scheme. And in housing, we recommended that government through its ministries and agencies should give more support for mass housing for civil servants by invigorating the Federal Mortgage Bank, as well as assisting the housing schemes being undertaken by the labour unions and further support workers to venture into agriculture,” Mr Ngige said.

In his remark, the SFG thanked the technical committee especially the organized labour for their cooperation and input into the report and restated the commitment of the Federal Government to study and take it to fruition.

“We have to work hard and diligently too, to conclude our report and make a submission to government because I know that this government is favourably disposed to the improved welfare of Nigerians as a whole.

“We should take the opportunity of this disposition to conclude our report and send it to the President for consideration,” he said.

In May 2016, the Federal Government effected an upward review of the pump price of premium motor spirit to between N143 to N145 and on May 17, set up a committee comprising labour and government to seek out palliatives to cushion the effects of the pump price increase as well as look into the review of the minimum wage which is a constitutional matter.