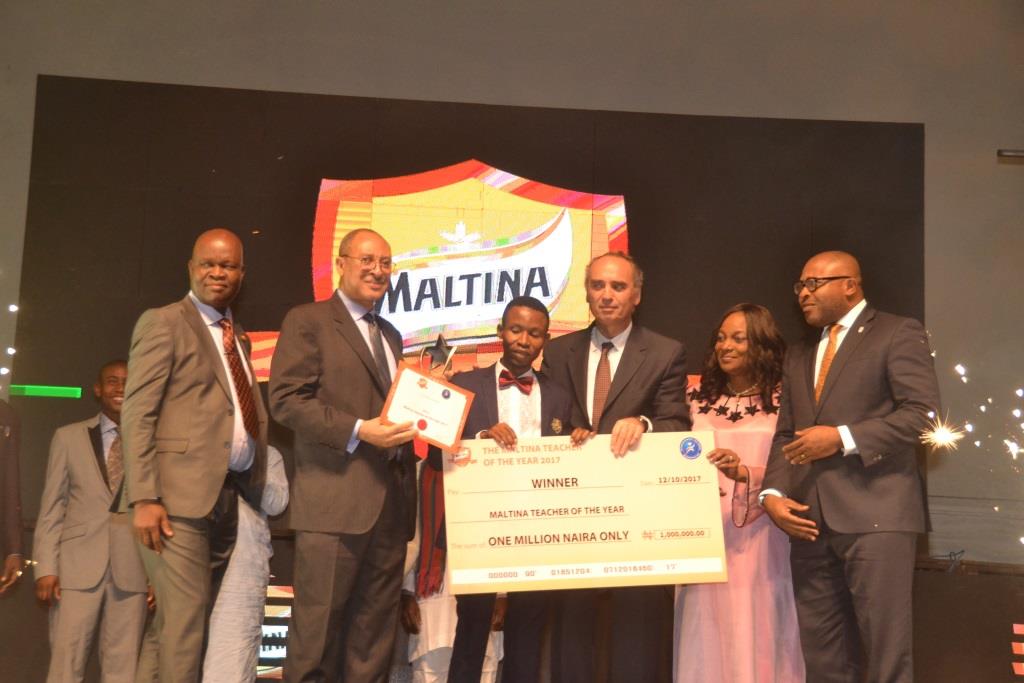 A teacher with Mastercare International School, Asaba, Delta State, Mr Felix Udochukwu Ariguzo, has emerged the Maltina Teacher of the Year for 2017 in the highpoint of the competition’s grand finale held in Lagos on Thursday.

For the feat, Mr Ariguzo was rewarded with N1 million in addition to N500,000 he received as Delta State champion.

He will also receive N1 million every year for five years, a training programme abroad and a block of six classrooms built at his school.

Mr Ariguzo, a Biology and Chemistry teacher, revealed that he draws inspiration for teaching from his love for service and knowledge building.

He thanked Nigerian Breweries for the gesture and enjoined other corporate organisations to follow the worthy example.

“Today, I am very happy and proud that Nigerian Breweries has shown that teachers’ rewards are both in heaven and on earth,” he enthused.

The 38 year old son of a teacher maintained that teaching is not about earning a living, but giving life a meaning and that a strong passion and emotional stability are vital in the teaching profession.

Each of the 27 State Champions received N500,000 while the first and second runners-up got an additional N1 million and N750,000 respectively.

While welcoming guests at the event, the Managing Director of Nigerian Breweries Plc, Mr Johan Doyer, explained that in line with its philosophy of winning with Nigeria, the company resolved in 1994, to play a more active role in the development of education in Nigeria when it established the Nigerian Breweries – Felix Ohiwerei Education Trust Fund with a commencement capital of N100 million.

The fund, according to him, has impacted over 25,000 students across the country, built 31 classroom blocks and 30 libraries equipped with furniture and books in both primary and secondary schools across various communities.

He added that in 2015, the company’s intervention in education was expanded to include teachers when the Maltina Teacher of the Year initiative was launched.

The initiative he said, was hinged on the realization that teachers hardly get the recognition they deserve in spite of the pivotal role they play in determining the quality of education and the future of our country.

“Today’s grand finale gives us an opportunity to share happiness with our teachers and I hope that this initiative reminds everyone to support and encourage our teachers always,” Mr Doyer said.

He equally thanked the stakeholders in the education sector for their support especially the Federal Ministry of Education, the ministries of education in all the states across the country, the Nigerian Union of Teachers, the All Nigeria Conference of Principals of Secondary Schools (ANCOPSS), the Teachers Registration Council of Nigeria, amongst several others.

In her remarks, Deputy Governor of Lagos State, Mrs Idiat Oluranti Adebule, who was represented by Mr Adesina Odeyemi, a Permanent Secretary in the Ministry of Education, described teachers as the most critical asset of the nation and thanked Nigerian Breweries for the initiative she described as a big boost to teachers and the teaching profession.

The Maltina Teacher of the Year initiative has so far produced 69 State Champions and three overall winners.

In 2015, Mrs Rose Nkemdilim Obi from the Federal Government Girls College, Onitsha, Anambra State emerged as the Maltina Teacher of the Year at the maiden edition while Mr Imoh Enoh Essien, a teacher at the Special Education Centre for Exceptional Children, Uyo, Akwa Ibom State won in 2016. 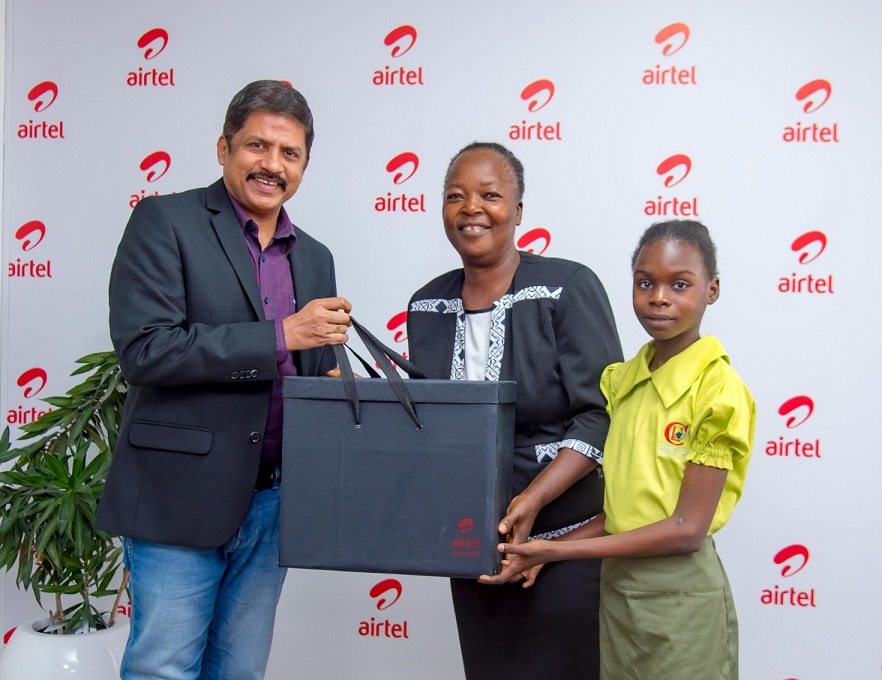 Nigerian children have been reassured of the commitment of Airtel Nigeria to accelerating digital learning in the country.

During the ceremony at the Airtel headquarters in Ikoyi, Lagos, Miss Anuguo had the rare privilege to function in the capacity of Airtel Nigeria’s CEO and MD, Mr Surendran Chemmenkotil, as she emerged CEO for the day.

Using this privilege and executive powers as CEO, she remarkably led an advocacy campaign for Nigerian children, especially the differently abled, as she signed a policy for Airtel Nigeria to continue to pursue opportunities that will accelerate digital learning for all children in the country, regardless of ethnicity, location, or ability.

Impressed with her performance, Mr Chemmenkotil awarded the sum of N1.5 million to Miss Anuguo to support her education and her advocacy for Nigerian children as a key influencer.

“I am also happy to offer Miss Anuguo a scholarship of N1.5 million to support her education. This gesture is to encourage her to continue her advocacy for differently abled children as she champions their cause as a key influencer. Thank you for all you do, Anuguo,” he said.

The Airtel Nigeria boss also stated that, “Airtel Nigeria joins UNICEF and the entire world to mark World Children’s Day. As a company, Airtel is committed to Nigerian children and will continue to support initiatives that will create a better future for all children.

“We are happy to mark this day with Esther as well as all Nigerian children, and we shall continue to support platforms and initiatives that will lead to a better future for all children in our dear country, Nigeria.”

World Children’s Day was first established in 1954 as Universal Children’s Day and is celebrated on November 20 each year to promote international togetherness and awareness among children worldwide and improve children’s welfare. 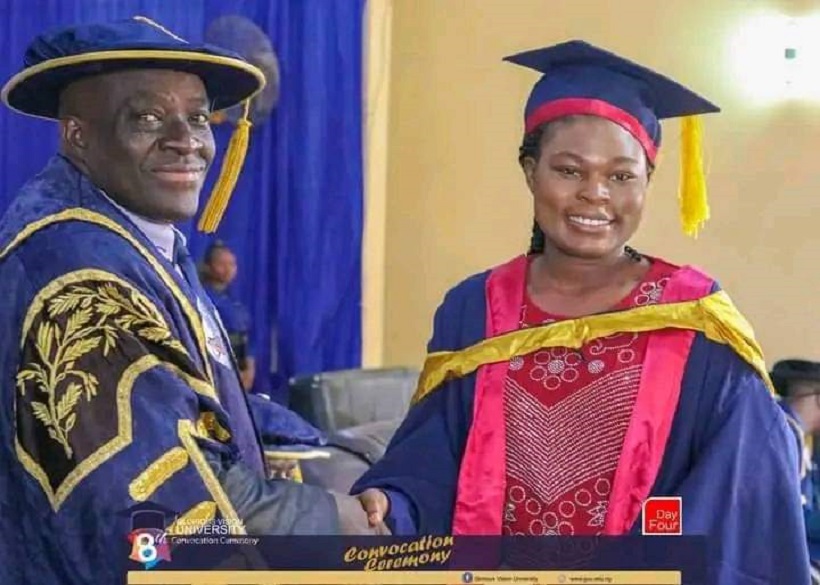 A student of the Department of Chemical Science of Glorious Vision University (GVU), Ogwa, Edo State, Miss Egbeyinka Elizabeth, was the cynosure of all eyes at the institution’s 8th convocation ceremony held recently.

At the programme, Miss Egbeyemi was commended for her brilliance and charged to continue to be a good ambassador of the institution by imbibing the knowledge she has acquired from the school.

In his speech at the convocation, the Visitor and Chancellor of Glorious Vision University, Pastor Emmanuel Segun Awojide, congratulated the graduating students, saying the accomplishment was worth celebrating.

He also tasked Nigerians to keep praying for the country, especially as the nation prepares for the general elections in 2023, stating that Nigeria, especially the church, is in dire need of the right leaders to steer the ship of the country to the Promised Land.

The cleric, who doubles as the National Vice President and LAWNA Territorial Chairman of The Apostolic Church Nigeria (TACN), emphasised that Nigerians must cry out to God, who he said owns Nigeria.

The man of God, represented by the Vice Chairman of LAWNA Territory, Pastor Okpako Uyeh, also used the occasion to thank members of the church for supporting GVU, which used to be known as Samuel Adegboyega University (SAU).

“Let me thank all sponsors and members of The Apostolic Church Nigeria LAWNA Territory for their overwhelming support to the growth and development of the Glorious Vision University despite the current economic hardship in the country. This sacrifice will not go unrewarded in Jesus’ name,” Pastor Awojide, who is also the National Chairman of the Christian Pentecostal Fellowship of Nigeria (CPFN), stated.

A total of 100 students graduated with various degrees at the 2022 convocation attended by several persons. The school, established by TACN, awarded diploma degrees to three students, first degrees to 94 students and second degrees to four students.

Adeniran Praises Makinde for Allocating 18.78% of 2023 Budget to Education 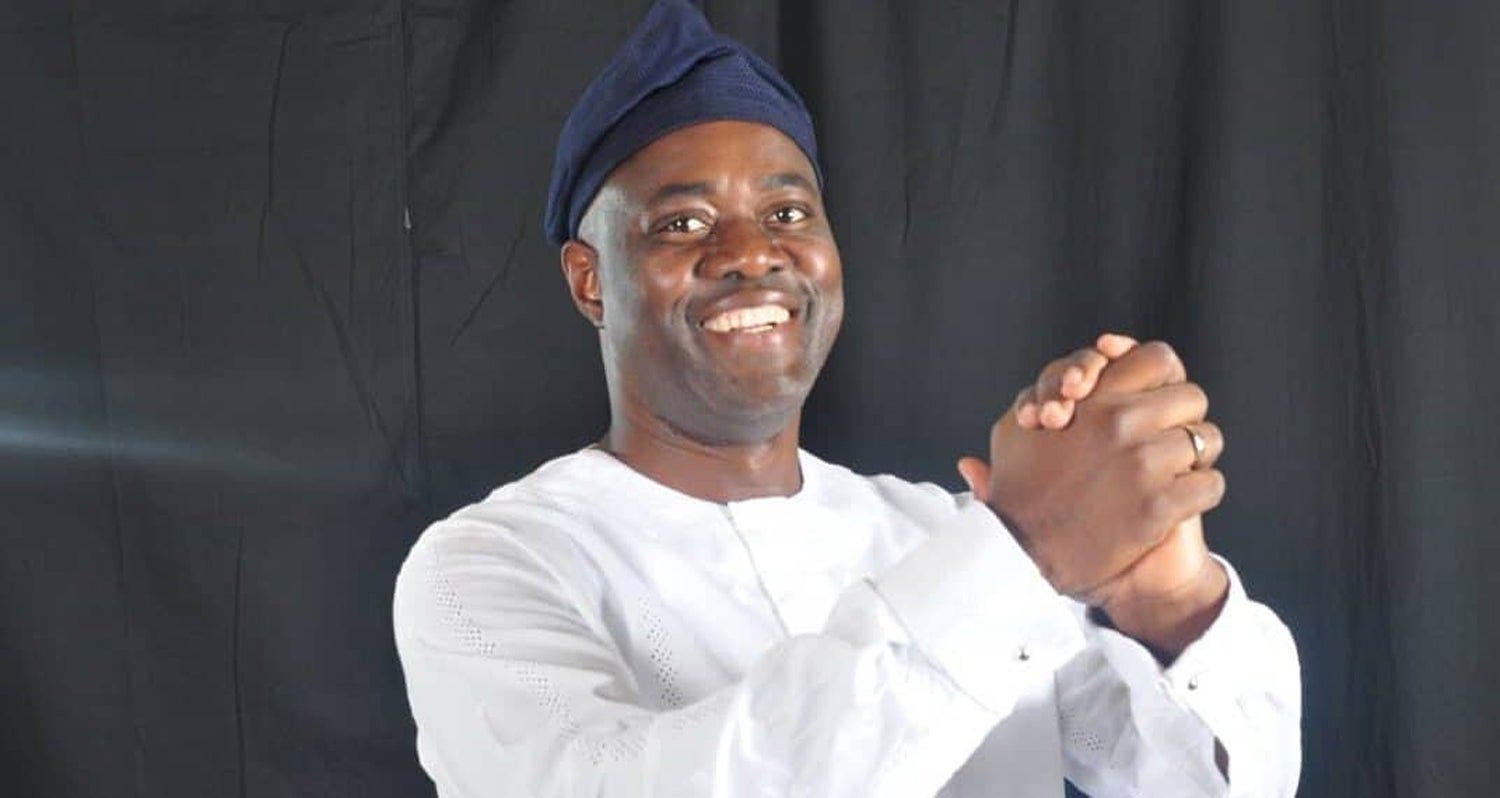 The Governor of Oyo State, Mr Seyi Makinde, has been applauded by the Chairman of the Oyo State Universal Basic Education Board (Oyo SUBEB), Mr Nureni Aderemi Adeniran, for allocating more funds to education in the 2023 budget.

Speaking recently on a live programme on the Oyo State Broadcasting Corporation (BCOS) in Ibadan, the state capital, the educationist said this was commendable.

According to him, education has the second largest allocation in the proposed 2023 appropriation bill presented to the Oyo State House of Assembly by Mr Makinde.

He said with a budget of N58.2 billion, the government has recorded an unprecedented affection for education.

Mr Adeniran said Governor Makinde had maintained an unbroken record of allocating huge funds for the overhaul of the sector, especially the basic education sub-sector he supervises.

“Governor Makinde’s record of allocating funds for education conforms to UNESCO standards of 15-20 per cent of the budget. In fact, this time, education is 18.78 per cent of the total budget proposal,” he said.

Speaking further, the Oyo SUBEB chief lauded the current administration for consistently maintaining an 18 per cent to 22 per cent budgetary allocation.

He insisted that this has helped the state in regular payment of the Universal Basic Education Commission (UBEC) counterpart funding and received matching grants, “enabling us to execute numerous projects in the education sector.”

“Oyo State Universal Basic Education Board has so far completed over 56 model schools and constructed and renovated over 700 classroom blocks across Oyo State, among other projects,” he affirmed.

He, therefore, appealed to residents of the state to re-elect Governor Makinde for a second term, saying his efforts to make Oyo better could be further actualised with continuity.