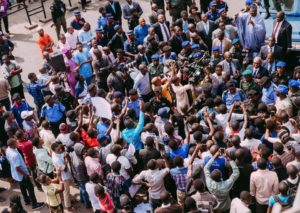 As part of efforts to meet the end of January 2017 deadline for the reopening of the Ladoke Akintola University of Technology (LAUTECH) in Ogbomoso, Oyo State, the state Governor, Mr Abiola Ajimobi, has disclosed that a total of N500 million has been earmarked to achieve this.

Mr Ajimobi made this disclosure on Monday while addressing some students of the school, who staged a peaceful protest to his office in Ibadan.

During his speech, the Governor said he had to suspend the State Executive Council meeting to address them because of his concern for their plight and to enable them to hear directly from him about the ongoing concerted efforts to douse the tension that had assumed several dimensions since the strike began.

“I had to suspend the State Executive Council meeting to meet with you when reports got to me that students were at the gate and were eager to hear directly from me.

“The crux of the matter is that government lacks fund. I’m sure all of you are aware of the mounting financial difficulties confronting the country, in which we have a fair share. But nevertheless, we (Oyo and Osun states) have reached a solid agreement on how to contribute funds to start with.

“We are contributing an initial N250 million each as allocation to LAUTECH to achieve the set goal of getting the university reopened. This is in continuation of our continuous search for every opportunity to improve education standards in Oyo State.

“We have given instructions that the school must be reopened before the end of this month come rain or shine. But you must know that part of education is what they call civic responsibility and tomorrow leadership is about being good observers of rule of law today,” Mr Ajimobi said.

LAUTECH was established in 1990 in the old Oyo State, which now comprised Oyo and Osun States, while the two states had maintained joint ownership of the college since 1991 when Osun was excised.

Academic and non-academic staff at LAUTECH had been on strike since June 9, 2016, in protest against delay in settling their salary arrears, a development the governor blamed on the dwindling fortunes of the two owner states.

The Governor, who charged the students to eschew violence and disobedience to constituted authority in driving home their demands, said dialogue remained the most potent tool to resolve any disagreement.

He assured the students that the stakeholders had slated another meeting for Wednesday to fine tune the resumption process and to discuss other issues that would nip in the bud future disagreement between the management, the students’ body and the visitors to the university.

A former President of the Student Union Government of LAUTECH, Mr Bakare Olatunde, who spoke on behalf of the protesters, apologized to the Governor on behalf of the students for the unruly conduct of some of them in spite of assurances that the school would be reopened soon.

He, however, pleaded with the governor to collaborate with Mr Aregbesola and ensure that normalcy returned to the university latest by the end of January as promised.

He said, “We are sorry for our conduct sir. But, we just want to plead that this promise you made be fulfilled.

“We have heard times without number of government’s unfulfilled promise to reopen the school. We want you to please do your part to help in speeding up the process.”