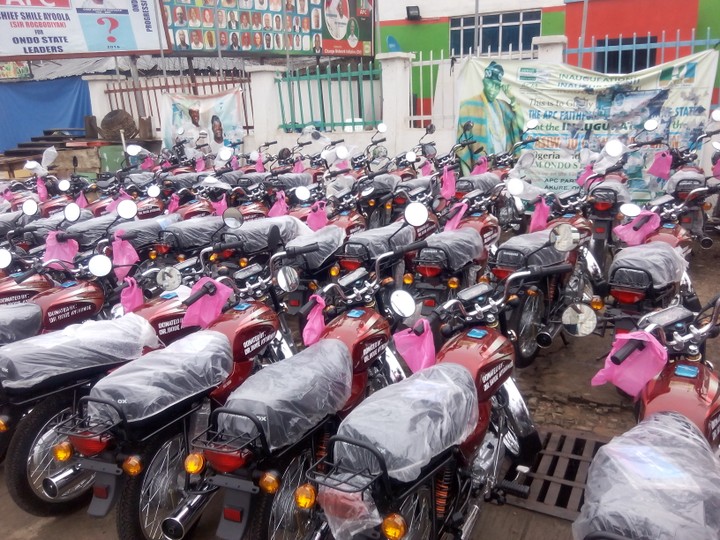 In bid to ensure maximum engagement of Extension Workers for the actualisation of Niger State government target on Rice cultivation, Soya beans and Cotton, Governor Abubakar Sani Bello on Monday distributed 100 motorcycles to Extension Workers and Co-operatives Staff as part of the CBN-Anchor Borrowers Programme.

The distribution of the motorcycles was the first phase of the 318 motorcycles to be distributed to extension workers by the government.

Mr Sani Bello stated that the procurement and distribution of the motorcycles to Extension Workers was a deliberate effort at easing their accessibility to farmers and fast-track development in that sector, ensure food security and exportation.

The Governor noted that government and all the relevant stakeholders in the sector must play their parts in order to avoid the impending danger that is characteristic of a monolithic economy. He enjoined the Extension Workers to utilise the Motorcycles and ensure total mobilization of the farmers to facilitate government’s quest towards achieving food security and export.

Commissioner for Agriculture, Mr Kabiru Abass disclosed that the distribution of the Motorcycles to the Extension Workers would boost their morale, expand their coverage area and increase productivity.

He expressed appreciation to the Governor for supporting the CBN-ABP initiative by ensuring payment of counterpart funds for all agriculture-related programmes such as the FADAMA III, RAMP II, Value-Chain Development Programme and the CBN-ABP in the state.

Coordinator of the State Programme Monitoring Team (PMT), Mr Ahmed Mohammed Kontagora explained that the CBN-ABP is an initiative aimed at improving the commercial and productivity levels of the farmer through the market-driven approach.

He said that the state has been up to date in loan recovery and attributed the success recorded to the resilience and cooperation from the Extension Workers and Co-operatives Officers.

In their separate goodwill messages, Mr Mohammed Manko, Deputy Chairman of All Farmers Association of Nigeria (AFAN) and Mr Idris Abini, State Secretary of Rice Farmers Association of Nigeria (RFAN) said the Motorcycles would boost the morale of the Extension Workers, strengthen their relationship with the farmers and make the programme a successful one.

Wema Bank Employees Donate Salaries to Save Children at Hospitals