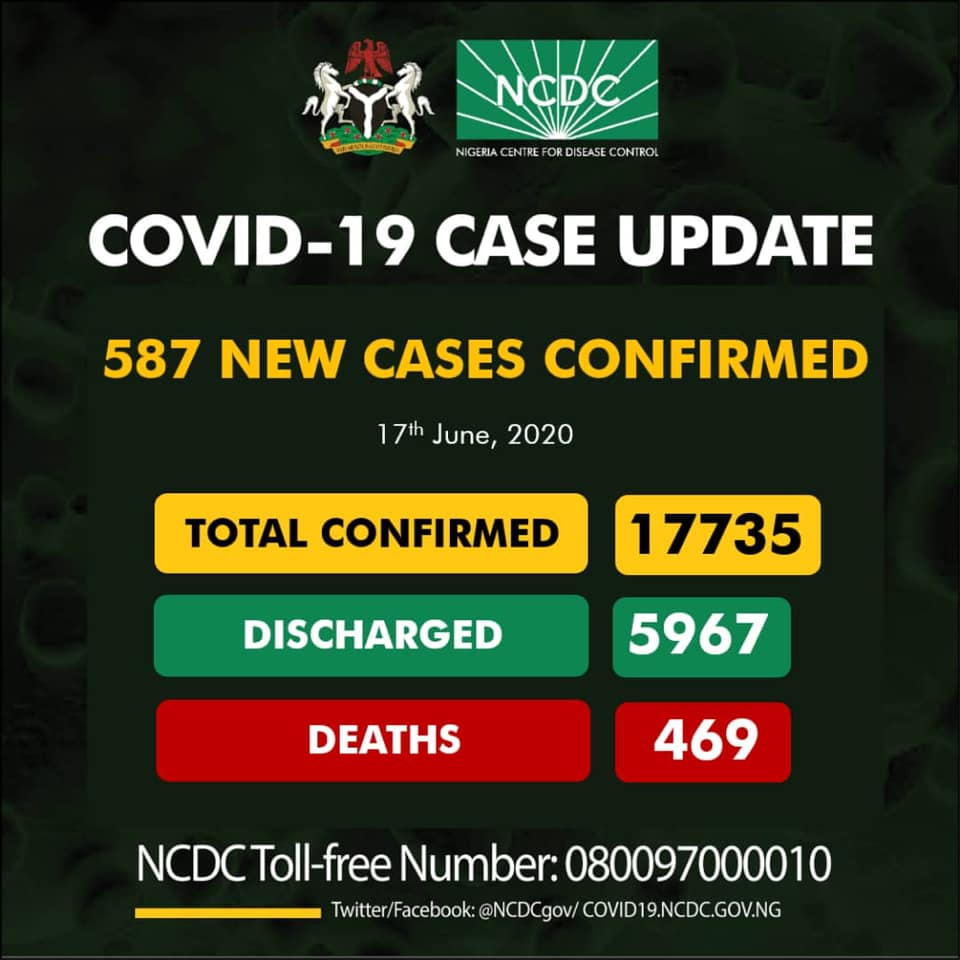 A total of 14 new deaths believed to be caused by coronavirus disease (COVID-19) have been reported in Nigeria in the last 24 hours.

The Nigeria Centre for Disease Control (NCDC), in an update on Wednesday night, said deaths from the virus in the country jumped to 469 from 455 of the previous day.

Furthermore, the agency said the country recorded 587 new cases of COVID-19 during the period under consideration, bringing the total number of confirmed cases to 17,735, while 5,967 persons have been successfully treated of the virus and discharged.

A breakdown of the new cases in the last 24 hours showed that Lagos reported 155 confirmed cases followed by Edo State with 75 new cases.

Abuja has reported 67 fresh cases in the last one day, Rivers State has 65 new cases, Oyo State with 56, Delta State with 50, Bayelsa State with 25, while Plateau and Kaduna States recorded new 18 cases each.

In addition, Enugu State reported 17 new cases, Borno State had 12, same with Ogun State, while Ondo State recorded 7, Kwara State with 4, Kano and Gombe States with 2 cases each and Sokoto and Kebbi States with one each.

Nigeria recorded its first coronavirus case on February 27, 2020 through an Italian who came into the country via Lagos and had a business meeting in neighbouring Ogun State.

He was successfully treated and discharged by health officials at the Mainland Infectious Disease Hospital in Yaba, Lagos State, which was used as an isolation.

The virus has claimed some prominent persons in the country one of which was the Chief of Staff to President Muhammadu Buhari, Mr Abba Kyari, who died at a private health facility in Lagos.

This week, a prominent politician in Lagos, Mr Bayo Osinowo, otherwise known as Pepperito, died from the disease. He was the Senator representing Lagos East Senatorial District at the National Assembly.

Related Topics:covid-19 deaths
Up Next