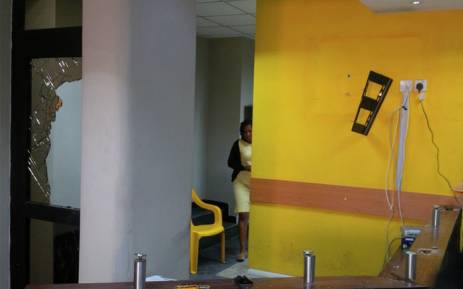 Some Nigerian youths on Thursday stormed the head office of MTN Nigeria in Abuja, ransacking the firm and attacking its customers.

The angry protesters also demanded the relocation of the South African company and South Africans from Nigeria.

It was gathered that today’s attack is in retaliation for the xenophobic attacks on Nigerians and their businesses in South Africa.

During the demonstration, the National Association of Nigeria Students (NANS), which organised the protest, gave South Africans living in Nigeria 48 hours leave the country or face further attacks.

President of NANS, Mr Aruna Kadiri, informed Reuters that, “We are not going to kill like them and that is why we have asked their citizens to leave, but we will sure destroy their businesses.”

A spokesman for MTN claimed the protesters vandalised some of its properties after they allegedly forced their way into the firm’s premises.

The telecoms giant also claimed some of its phones were carted away from their Abuja office, while some of its customers were attacked.

Recall that earlier this week, the Nigerian government summoned South African envoy over the attacks on Nigerians in the country and he appealed for calm from both countries.

Nigeria and South Africa are the two rival and biggest economies in Africa.