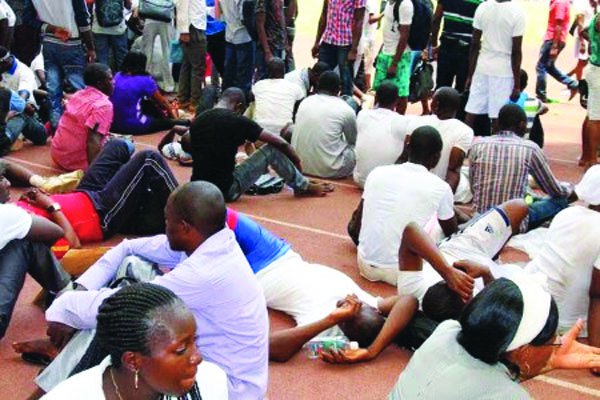 Federal Government has disclosed that it plans to employ additional 350,000 unemployed graduates under its N-Power Volunteer Corps of the Social Investment Programmes (SIP).

In view of this, the President Muhammadu Buhari-led administration has requested from the National Assembly an appropriation of N157.75B in the 2017 budget estimates for the N-Power scheme.

This comes as different sections of the executive arm of the FG are now defending the 2017 budget proposals before the legislature.

The N-Power is just one of the many SIPs that has so far drawn the interest and praise of Nigerians across board.

Out of the N-Power 2017 N157B 2017 budget “350,000 unemployed graduates more would be hired and trained, alongside 50,000 non-graduates youths to be engaged as artisans and in other creative ventures, a statement by the Senior Special Assistant on Media & Publicity to the Acting President, Mr Laolu Akande, disclosed.

The statement said under the N157.75 billion, a sum of N4.5 billion has been earmarked for the Science, Technology, Engineering and Mathematics, STEM program to support young Nigerians in building skills in those disciplines.

“While we were able to engage 200,000 unemployed graduates last year, we will do 350,000 more this year,” he assured, adding that some of the teething problems are giving way to lessons that would smoothen implementation under the 2017 budget.

Equally, under the 2017 budget proposals now before the National Assembly, Mr Akande disclosed that about N75 billion has been allocated for the National Homegrown School Feeding Programme, which will provide one hot meal a day to 5 million primary school pupils. He explained again, that this would certainly be an improvement on how far the feeding programme has been implemented so far under the 2016 budget which has so far attained the feeding of about one million pupils.

The spokesperson to the Acting President also stated that under the 2017 budget a sum of N112.2 billion has been allocated for the Government Enterprise and Empowerment Programme aimed at providing interest-free loans to up to 1.2million market men and women, traders, artisans, youths and farmers.

He said further that under the GEEP, beneficiaries will receive between N10,000 and N100,000 loans with a one-time 5 percent administrative fee.

Already under the 2016 budget, over 20,000 Nigerians in about 14 states and counting, have been benefiting from GEEP.

Similarly, the Conditional Cash Transfer which has kicked off in 9 states would be further expanded under the 2016 budget and will reach more states and much more Nigerians.

The plan in 2016 budget targets one million poorest and vulnerable Nigerians. And in the 2017 budget an additional N54.98B has been allocated for the continuation of the N5000 monthly social safety net payments to the poorest Nigerians.

Mr Akande further clarified that while President Muhammadu Buhari has further approved another N500 billion this year for all the social intervention programmes, N100 billion out of it has been allocated for the Family Homes Fund as already announced by the Ministry of Finance.

Related Topics:n-powerunemployed Graduates
Up Next