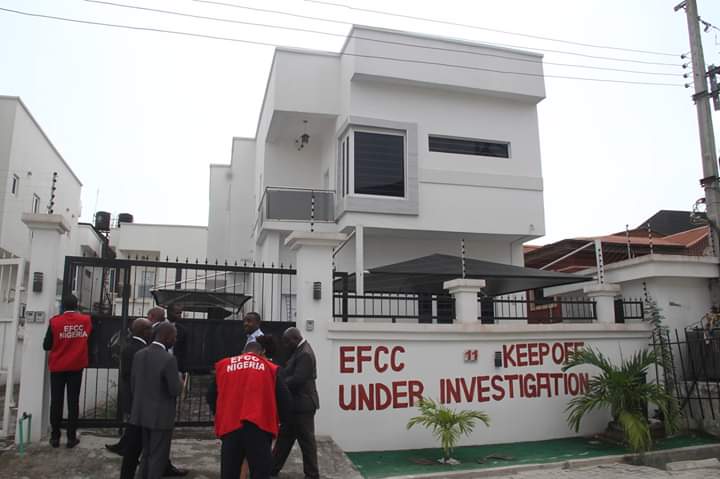 The items, which include a total of 116 cars and 20 landed properties scattered in Edo, Rivers and Lagos States, were seized by the Economic and Financial Crimes Commission (EFCC) and handed over to the financial institution on Wednesday, November 28, 2018.

Trouble began for Mr Osasogie after a petition he wrote to the anti-corruption agency against E-tranzact in March 2018.

The commission had, however, investigated Mr Osasogie’s business interests, following receipt of a counter-petition written by e-tranzact against him and one of his companies, SmartMicro.

SmartMicro was said to have approached e-tranzact in 2012 for the deployment of bulk purchase solution called “Corporatepay” to facilitate payment of salaries of Delta State employees in microfinance banks.

It was also alleged that e-tranzact configured an additional outbound fund transfer solution called “Fundgate” in 2017, which required SmartMicro to maintain a pre-funded settlement account with First Bank Plc for settlement of account it had initiated.

Mr Osasogie, in his statement to the EFCC, confessed to have committed the crime, stating that he created fraudulent and imaginary monies through the aid of Fundgate Financial Application from the company.

Consequently, Mr Osasogie was arraigned alongside his firms-Platinum Multi-Purpose Co-operative Society, SmartMicro Systems Limited and Platinum Smart Cruise Motors Limited on May 24, 2018 before Justice Justice Mojisola Dada of the Special Offences Court sitting in Ikeja on a 14-count charge bordering on stealing to the tune of N11.5 billion.

One of the counts reads: “That you, Michael Obasuyi Osasogie, Platinum Multi-Purpose Co-operative Society, SmartMicro Systems Limited and Platinum Smart Cruise Motors Limited, sometime in the year 2016 in Lagos within the jurisdiction of this Honourable Court, conspired to commit felony, to wit: stealing of the sum of N11,498, 944, 038.29 property of First Bank Nigeria Ltd.”

He pleaded guilty to the charge preferred against.

During his trial, an investigator with the EFCC, Orji Chukwuma, had told the court how the proceeds of crime were housed in some new generation banks.

Led in evidence by the prosecution counsel, Rotimi Oyedepo, Chukwuma had told the court that “SmartMicro Systems Limited assumed a position of a fictitious microfinance bank in Nigeria through a software, Micro switch Server 1.1 created by the defendant as well as two genuine microfinance banks, which he used to carry out his fraud.

“The defendant later opened an account with First Bank Plc and subsequently raised an overdraft from his fictitious microfinance bank for his account in the bank, which it ignorantly paid.”

In his further testimony, the witness had told the court that when e-tranzact disconnected from the chain, all the transactions carried out by the defendant collapsed on his own account with First Bank, thereby leading to the discovery of the fraud.

The prosecution counsel had, therefore, urged the court to convict the defendant on counts one to 14, according to the law.

Counsel to the first and second defendant, Osasu Ogebor, had told the court that his clients went into a plea bargain in order to give out what does not belong to him.

“It is not enough for the accused person to say I am sorry for what he has done. But from his inner heart, he is absolutely sorry, my Lord”, Ogebor had pleaded.

Counsels to the third and fourth defendants also aligned themselves with Ogebor’s prayers.

Delivering her judgment, Justice Dada convicted the defendant on all the counts and sentenced him to one-year imprisonment.

The Judge also ordered the forfeiture of defendant’s 116 buses, 20 properties and monies in various accounts to First Bank Plc.

At the hand- over ceremony, which held in one of the forfeited houses at Osapa London, Lekki-Lagos, Kaina Garba, Head Asset Forfeiture and Recovery Management Unit of the EFCC, Lagos office, handed over the documents and keys to the properties to Gabriel Edobor, Head, Remedial and Classified Assets Management Department, First Bank Plc and Eme Godwin, Group Head, Legal Unit, E-transact.

In a show of appreciation, both Edobor and Godwin thanked the EFCC for ensuring the recovery of the properties through diligent and uncompromising investigative efforts.

Fitch Upgrades UBA to ‘B+’ with Stable Outlook