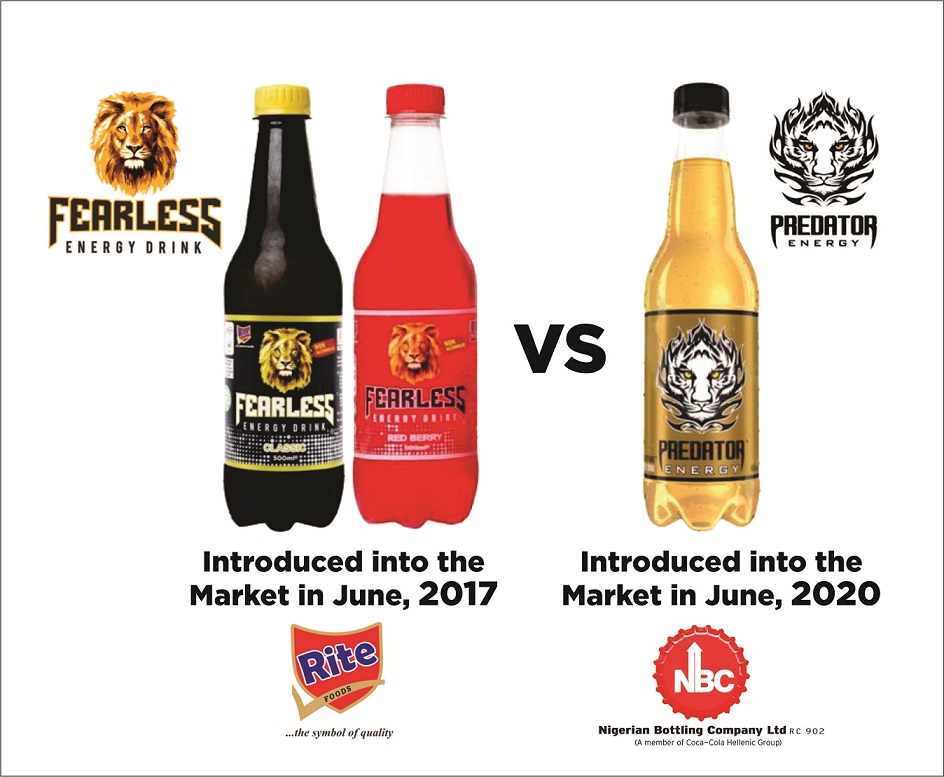 The contempt proceedings suit filed by Rite Foods Limited against the Nigerian Bottling Company (NBC) and its managing director, Mr Mathieu Seguin, at the Federal High Court, Lagos has been adjourned to September 22, 2021.

The matter came up for the first time on July 12, 2021, before Justice Allagoa but the counsel to Rite Foods, Mr Muyiwa Ogungbenro, urged the court to fix another date for the hearing of all pending applications.

He explained that the reason for the request was because there were several applications before the court that Rite Foods needed more time to respond to.

This prayer was not objected to by counsels to the NBC, Mr Marki Mordi, and the MD of NBC, Mr Opasanya (SAN).

During proceedings, Mr Ogungbenro informed the judge that he observed that the NBC and its MD were not in court, emphasising that by judicial authorities, they are required to be in court throughout the proceedings. He asked the court to emphasize to NBC and Mr Seguin’s counsel need to have their clients in court.

In response, Mr Seguin’s counsel argued that his client would be in court at the appropriate time and that his presence was not required when he is challenging the court’s jurisdiction.

But Justice Allagoa pointed out to Mr Opasanya that his client should always be in court even when he is challenging the court’s jurisdiction and Mr Opasanya later apologized for his client’s absence.

On his part, Mr Mordi apologised for his client’s absence, stating that his client was not served with the relevant court forms for the contempt proceedings.

The contempt proceeding is an offshoot of a claim filed by Rite Foods alleging passing-off by NBC of its Fearless energy drinks.

In the claim, which is before Justice Aneke, Rite Foods obtained interim injunctions against NBC to stop NBC from advertising or promoting its Predator energy drink in a manner that is capable of infringing on its Fearless energy drink.

Rite Foods alleged that NBC has disobeyed the interim injunctions. By the contempt proceedings, Rite Foods is seeking orders committing NBC’s managing director to prison until NBC obeys the injunctions.

It will be recalled that the passing-off contention came to light sometime in March, in Form 48, and in Suit No: PHC/L/CS/92/2021, at the Federal High Court, Lagos, published on Friday, March 19, 2021, in ThisDay and Guardian Newspapers, where Rite Foods alleged that NBC has infringed on its trademark with its Predator energy drink, which has adopted a lion insignia in resemblance of the mark on its Rite Foods’ Fearless energy drinks brand, which has been using and trading with the lion imagery three years before the NBC’s Predator came into the market.

The report also contained a notice of consequences of disobedience of court order issued to NBC’s MD, Mathieu Seguin, and an ex parte order restraining the company from promoting or using any sales promotion material for its Predator energy drink in a manner that infringes or passes off or that is capable of infringing or passing off the plaintiff’s Fearless energy drink until the interlocutory application for an injunction is determined.

It is the contention of Rite Foods Ltd, the makers of Fearless energy drink that its product, Fearless trademark is being passed-off by Predator, a product of NBC.

How to Redeem Gift Cards, Gift Card Rates in Nigeria 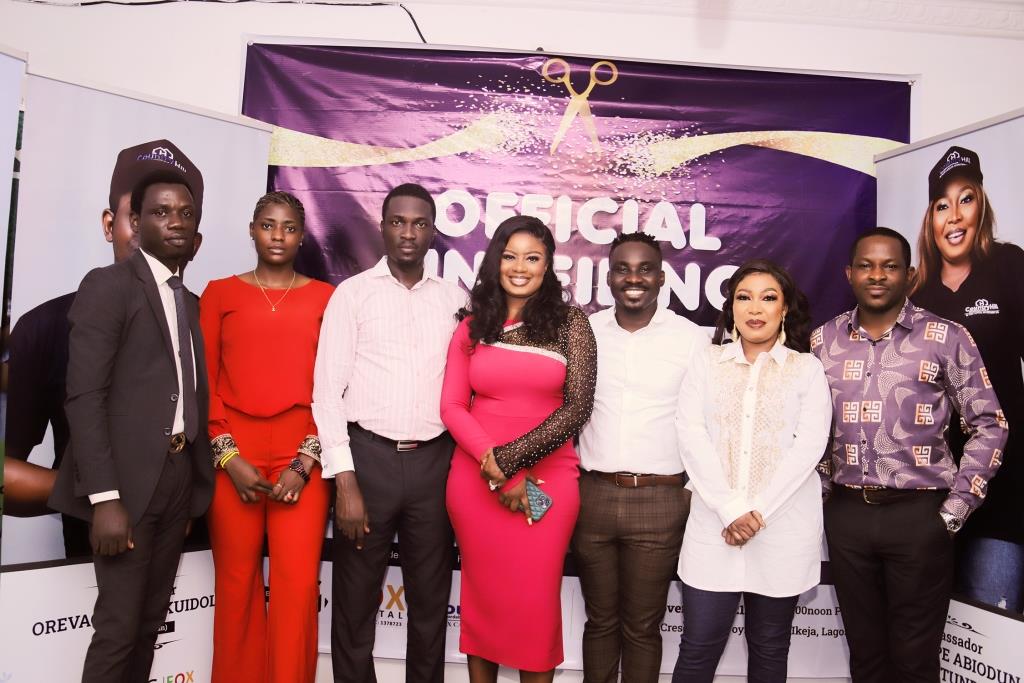 Four personalities in the entertainment industry in Nigeria have been hired by a real estate company, Country Hill Affordable Homes, to deepen its market in the country.

The four celebs were signed by the subsidiary of Fox Capital Investment Limited as brand ambassadors and would be expected to use their various wide platforms to promote the products of the organisation.

The Managing Director of Country Hill, Mr Adewale Oshinaike, explained that the four persons were hired to commemorate the fifth anniversary of the firm and to further reinstate its commitment to providing affordable homes to its prospective clients.

He pointed that Country Hill is one of the fast-growing real estate firms with a strong focus on providing affordable housing luxuries to all and leveraging the integrity and resilience in real estate practice has led the course of making housing and land property luxury acquisition available and affordable in the best interests of all stakeholders; customers, market and society.

Also speaking on the ambassadors signing, the company’s Executive Director in charge of Legal and Investment, Mr Emmanuel Bello, explained that it was part of efforts to project the company core values in the best possible image for media visibility and presence.

“We intend to have the right media presence and framework for our core value as a real estate company making real estate luxury available and affordable. With us at Country Hill Affordable Homes, having your own property or investment in real estate doesn’t require you to must be a millionaire,” he added.

According to the Executive Director, the ambassadors were carefully selected across entertainment genres as they fit into the brand project with their tremendous growth.

“A lot of synergies have been happening already between us and in the next one year of this endorsement deal, we want to grow with them in a symbiotic relationship as we grow our net worth together,” he added.

The ambassadors would be required to promote the real estate brand online and offline, go on-site tours, be available for clients’ land allocation, and be present at corporate events hosted by the company, the firm further said.

One of the newly signed brand ambassadors, Wasilat Coded, noted that Country Hill has come to stay with a strong mission statement in the industry.

She, however, promised to contribute to the success of the brand, urging prospective clients to minimize their fashion spending and invest more into real estate as it comes with a high rate of return of investment.

Forever, another brand ambassador, assured people of the safety of their money as they subscribe to a credible and reliable real estate firm whose plans for its clients are making landed property acquisition luxury available and affordable. 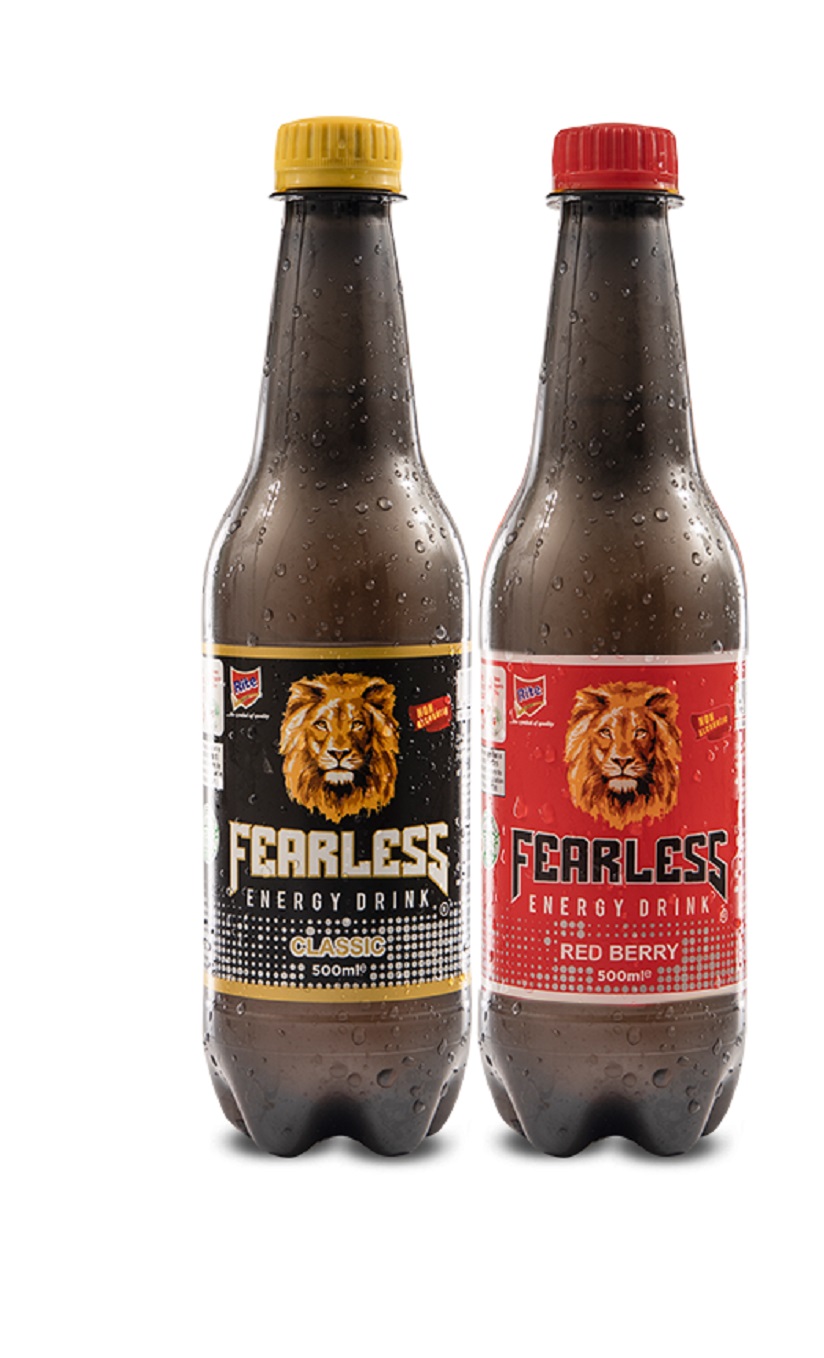 Over the weekend, the market leadership position of Fearless energy drink was validated at the 2021 Brandcom Awards held at D’ Podium International Event Centre, Lagos.

The event precisely took place on Friday, November 19, 2021, and it was to honour notable brands that have distinguished themselves in the period under review.

Fearless energy drink, manufactured by Rite Foods Limited, was adjudged as the Most Outstanding Energy Drink Brand of the Year.

According to the organisers, the brand clinched this coveted award because of its inventiveness and numerous contributions to the industry, as well as talent promotion, ideapreneurship, and societal development.

Eulogising the brand for its feat, the publisher of Brand Communicator, Mr Joshua Ajayi, said the Fearless energy drink brand truly deserves the award because of its leading position in its segment through sponsorship of laudable initiatives that have impacted the citizenry.

He added that the award was bestowed on the brand after a painstaking evaluation of the energy drink category and was pinpointed as the number one in terms of uniqueness, innovation, satisfaction, and the positive energy it offers.

In her remarks, the Brand Manager of Rite Foods, Ms Boluwatife Adedugbe, avowed that the award attests to the high quality of the Fearless Classic and Fearless Red Berry brands which are produced with state-of-the-art infrastructure and up-to-the-minute technology in a world-class factory.

She commended the convener of the Brandcom Awards for the recognition accorded the Fearless energy drink brand after a thorough assessment of its leading market status.

According to Ms Adedugbe, the brand will continuously connect with its consumers spread across the country through credible platforms that resonate with its values of positive energy, courage, leadership, and can-do spirit.

Business Post recalled that the Fearless energy drink made an entrance into the Nigerian market in 2017 with the Classic and Red Berry product variants.

Since then, it has continued to blaze the trail in its segment with the first-ever packaged polyethylene terephthalate (PET) bottle packaging and has been the standard for the industry.

The brand has embarked on initiatives that have helped in promoting Nigeria’s entertainment industry through sponsorship, thereby adding aiding talent discovery and fulfilment of musical careers by young artists by sponsoring 2021 Felabration and others. 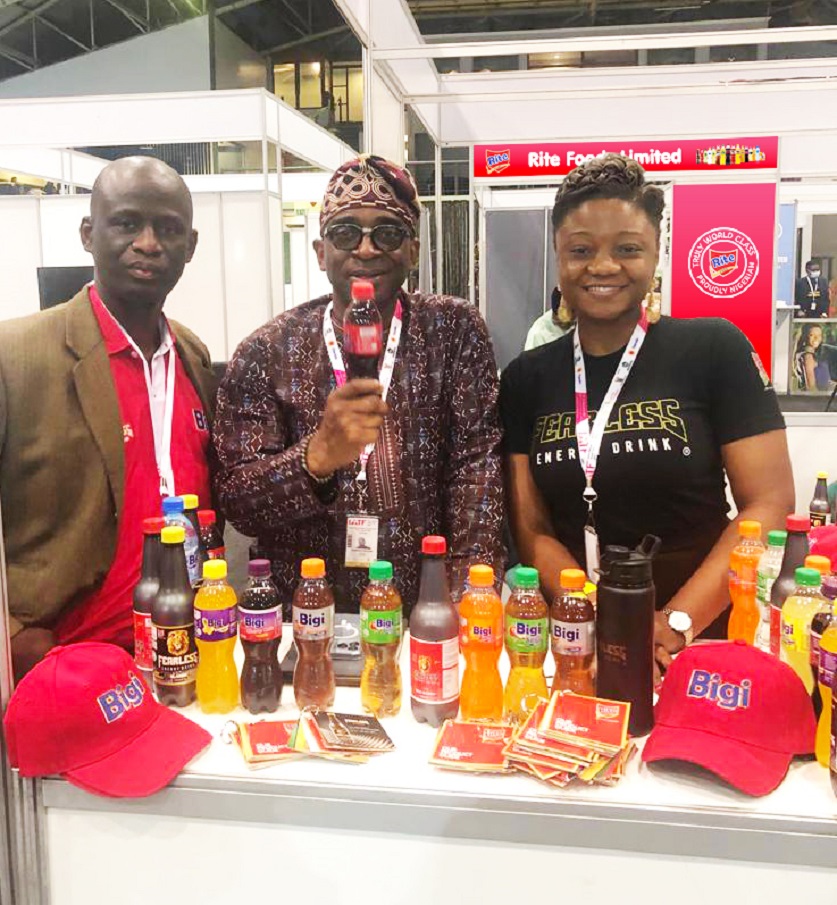 After conquering the food and beverage market in Nigeria, Rite Foods Limited is taking huge steps to spread its tentacles across the African continent and to achieve this, it is participating in the 2021 Intra-African Trade Fair (IATF) in Durban, South Africa.

At the one-week event, which started on November 15 and will end on November 21, Rite Foods is showcasing its products to guests from across the continents.

The IATF provides a platform for sharing trade, investment, and market information, enabling buyers, sellers, investors, and countries to meet and discuss business deals within the African continent.

It also offers an opportunity for exhibitors to showcase their goods and services, engage in Business-to-Business (B2B) as well as Business-to-Government (B2G) transactions within the African market of over 1.2 billion people, with a gross domestic product (GDP) of over $2.5 trillion created under the African Continental Free Trade Area (AfCFTA).

Whilst there, the West African fast-growing Rite Foods with its 12 Bigi carbonated soft drink variants, Bigi Table Water, premium Fearless energy drink, and Sausages, will take the bull by the horn and ensure it uses the IATF platform to boost its intra-African trade and investment, alongside maximizing the opportunity in discovering new customers and partners to broaden its network in its journey towards building enviable brand equity.

At the event, they will be engaged in trade diplomacy with select African trade ambassadors as well as leading trade partners across the continent, with the hope of engendering the growth of the top-quality brand which has become a major attraction in its category across the African continent.

The team will also meet with worthy distributors across Africa with the hope of deepening penetration within the continent, taking the company’s products that have been the hallmark of distinctiveness to consumers in other emerging and developed markets.

Speaking on the IATF participation, Ms Adedugbe stated that Rite Foods with unique brands in its product portfolio is poised towards extending its brand-building equity to other frontiers across Africa and to ensure that consumers get refreshed with the uniqueness attached to our premium brands.

She affirmed that the consumer-centric company with its symbol of quality and inventiveness in its product delivery through up-to-the-minute technology and state-of-the-art infrastructure will continue to participate at international fora for advancement in its business operation in line with global best practices.

In the same vein, Mr Yunus said the IATF will help galvanize the company’s investment strategy towards connecting its brands with consumers through robust business relations with trade partners within the continent and beyond.