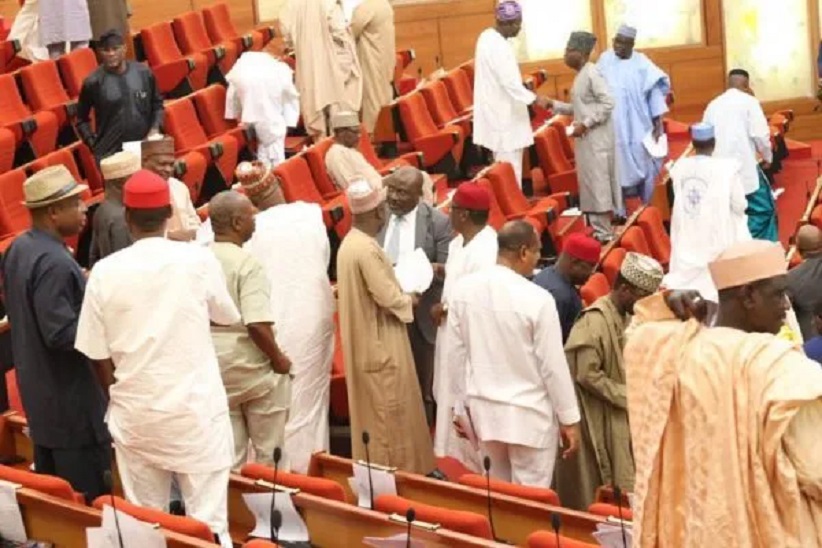 The Senate was thrown into a rowdy session on Wednesday when lawmakers began a debate on the motion on the Naira redesign policy of the Central Bank of Nigeria (CBN).

The motion, moved by the Chairman of the Senate Committee on Banking, Insurance, and other Financial Institutions, Mr Uba Sani, urged the Senate to provide legislative support for the policy.

He also wants the red chamber to mandate his committee to embark on aggressive oversight on the matter.

Mr Sani also urged the Senate to support the CBN design policy, including the January 31 deadline for compliance.

However, things took a turn when a host led by Senators Ali Ndume, Abiodun Olujimi, Betty Apiafi, Barau Jibrin, Chukwuka Utazi, and Orji Uzor Kalu supported the CBN policy but suggested the extension of the deadline for compliance.

Mr Kalu specifically wanted the Senate to invite the Governor of the CBN, Mr Godwin Emefiele, to throw more light on the policy, while he should be persuaded to extend the deadline to April 30, 2023.

But Senator Gabriel Suswan disagreed with Mr Kalu and others, claiming that the CBN Governor has always shunned the Senate invitations.

He urged his colleagues to ignore the CBN policy and let the country damn the consequences.

Senator Bassey Akpan stressed the need to support the CBN Governor, adding that there should be no discussion on the matter.

Senators Suswan and Akpan’s submissions did not go down well with those seeking an extension of the deadline, and the chamber turned rowdy.

It took the persistent appeals by the presiding officer, Deputy Senate President Ovie Omo-Agege, to maintain normalcy after 10 minutes of hot arguments among the senators.

Mr Omo-Agege said it was the prerogative of the CBN to redesign the Naira and put a deadline for compliance.

It also mandated the Senate Committee on Banking and Financial Institutions to go on oversight.

Mr Ndume had said there are only five banks in the 27 local government areas of Borno State since the insurgency started in the state.

Mr Olujimi also said the one and a half months timeframe was too short of withdrawing all the money in circulation to avoid shutting down the economy.

Mrs Apiafi said the Senate should invite the CBN Governor for further explanation on the issue, adding that rural banking had been shut down hence the January deadline should be extended.

She said counterfeiting wasn’t enough to change the fate of the Naira.

She said the implications of the redesign should be critically examined in view of the fact that bandits have said they would be collecting ransom in foreign currencies.

Mr Jibrin said the Naira redesign cannot halt terrorism but could only reduce it.

Mr Utazi said because of the rural nature of the country, the leadership of the Senate should interface with the CBN Governor to explain the implications of the peculiarity of the country, adding that the CBN should visit all the rural communities to get first-hand information.

Mr Kalu suggested the extension of the deadline from January 31 to April 31. The Committee on Banking and Finance should meet with the CBN Governor on the matter.

After all and sundry, the lawmakers offered to provide legislative support for the policy.