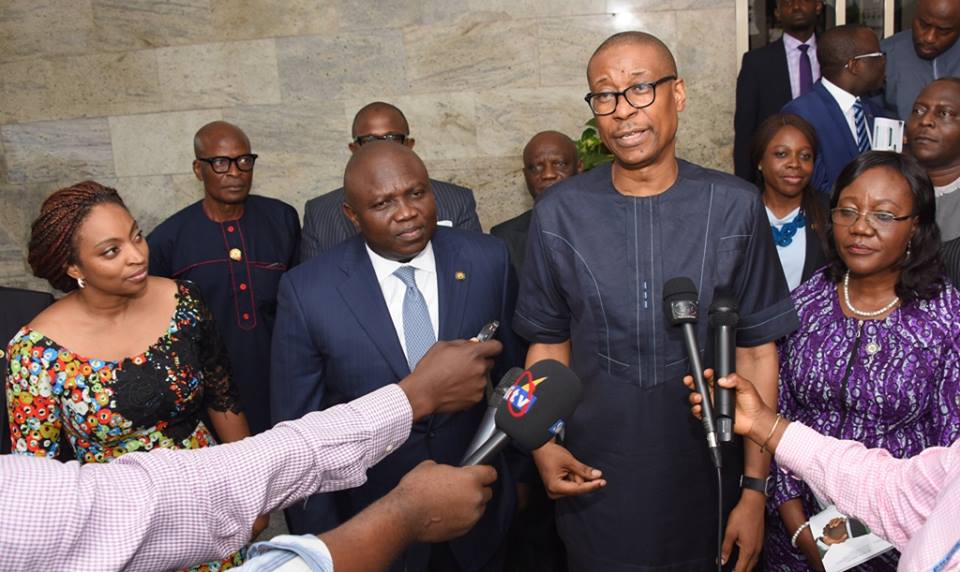 Federal Government on Thursday described Lagos State as a true model of the vision of improving on the ease of doing business and turning Nigeria into one of the easiest and most attractive places for investors in the world.

Minister of Industry, Trade and Investment, Dr Okechukwu Enelamah, who stated this in Lagos after a meeting with Governor Akinwunmi Ambode, said the state, as the commercial capital of the country, stands in a vantage position to drive the goal of government to improve World Bank ranking of Nigeria on the ease of doing business.

Speaking with Government House correspondents after the meeting, Mr Enelemah said both the Federal Government and the State Government were willing to collaborate on strategic areas to achieve the overall goal of growing the economy.

He said, “We basically have been talking about creating enabling environment for investments and ease of doing business and the area where we have strong convergence between Lagos State and the Federal Government.

“Governor Ambode and I have been discussing how to collaborate very strongly to make Lagos State a true role model in line with our vision of making Nigeria one of the easiest and most attractive places to do business and you will agree with me that there is no better place to start than Lagos State, particularly when you have a Governor who is committed to it and as he puts it to us, it is like preaching to the converted.

“So, what we have done today is to agree on modalities on working together to achieve the targets that we have set for ourselves both in ease of doing business ranking of the World Bank, in terms of some of the areas where we know that we should improve upon like tourism for instance, by making sure that people who want to visit Nigeria come in seamlessly; in terms of making it easy for people in Lagos State who are, as the Governor puts it, paying the taxes by making life easier and better for them.”

Giving details, the Minister said his office would be collaborating with the Office of Transformation under the Governor’s office, as well as the Presidential Enabling Business Environment Council, to achieve the overall objectives.

He also assured that the Federal Government would not hesitate to impose import restrictions where necessary to avoid Nigeria from being a dumping ground, while concerted efforts would be put in place to check negative trade practices, especially for the benefit of the Small and Medium Enterprises (SMEs).

Also speaking, Governor Ambode recalled that in the last few months, the State Government had been engaging the business community on ease of doing business, saying that the meeting with officials of the Federal Government was in sync with the vision of his administration to achieve the very best in driving investment.

“What has been happening in the last two years is that on our part, we have tried as much as possible to provide an enabling environment for businesses to thrive in Lagos but again the indices that indicate that we are improving on ease of doing business is not really looking too good and we believe strongly that if 70 per cent of businesses or these indicators are actually coming from Lagos State, there is a need for us to quickly create a convergence between the efforts of the Federal Government and the State Government to make sure that we improve the business environment and that is what we have been discussing in the last few weeks as well as today.

“Moving forward, we have also engaged the office of the Vice President to see that there is a convergence in all our efforts to make sure that if possible, people should come to Lagos and start their business the same day.

“We want a situation whereby construction permit is given to people within the shortest possible time; we want to ensure that people who pay their taxes actually have the benefit of what they are paying for and in doing that, if we get in right in Lagos, it is very clear that Nigeria has gotten it right and that is why we are meeting,” Governor Ambode said.

The Governor expressed optimism that the current efforts would bring about major improvements on the business environment, adding that such would go a long way in growing the Gross Domestic Product (GDP) of Nigeria.