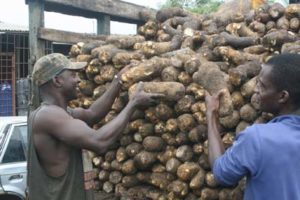 The first container of yams from Nigeria has finally landed in the United State of America, Business Post has learned.

This was achieved some days ago, according to the Minister of Agriculture and Rural Development, Mr Audu Ogbeh.

As we speak, another container of yams is billed to leave shores of the country for the United Kingdom very soon.

Mr Ogbeh, at an event over the weekend in Abuja, stated that his Ministry had taken various measures to address the issue of rejection of Nigeria’s agricultural produce by the European Union (EU) as a result of high level of pesticide with the setting up of an inter-ministerial committee on zero reject in ensuring certification, standardization and quality control of the country’s agro produce for local consumption and for export which had hitherto been a challenge.

“If Nigeria’s yams can enter foreign market, we need to double our efforts to get tractors to make heaps”, the Minister said.

On the issue of incessant clashes between farmers and herdsmen in the country, Mr Ogbeh said about 3,000 Agro Rangers were being trained by the Civil Defence Corps to protect farms while lands were also being acquired in some states of the federation to create cattle colonies.

He said about 10,000 extension workers were also being trained under the N-power programme of the Federal Government to cater for the needs of Nigerian farmers.

Mr Ogbeh disclosed that there is a budgetary provision in the year 2017 for the building of dams and lakes in order to have an all year round planting season and harvests and stated that the ministry has not endorsed the genetically modified organisms (GMO) but instead the ministry is adopting the use of hybrid seeds.

The Minister urged state governments to give more support to the development of agricultural sector and asked the team of social media influencers to pass the message of hope across to the public.

container of yamsyams for export