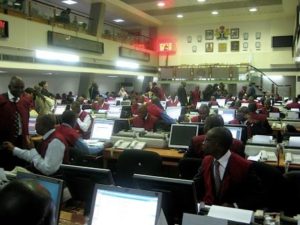 The Nigerian Stock Exchange (NSE) opened the week on Monday, January 16, 2017, on a bullish note with the major market indices ending green.

This was against what was posted on the last trading day on Friday when the market closed in negative territory.

The all-share index closed today at 26,373.83 points after advancing by 47.9 points or 0.18 percent, while the market capitalisation finished at N9.07 trillion after increasing by N16.5 billion.

The volume of shares bought and sold by investors on the NSE on Monday went higher by 25.4 million.

The chart showed that a total of 174 million shares were traded by investors valued at N1.175 billion, which were executed in 3,075 deals.

A further breakdown, according to Business Post correspondent, indicated that Diamond Bank emerged the most traded equity in terms of volume, accounting for 38.7 million units exchanged at N44.9 million.

Our correspondent further reports that 17 stocks appreciated at the close of trading activities on Monday compared with 15 equities that crashed.