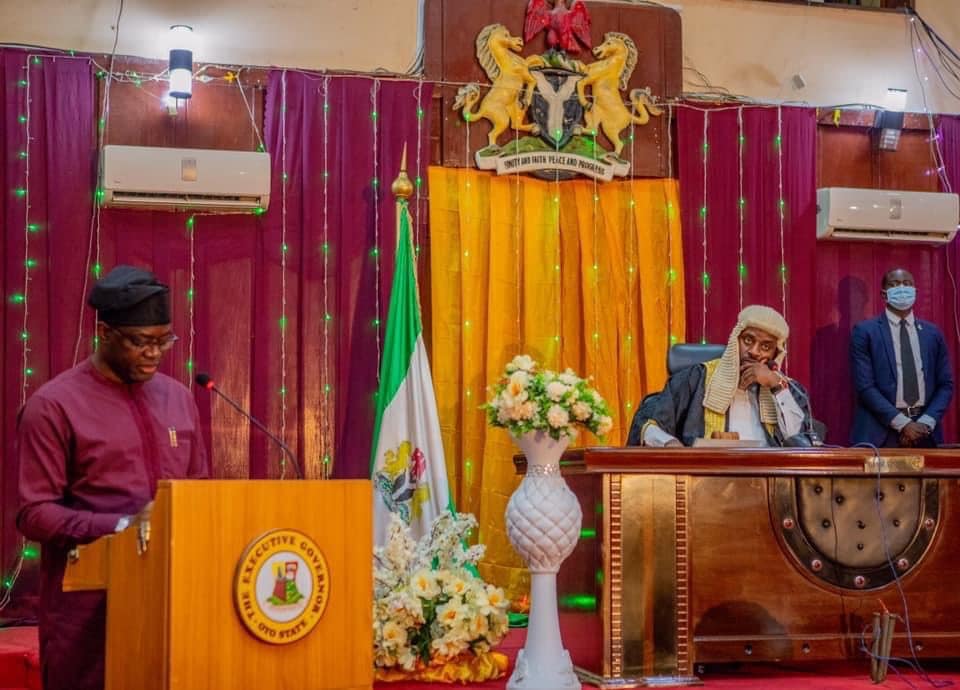 On Wednesday, September 29, 2021, the Oyo State Governor, Mr Seyi Makinde, submitted the budget proposal for the 2022 fiscal year to the state’s House of Assembly in Ibadan, the state capital.

While presenting the document to the lawmakers, the Governor said his administration plans to spend a total of N294.5 billion in the financial year.

According to him, the N294.5 billion budget represents an 18.3 per cent reduction over the amended 2021 budget, noting that the capital expenditure stands at N156 billion, representing 52.97 per cent, while recurrent expenditure takes N138.5 billion, amounting to 47.03 per cent.

He said the budget, christened Budget of growth and opportunities, was put in place to move the state from poverty to prosperity, noting that funds for the 2022 budget would be sourced from internally generated revenue, statutory allocations, and capital receipts.

He said the state looks to generate N79.8 billion as IGR in the year, adding that though the projection was a tall order, his administration plans to achieve it without increasing tax.

However, he disclosed that the state intends to inject the sum of N156 billion into the economy through investments in infrastructure and by ensuring that “our people have higher purchasing power.”

“For the first time, our proposed capital expenditure at 52.97 per cent is more than our recurrent expenditure. A major project we will be carrying out in 2022 is 110km Ibadan Circular Road. This tolled road will be a major economic boost as it will create an alternate entry and exit point out of Ibadan and connect the new economic corridor and business district, we are building at Moniya,” he added.

He further disclosed that the health sector is to get the sum of N17.4 billion, amounting to 5.9 per cent, while agriculture will get N11.3 billion, representing 3.84 per cent.

He told the lawmakers that his administration last year promised to continue to invest in infrastructure, adding that such investments were not only evenly distributed, they also cut across the thematic aspects of his administration spanning the four-point service agenda.

“We have worked hard to ensure that infrastructural development is not restricted to just one zone of the state. In education, we have continued to make investments at all levels. At the primary level, we completed 26 model schools across all zones in Oyo State, built 57 classrooms, installed boreholes, and improved the sanitary condition of existing schools through the construction of toilets.

“We have also continued to improve the quality of education in Oyo State. We not only recruited teachers as reported, but we have also trained them on best practices. More recently we completed the recruitment of 692 education officers in the state,” he said.

“On Security, we have made provision to recruit more Amotekun Corps members and we will continue to make an investment in technology that supports our security architecture in Oyo State,” the Governor stated.

However, Governor Makinde admitted that, “There is still so much more that needs to be done. We are aware of the complaints of our people regarding roads in Oyo State.”

“We are determined to meet their yearnings for high-quality infrastructure in the state and that is why we continually embark on road rehabilitation and reconstruction. In the immediate, we are carrying out palliative works on these roads,” he assured.

While giving details of the performance of the 2021 budget, Mr Makinde said that budget performance had reached 60 per cent despite the fact that there are three more months to the end of the fiscal year, expressing hopes of raising the performance to 75 per cent.

In his remarks, the Speaker of the Oyo State House of Assembly, Mr Adebo Ogundoyin, said that the presentation of the 2022 budget will spur lawmakers to redouble their efforts in terms of oversight functions and project monitoring.

According to him, the timely presentation of the 2022 budget will also ensure that the legislature completes work on it well before the end of the 2021 fiscal year. He added that the development would help the state keep to the January to December Budget circle.

“Let me state categorically that the budget proposal is not new to us because we have been part of the process at all levels. We are equally convinced that the governor has articulated all the requests and demands of our people based on the outcome of the stakeholders’ consultative meetings on the 2022 budget, held across the State.

“Expectedly, the four cardinal pillars upon which this administration places its development agenda, viz: Education, Health, Economy (driven by Agribusiness), and Security are steadily being pursued and realised,” he said.

The Speaker commended the Governor for working to grow the IGR of the state, adding that the assembly would do everything possible to ensure the checks and balances crucial for achieving a transparent, accountable, and prudent government.

He also requested that the governor assents to the Legislative Fund Management Law which has been passed by the assembly, adding that states that have assented to the law include Adamawa, Sokoto, Zamfara, Plateau, Delta, Ekiti, and Ondo.

“Once it is assented to by you, we will be able to implement Consolidated Legislative Salary Structure (CONLESS) which is a uniform salary structure for all the State Houses of Assembly,” the Speaker said, adding that some states of the federation are already implementing the consolidated legislative salary structure.

“States like Rivers, Kaduna, Nasarawa, Plateau, Sokoto, Bayelsa, Delta, Adamawa, and Lagos are already paying their Legislative staff using CONLESS salary structure. In Oyo State, the Judiciary workers have also been enjoying their Consolidated Judiciary Salary Structure (CONJUSS). We do not want to be an exception,” he appealed.