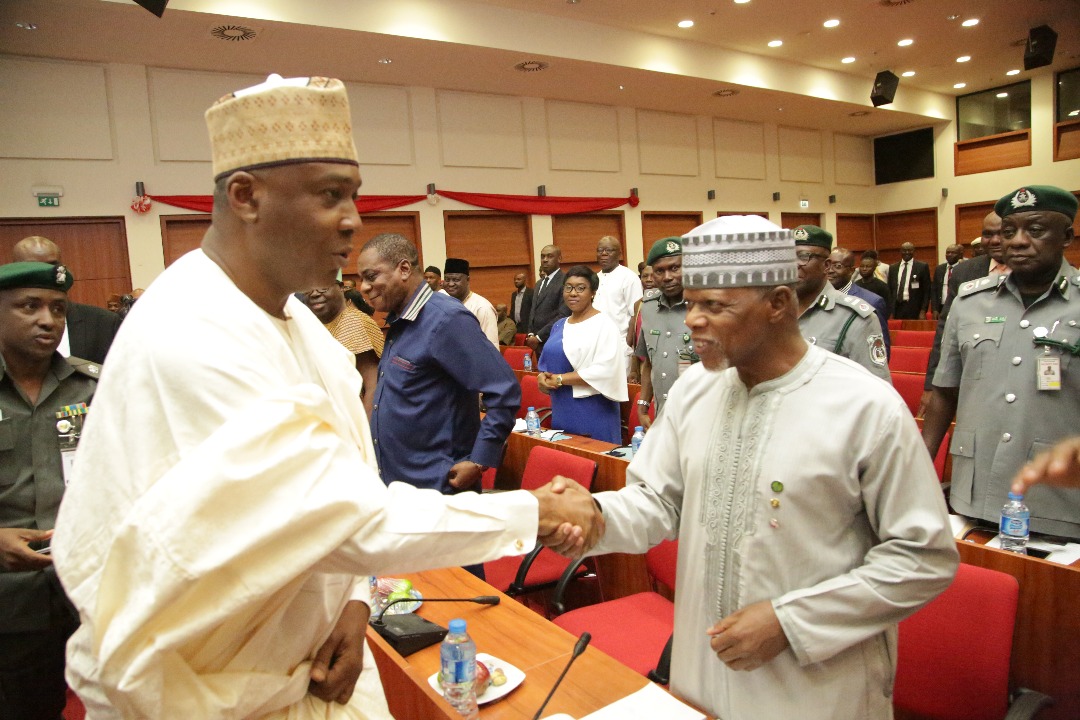 Smuggling of goods into the country has been identified by the Senate President, Mr Bukola Saraki, as the greatest threat to the realization of the economic policies of the administration of President Muhammadu Buhari.

While declaring open on Monday a public hearing on tackling smuggling in the country organized by the Senate Committee on Customs, Excise and Tariffs at the National Assembly, Abuja, the number three citizen of Nigeria stressed that unless the monster of smuggling was tamed, efforts being made to diversify the economy from oil would not yield expected results.

In a statement issued by his Chief Press Secretary, Sanni Onogu, the Senate President called on the Committee and all the stakeholders present at the hearing to come up with relevant recommendations on the way forward to save the nation’s farmers, small scale industries and financial institutions from impending crisis.

“My personal presence here this morning along with the leader of the Senate is to make a point of the importance that this senate places on this subject matter,” Mr Saraki said.

The singular greatest threat to the delivery of the promises made by President Muhammadu Buhari on the diversification of the economy is this issue of smuggling.

“The level of smuggling that we are seeing cannot continue because they will definitely rubbish all the policies of government if allowed to go on. I am saying that with all sincerity and all level of responsibility and I tell you why. Today, the greatest threat to small holder farmers is smuggling.

“Today, rice farmers who have gone to take loans either from the CBN (Central Bank of Nigeria) or from commercial banks are being threatened by rice coming in from across the borders at highly subsidized rate.

“The meaning of that is that the imported rice will always be cheaper than those produced by our local farmers.

“A time will come, if we do not do anything that these farmers will not be able to pay their loans to the banks and this will result in serious crisis.

“The banks that have given loans to these farmers, will also have crisis in their hands. And for the central bank that has intervened with billions of Naira again will not be able to recoup their money.

“The processors who have invested in rice mills at the beginning of this administration will also be threatened if we do not address the issue of rice smuggling,” he said.

Mr Saraki also stated that if smuggling is not stopped, the over $7billion invested by the government in the last 10 years to stimulate local production will go to waste.

“As a country we have invested over $7billion over the last 10 years in stimulating local production,” Saraki said. “If we do not address the area of smuggling, this investment will go to waste. This is the severity of the issue before us today.

“Any institution, whether it is the National Assembly or any other one, in order to support the success of our President, we must join to stop smuggling, without it, we should just forget the issue of diversification or increased agricultural production.

“We will only pay lip service to issue of agricultural production if we do not address the issue of smuggling and that is why I made it a point to come here personally to drive this message.

“I am confident that with the caliber of members of this Committee and the stakeholders here, that we will use this opportunity to come out with robust solutions on the way forward”, the Senate President.

He insisted that smugglers must be stopped to prevent them from further sabotaging the economy.

“There is no government, any serious government, that will render itself helpless because we must know the individuals who are doing this smuggling. We must be able to know who they are. Is it that they are larger and bigger than government?

“We must be able to sanction officers who are responsible for this and we must be able to reward officers who prevent the issue of smuggling. We want this Committee to sit down for the length of days of public hearing and ask ourselves what is the way forward. I can assure you that our responsibility as a Senate is to ensure that whatever recommendations are made by this Committee we have to send them back to the executive because as I said this matter is the singular greatest threat to our economy and to this government”, he said.

The Senate President noted that while Nigeria must continue to respect international treaties, it cannot afford to do so at the detriment of its economy.

“There are other issues, of course, that have to do with the ECOWAS treaties and agreements,” Saraki said. “Yes, we are part of ECOWAS. Yes, we want to develop ECOWAS, but no serious country will allow anything that will ruin its economy at the benefit of its neighbouring countries.

“We must be able to do what is right. So on this note, all hands must be on deck to ensure that we address this problem squarely. I assure you of the greatest support of this Senate,” Mr Saraki said at the hearing.

He urged the Comptroller General of Customs, Colonel Hamid Ali to prove his mettle by stopping the incidence of smuggling across the nation’s borders.

“To the Comptroller General of Customs, let me say on a lighter note, that once you end smuggling, even if you want to wear jeans and T-Shirt, I will move the motion that you should wear jeans and T-Shirt,” Saraki said. “But on a serious note, this issue is very important. Let us all work towards ending this menace once and for all.”

Earlier, Chairman of the Senate Committee on Customs, Excise and Tariffs, Mr Hope Uzodinma, said the public hearing was part of the committee’s holistic investigation into the operations of the Comprehensive Import Supervision Scheme (CISS) with a view to identify the factors responsible for increasing rate of smuggling of goods into the country.

He said that the exercise was also aimed at proffering solutions to the menace of smuggling and recommend appropriate penalties to be visited on perpetrators.