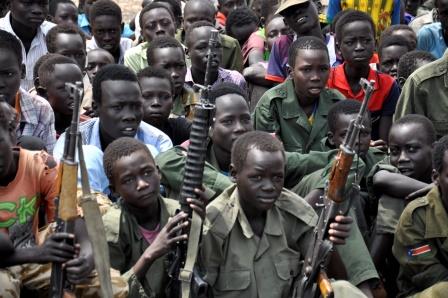 The International Monetary Fund (IMF) says the annual inflation rate of South Sudan rose to about 550 percent in September 2016 before declining to 370 percent in January 2017.

On March 15, 2017, the Executive Board of the world body concluded the Article IV consultation with the youngest country in the world.

The IMF affirmed that South Sudan faces enormous economic and humanitarian challenges in the aftermath of internal conflict and external shocks.

It noted that the relapse into violence a few months after forming a transitional government of national unity in April 2016 compounded the humanitarian crisis and derailed the peace process, observing that the conflict has contributed to the deaths of thousands and led to severe food insecurity for nearly half of the population, as well as a substantial flight of refugees to neighbouring countries.

It pointed out that economic conditions have deteriorated rapidly since the beginning of the civil conflict in late 2013, adding that real GDP growth declined by nearly 20 percent in the two years through 2015/16.

The IMF said conflict and the collapse of oil prices led to a decline in oil production and export proceeds, stressing that falling government revenue and rising security-related spending caused the fiscal deficit to rise rapidly, which exacerbated the economic instability.

Monetization of the fiscal deficit led to strong money growth, high inflation and precipitous exchange rate depreciation. Since December 2015, the South Sudanese pound has lost more than 95 percent of its value against the US Dollar, it said.

The IMF said authorities shifted economic policy course in late 2016 with the passing of a new budget for 2016/17, which incorporates bold fiscal measures that could go a long way to restore macroeconomic stability and strengthen public financial management.

Preliminary information indicates a substantial reduction in the fiscal deficit for the first half of the fiscal year and significant moderation in money growth, the global financial institution said.

The medium-term outlook faces challenges and significant downside risks. Without significant progress toward peace and economic stabilization, the economic trajectory for South Sudan is highly unstable, and the country risks falling into a spiraling trap of deteriorating economic performance and worsening security conditions with continued high humanitarian costs, it noted, adding that a sustainable medium-term outlook is predicated on achieving progress on normalization of the political and security situation, sustained economic adjustment and reforms, and renewed access to external financing.

It observed that assuming that peace was achieved, the fiscal deficit could fall to 2–3 percent of GDP in the coming years consistent with a return to single digit inflation and exchange rate stability. In the next five years, annual GDP growth could increase to 5-6 percent, reflecting a recovery in oil production and in non-oil GDP.

Related Topics:Inflation Drops to 370%South Sudan
Up Next

Shell to Begin 2008 Bodo Oil Spills Clean Up in April