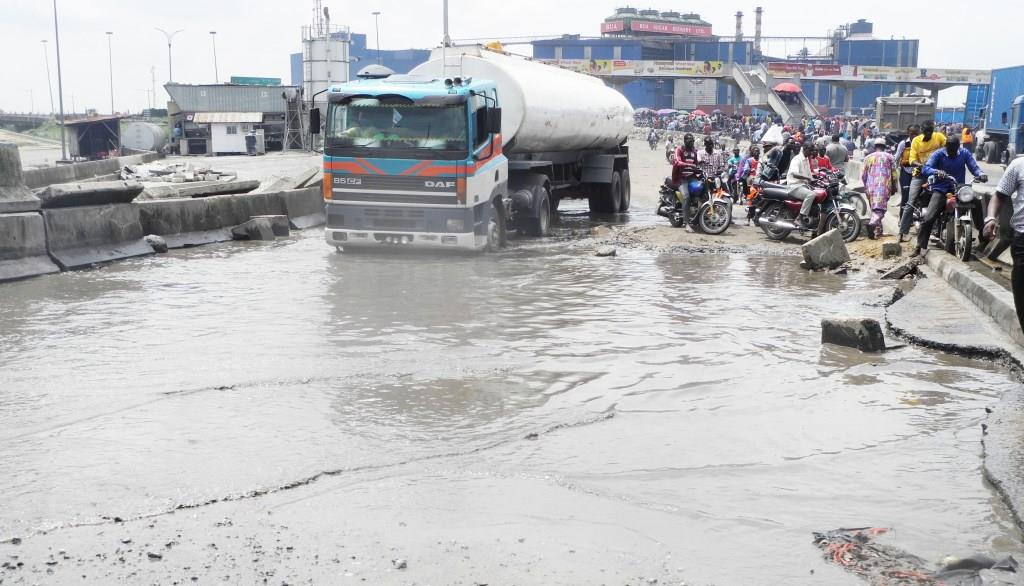 Governor Akinwunmi Ambode of Lagos State has approved the restriction of trucks entering the metropolis as a way of dealing with the incessant traffic logjams experienced at the Apapa axis of the state.

At a press conference jointly addressed on Friday by officials of the state as well as members of the Association of Maritime Truck Owners (AMATO) at the Bagauda Kaltho Press Centre in Alausa, the state government specifically said owners and operators of articulated vehicles/trailers and petroleum tankers should stay away from Lagos for now.

It regretted that the incessant traffic bottleneck had impacted negatively on the commercial activities of the citizenry, adding that the directive would be enforced to eliminate the current hardship being faced by motorists.

Addressing the briefing, Acting Commissioner for Transportation, Mr Olanrewaju Elegushi, said investigations revealed that the traffic lockdown was a direct result of the challenges being faced by operators of the ports’ which had made it impossible for them to load the articulated vehicles/trailers that has come from the hinterland to evacuate imported items from the ports.

He said the gridlock was worsened by the current rehabilitation of some major roads and other minor roads which necessitated the closure of some roads in Apapa, noting that the situation had led to the traffic bottleneck and backflow of the articulated vehicles to as far as Ojuelegba on the Funsho Williams Avenue, Surulere.

Explaining the reason for the directive, Commissioner for Information and Strategy, Mr Steve Ayorinde, said the Apapa gridlock had also become a reoccurring problem due to constant breakdown of operations at the Ports.

“Clearly, it is the breakdown of operations at the Port that is the monster causing this reoccurring issue. We keep having this issue of gridlock in Apapa because issues that the Ports Authorities and the concessionaires are dealing with are recurrent and the spill over effect of those issues are causing all these.

“If the Ports can’t determine how many trucks they are able to deal with on a daily basis; how they are informed about coming in and going out, then it will be a problem to deal with.

“What we need to do is to keep on engaging with them, we keep on engaging with other states and so on. I mean people who have trucks in other states and already know that there is a logjam in Lagos, why send other trucks to Lagos? While clearing the mess that the Lagos State Government did not cause, can people not consider it logical to wait for few days for us to clear this and this is the reason why we are saying that trucks should stay away from Lagos in the interim.

“The idea is not to say don’t come into Lagos. It is part of what makes the economy of Lagos what it is but we are saying let us deal with the logjam that we have presently and there is no way we can deal with it, we can only deal with the effect because the causes essentially have to do with the operations at the Ports and that is why we are appealing to them,” Mr Ayorinde explained.

He also said that the Nigeria National Petroleum Corporation (NNPC) had been unable to load product from its Mosimi Depot in Ogun State due to vandalisation, noting that tankers hoping to get fuel across to the South West States are stranded in Lagos.

In the interim, the government, however, urged the operators to utilise the Ogere Trailer Park and other parks outside the state to avoid further hardship for motorists on the road, assuring that all measures would be deployed to ensure quick resolution of the situation.

On his part, General Manager of the Lagos State Emergency Management Agency (LASEMA0, Mr Adesina Tiamiyu, said the state government has already instructed the agency alongside Rapid Response Squad (RRS) of the Nigeria Police and the Lagos State Traffic Management Authority (LASTMA) to enforce the order restricting trucks from entering Lagos for now, noting that the enforcement will subsist pending when the spill over of traffic is cleared.

He urged residents not to hesitate to immediately alert State authorities through the 112 and 767 toll free lines in the eventuality of any danger lurking.

Also speaking, President of AMATO, Mr Remi Ogungbemi said the present situation was worrisome as it is a time bomb waiting to explode if unchecked.

He urged the Federal Government to take a cue from the Lagos State government and collaborate to resolve the crisis as soon as possible.

While pledging the readiness of members of his association to support efforts geared to restore sanity, Mr Ogungbemi also called for a regulatory system in place to manage call-up of trucks through technology.

Recall that this week, the Lagos State House of Assembly appealed to the NNPC to relocate tank farms in Apapa to other less populated areas so as to ease hectic traffic situation in the area.