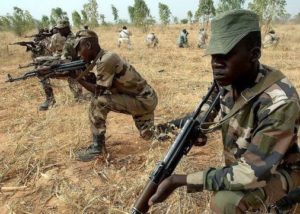 A fierce gun duel between Nigerian soldiers and members of Boko Haram has led to the death of 19 persons.

Spokesman of the Nigerian Army, Col Sani Usman, disclosed that a Lieutenant Colonel, Mr Muhammad Abu Ali, who led troops to the recapture of Baga town in Borno State from Boko Haram in February 2015, was among the gallant soldiers fell by the terrorists.

He said Mr Ali was killed alongside four other soldiers on Friday during an encounter with the insurgents.

“Unfortunately, we lost an officer and four soldiers, while four other soldiers sustained various degrees of injuries during the encounter. One of those killed in action, was Lieutenant Colonel Muhammad Abu Ali, the Commanding Officer of 272 Task Force Tank Battalion,” the Army spokesman said.

It would be recalled that the recapture of Baga from the terrorists’ group remains the one of the army’s fiercest-ever battles with Boko Haram. After the fight, Mr Ali was given an accelerated promotion for his gallant show.

He was promoted from the rank of Major to Lieutenant-Colonel in September 2015.