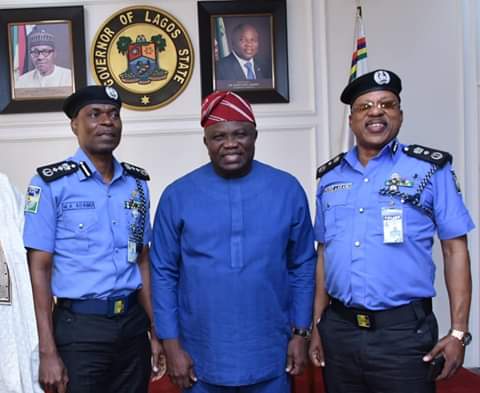 Inspector General of Police, Mr Adamu Mohammed, on Monday paid a courtesy visit to the Governor of Lagos State, Mr Akinwunmi Ambode, over recent cases of extra-judicial killings recorded in the state.

During the visit, the police chief promised that all the affected officers involved in the act would be charged to court and made to face the full wrath of the law.

Speaking at Lagos House in Alausa, Ikeja, Mr Mohammed, who was accompanied on the visit by top police officers, said the affected law enforcement agents have already been arrested and tried internally, but that they would also face criminal prosecution for such act, which according to him, was against ethics of the Force.

He said it was on record that police officers in the state have been performing creditably well, but that the activities of few unscrupulous ones were denting the good work of others.

“I came to pay a courtesy visit to the Governor because I am in Lagos State to see the officers and men of the Nigerian Police. I came to talk to them on good behaviour and to remind them of ethics of the job. We are to serve members of the public; we are not their masters, we are their servants.

“The officers and men in Lagos State have been doing a lot of good job in fighting crime and they have been succeeding but the acts of few officers out of many in Lagos State are denting the good works that others have done.

“Recently, we have had some overzealous officers who went out of their way in the course of performing their duties; they shot a lady and she died and we felt that that is not acceptable, it is unbecoming and I had to come down to talk to officers and men to remind them of their duties and to tell them that anybody that go out of his way to commit extra-judicial killing, such a person is on his own and he has to face the wrath of the law and in this particular case, the officers that were involved have been arrested; they have been tried in our internal way of dealing with such issue and at the same time, they would be charged to court,” Mr Mohammed told newsmen after the visit.

He also commended Governor Ambode for the massive support to police and other security agencies in the state, saying the successes recorded in keeping the State safe would not have been possible if not for the support of the Governor.

“I want to thank Governor Ambode for all his support to the members of the Nigerian Police in Lagos State. Without the support of the Governor, I think the successes we recorded in the state, would not have been possible.

“The Governor is the Chief Security Officer in the state and all his policies towards fighting crime have been implemented by the Nigeria Police Force and we felt this is the time to come and thank him,” Mr Mohammed said.

Responding, Governor Ambode commended the IG for taking it upon himself to promptly address the extra-judicial killings in the state personally, despite his responsibilities across the country, saying it shows responsiveness and seriousness with which the issue was being handled by the police chief.

“I want to commend the IG for this visit. Beyond the fact that this is a courtesy visit and like he has said, he is coming promptly to address the issue of extra-judicial killings that have actually taken place in the last few weeks.

“So, for the IG to come promptly himself to address issues that relate to public feelings about SARS and actually talking to the officers and men, that means he is taking the responsiveness within the Nigeria Police seriously before we start to address extra issues that border on the citizens. So, I like to commend him on that act of responsiveness and also say that it is what we should emulate in dealing with management issues that relate with our officers.

“I empathize with the IG because last week, he was in Zamfara; today he is in Lagos and tomorrow he would be in other places. policing Nigeria is a big challenge but again he is up to the task and we wish him well in his assignment,” Governor Ambode said.

He said with just 33,000 officers policing a population of about 24 million in Lagos, the police was already overstretched, but assured that the state government would continue to support the Police and other security agencies to ensure that they carry out their duties lawfully and also to have the human face needed to continue to uphold peace and unity in the country.

Besides, Governor Ambode commended police chiefs and officers in the State, saying it was on record that they have contributed to the massive improvement in making the State safe in the last four years.

“When we came in May 29, 2015, we had a tripod that we actually believed this government would work on – security, job creation and then infrastructural development. It is on record and I want to make it clear also that the Nigerian Police and other security agencies have actually contributed successfully to one of those tripod and you would have seen that there has been a lot of improvement in the security of lives and property in Lagos State in the last four years,” he said.

Related Topics:extra judicial killing
Up Next