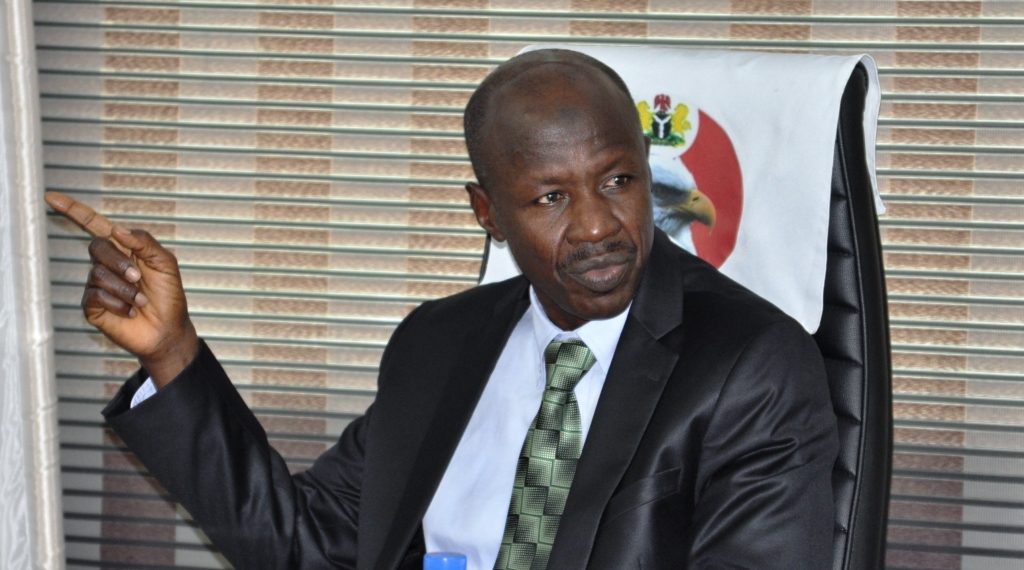 Magu’s Chief of Staff Not Under Investigation—EFCC

The management of the Economic and Financial Crimes Commission (EFCC) has reacted to a media report that Mr Ola Olukoyede, the Chief of Staff to Acting Chairman of the commission, Mr Ibrahim Magu, was under investigation for an alleged corruption.

The news report was published by online news platforms, First Weekly Magazine, and Nigerian News Direct with the caption ‘Magu’s Chief of Staff Under Investigation for Bribery and Unlawful Enrichment.’

The publications purported that Mr Olukoyede defrauded some prominent “Nigerians…under the guise of assisting (sic) to curry (sic) from his boss, Ibrahim Magu.”

It went on to list an unnamed former Niger State Governor and a prominent Chief from the southwest among his alleged victims. The latter, the publications claimed, lost N100 million to the Chief of Staff.

The reports further claimed that EFCC “discovered a mind-boggling amount of money” in the personal accounts of Mr Olukoyede, which supposedly forced the Vice President to order an internal probe, adding that the Chief of Staff was detained and thereafter placed on suspension.

In a rebuttal, the EFCC said the narrative and the issues raised were strange to it, pointing out that as far as the commission was concerned, Mr Ola Olukoyede is not under any investigation and could, therefore, not have been detained or suspended.

“The commission has no record of any petition by anybody calling into question the integrity of the Chief of Staff. So, stories about a former governor or a prominent south west chief accusing him of wrong doing are at best fictional,” the rebuttal said.

“Consequently, the Commission is inclined to dismiss these publications as the handiwork of mischief makers who are out to impugn the hard earned reputation of Mr Olukoyede for reasons that are not clear.

“The commission consequently enjoins members of the public to disregard the publication for what it is; fake news!” it said.