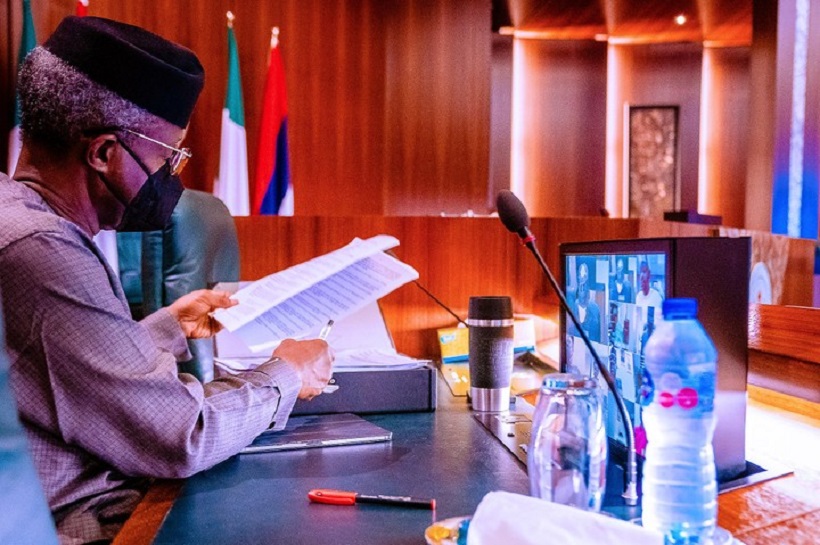 The Vice President, Professor Yemi Osinbajo, on Wednesday, presided over the 40th virtual meeting of the Federal Executive Council (FEC) at the State House in Abuja.

Before the commencement of the day’s proceedings, which was attended by some members virtually, the council observed a minute silence for former Ministers.

Officially announcing the passage of the two former ministers to the council, the Secretary to the Government of the Federation (SGF), Mr Boss Mustapha, recalled their various services to the country.

One of them was Mr Olabode Olowoporoku, who served as Senator representing Ekiti South Senatorial District at the Senate, was Minister of Science and Technology in the Second Republic. He died on Wednesday, March 24, 2021, at the age of 76 years.

Apart from Mr Mustapha, the Chief of Staff to the President, Professor Ibrahim Gambari was physically present at the meeting.

The Head of Service of the Federation, Mrs Folasade Yemi-Esan, and other Ministers participated in the weekly cabinet meeting from their various offices in Abuja.

It was the first time since the virtual FEC meeting started in 2020 that President Muhammadu Buhari is not presiding.

On Tuesday, he departed Nigeria for London, the United Kingdom, for a medical check-up. He is expected back into the country in two weeks’ time.

However, according to one of his media aides, Mr Garba Shehu, the President did not transmit his presidential powers to his vice, Mr Osinbajo.