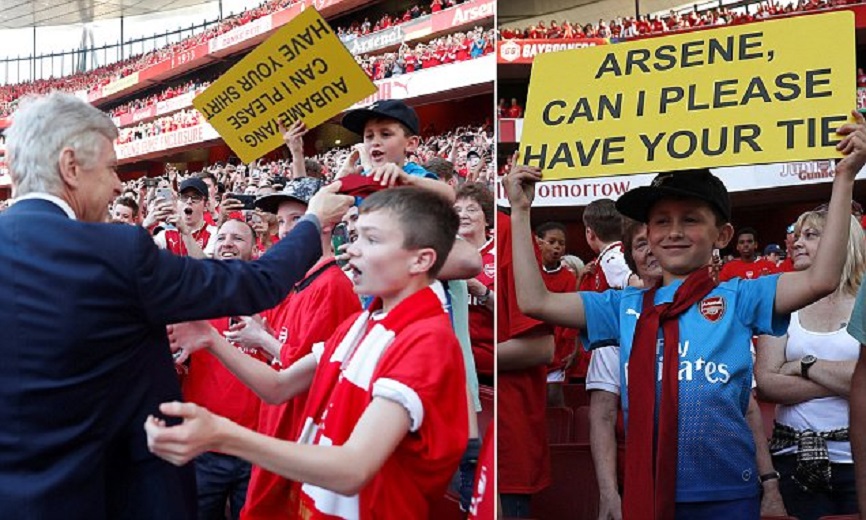 The father of the seven-year-old boy, Luca Iacurti, who received a tie from Arsene Wenger last Sunday after his last home match against Burnley at the Emirates Stadium, has rejected the £1,000 offered to him by an Arsenal FC fan for the piece of clothing.

The 39-year-old Rocco Iacurti from Hayling Island in Hampshire, who works as a fabrication manager in England, was with his son during the coach’s last game in charge of the club.

The lad had carried a placard with the inscription ‘Arsene, can I please have your tie?’ and while going round the stadium to appreciate the fans, Mr Wenger sighted the request and obliged by giving the tie to the boy.

Speaking with The Sun, Rocco said, “I have already had offers for the tie.

“Somebody said in jest to me: ‘I’ll give you a grand for it.’ But we aren’t doing that.

“We are not in it for the money. It’s a wonderful piece of history, an once-in-a-lifetime gift, and we are keeping it.

“I am going to get the tie framed up for Luca and hang it up on his bedroom wall.

“We made the sign up and hey presto it worked. The security guys were fine with us bringing it into the stadium.

“Wenger started to walk past as Luca stood up with the sign. We thought we had missed our chance but then Wenger looked up, gave us the nod, undid his shirt buttons and handed over the tie.

“It’s all very surreal but also a wonderful present.”

The family paid special thanks to Wenger on a trip to the beach on Bank Holiday Monday, by writing ‘Thank you, Arsene’ in the sand.

Rocco added: “Luca probably doesn’t appreciate the significance of what he has got but he was absolutely buzzing after the match. He has felt like a million pounds ever since.

“He wants to wear it for school this week but he’s not going to.”

He joined the club in 1996 and in the 2003-04 season, he famously guided Arsenal’s ‘Invincibles’ to a historic unbeaten league campaign.