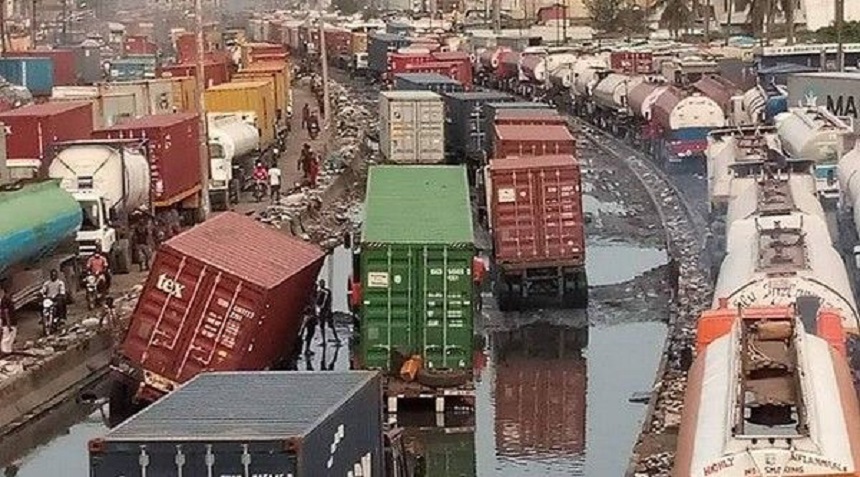 The House of Representative has lamented the huge revenue Nigeria is losing because of the poor state of roads in the Apapa area of Lagos State.

The lower chamber of the National Assembly during plenary on Wednesday said the gridlock caused by the poor road network is now making investors stay away from the area, which houses the nation’s busiest port.

In order to address these issues, the parliament wants the federal government to declare a state of emergency on the access roads to Apapa, Kirikiri and the environs.

Yesterday, a lawmaker from Kogi State, Mr Leke Abejide, moved a motion on the matter on the floor, which was seconded by Mr Taiwo Oluga.

In his argument, Mr Abejide stressed that the nation was recording a sharp decline in revenue because the roads leading to the Tin Can Island Port in Lagos were not in good shape.

He informed his colleagues that the House Committee on Customs and Excise went on an oversight visit to the area and discovered many infrastructural challenges which urgently need the attention of the government to fix.

“The traffic to the Apapa port was horrendous due to the cluster of heavyweight vehicles,” Mr Abejide stated, noting that this has brought untold hardship to commuters within the region.

According to him, the challenges have caused the country to lose huge revenue as investors are wary of the hardships faced by users of the port.

However, he appealed to the management of the Apapa and Tincan Island ports to quickly switch from analogue to digital means of operations to save investors’ time and increase efficiency in service delivery.

The lawmaker also urged the federal government to declare a state of emergency on the repair of the access roads so as to enhance the ease of doing business.

Business Post reports that several efforts in the past to fix the Apapa gridlock have failed.

In May 2019, worried by the billions of Naira lost to the lingering traffic issue, the presidency directed concerned agencies to restore law and order to the vicinity within two weeks.

This directive followed an emergency meeting convened by President Muhammadu Buhari and chaired by Vice President Yemi Osinbajo aimed at finding lasting solutions to the gridlock around the Lagos Ports.

According to the Organised Private Sector (OPS), has said the perennial gridlock in the Apapa area of Lagos State was making the federal government lose not less than N6 trillion annually across all sectors of the economy.

Even the richest man in Africa, Mr Aliko Dangote, once said in 2017 that not less than N20 billion was being lost daily to the deplorable state of the Apapa-Wharf road in Lagos.

But the Presidential Task Team (PTT) on the Restoration of Law and Order in Apapa set up by the presidency to address the issue said in August 2020 claimed that some saboteurs were responsible for the gridlock.

The Vice-Chairman of PTT, Mr Kayode Opeifa, had declared that his team has no control over the delay in transit ranging from three to six weeks for trucks to reach the ports from Mile-2, a distance of about 10 kilometres.