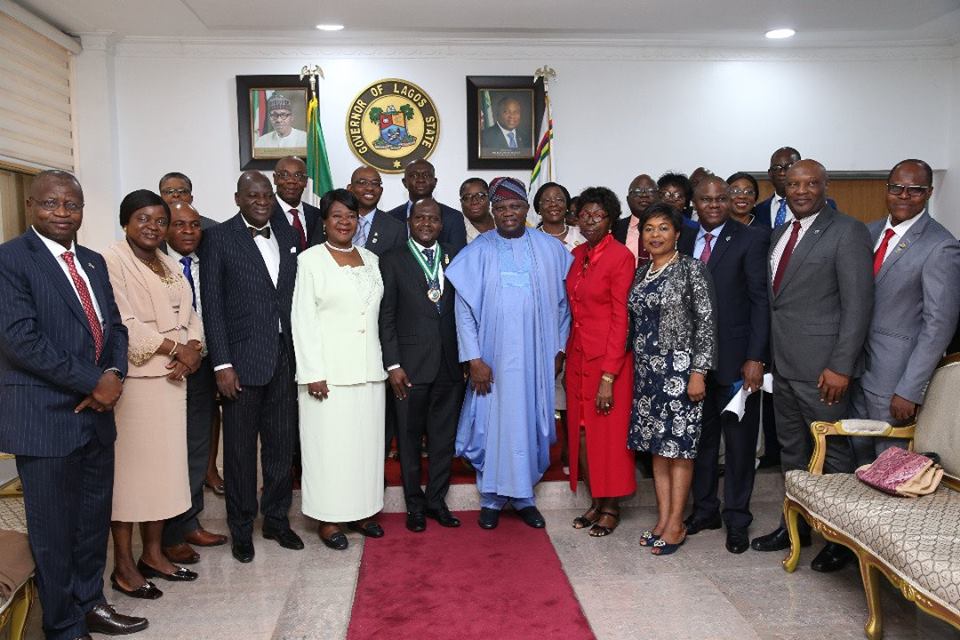 Lagos State Governor, Mr Akinwunmi Ambode, has promised to work in collaboration with the Institute of Chartered Accountants of Nigeria (ICAN) in order to boost the informal sector of the state’s economy.

Mr Ambode made this disclosure on Tuesday when the group, led by its President, Mr Ismaila Zakari, paid a courtesy visit to him at the Lagos House in Alausa, Ikeja.

Governor Ambode thanked the institute for the skill sets inculcated in him 30 years ago when he became a professional accountant, saying that those skills were very relevant and still useful in administering the State.

“Yes, there are leaders that come and go at different times, but the wish of God that an ICAN member should be at the helm of affairs of Lagos State at a time when it is so problematic, at a time when revenue is going down and at a time we want to protect our people from unimaginable taxation, but again the skill sets to be able to put all these resources together for the benefit of humanity is encouraging.

“I just want to encourage ICAN that whatever are the ideals and principles of the body are not in vain.

“The products are here for people to see and this is what we want to commend to other people and other professionals that ICAN has come a long way and ICAN has proven also that the leadership of this country is actually in the hands of those who have the public finance expertise to lead this country ahead which we have proven by what we have done in the last two and half years.

“There is no miracle in what we are doing, the fact is that it is about our skills and the knowledge that the Institute has impacted in all of us for which we are proud of,” Mr Ambode said.

Besides, the Governor acknowledged that though his administration was implementing the N25billion ETF, he would nonetheless collaborate with ICAN to boost the informal sector especially in areas of entrepreneurship skills and capital.

He also pledged to uphold and scale up the partnership that had always existed between the State Government and ICAN.

On his part, President of ICAN, Mr Ismaila Zakari, lauded the various initiatives and programmes of Mr Ambode, saying it confirms that chartered accountants can add value to governance in Nigeria, describing the Governor as a worthy ambassador of the Institute.

MR Zakari said the remarkable achievements of the Governor in office so far were worthy of emulation by other leaders.

He recalled that despite the economic challenges in the country in 2016, Lagos State, under Governor Ambode, raked in N287 billion as internally generated revenue, a figure ranked among the best the State ever generated, while the Governor also fulfilled his major electioneering campaign by implementing the N25 billion Employment Trust Fund (ETF), which he said had immensely scaled up entrepreneurship and reduced unemployment.

While noting the reconstruction of 114 inner roads across the 57 Local Government Councils in the State, Mr Zakari also commended the Light Up Lagos project and the Agric initiative aimed at encouraging local production of rice, saying that the remarkable initiative had greatly reduced rice importation and enhanced foreign exchange of the country.

The ICAN President said, “These momentous achievements are testimonies not only to Governor Ambode’s enviable track record of service to the good people of Lagos State, but they are also indelible evidence of the value that chartered accountants can add to governance.

“We are truly proud of your achievements in office and therefore warmly commend and hold you out as a worthy ambassador of the accounting profession from whom others in governance should take a cue.”

While seeking the incorporation of accountants under the ICAN technician scheme into the N25 billion ETF, Mr Zakari also invited Governor Ambode to deliver a lead paper on the theme: ‘Young Professionals: Emerging Leaders of Change and Nation Building,’ at the 47th edition of the annual Accountant Conference.