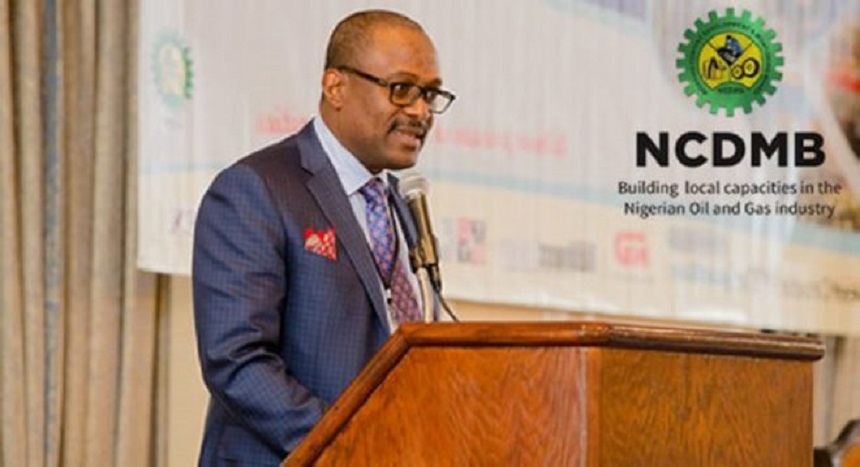 The Nigerian Content Development and Monitoring Board (NCDMB) has defended its Executive Secretary, Mr Simbi Wabote, saying that the $5 million bribery allegation against him is false.

A few days ago, one Mr Jackson Ude had accused Mr Wabote of receiving $5 million bribe from a German company to violate Nigeria’s local content laws on the Bonny Train 7 contract.

The journalist has said, “Simbi Wabote, the Executive Secretary of the Nigeria Content Development and Monitoring Board, a lackey of Timipre Sylva, actually collected $5 million bribe from Kelvion, German company to violate Nigeria’s local content laws on the Bonny Train 7 contract. Details plenty!”

But responding in a statement signed by General Manager of Corporate Communication/Zonal Coordination, NCDMB, Dr Ginah Ginah, the organisation described this allegation as baseless.

“Our attention has been drawn to a spurious and libellous online publication in Pointblank News of 10th February 2021, in which one Jackson Ude, purported that the Executive Secretary of the NCDMB, Engr. Simbi Wabote, and the Minister of State for Petroleum, Chief Timipre Sylva received bribes to undermine the Nigerian content policy in the award of  Train 7 EPC contract.

“The report epitomizes a futile attempt to soil the image of public officials who have worked hard to develop local content in the Nigerian oil and gas industry.

“It is apparent that the writer does not even understand the role of NCDMB as enshrined in the Nigerian Oil and Gas Industry Content Development (NOGICD) Act 2010.

“It could have been proper to ignore the fabricated news report, but we have a duty to provide the facts so that unsuspecting members of the public are not misled by blatant disinformation.

“For the avoidance of doubt, the NCDMB is a regulator and does not award contracts in the Nigerian oil and gas industry,” NCDMB explained in the statement.

Explaining further, it stated, “Our involvement in the award process is limited to evaluation of local content requirements in tenders, upon which NCDMB communicates to operators and/or project promoters the outcome of bidders’ compliance or otherwise with the provisions of the NOGICD Act.

“Due consideration and the decision to award a contract to any of the compliant bidders rest with the operator and their partners/ project promoters.

“The process of scaling through local content requirements in a project development is based on the provisions of the Nigerian Content Act and not on a subjective checklist that can be changed at the whims of any individual.”

It revealed that, “Circumventing the rules/requirements attracts stiff sanctions. Therefore, it would have been impossible for the Executive Secretary and the Minister or any other official for that matter to be induced to contravene the provisions of the law they are meant to enforce.

“It would have also been impossible for any official to dictate to the operators or project promoters on their choice of contractors without due regard for the commercial aspects and project economics.

“This fake news by Jackson Ude is a disingenuous attempt to diminish the hard work that engendered the Final Investment Decision (FID) for NLNG Train 7 project even at the peak of the COVID-19 pandemic last year.

“The allegations are not only reckless but also calls to question the motive of Mr. Ude and his cohorts as the country strives to attract investors and create job opportunities for Nigerians.

“Just to call a spade a spade: the report by Jackson Ude is completely FALSE and makes no sense; it is mere FAKE news that satisfies only the author’s mischief and the selfish interests of his sponsors.

“It is on record that the outcome of the Train-7 Project tenders provided very significant financial savings for the NLNG and the country at large.

“We will therefore not succumb to any mudslinging or blackmail from Jackson Ude or his cohorts, including those business promoters who did not win the NLNG Train-7 contracts but have decided to vent their spleen through channels of disinformation such as the online Pointblank News

“Since creation in 2010, the NCDMB has worked to achieve quantum growth in the Nigerian oil and gas industry from less than 5% to over 35%.

“The in-country capacities and capabilities developed over the years are evident and we will not be distracted from our focus and plan to increase this to 70 percent by 2027 in line with our extant 10-year Strategic Roadmap.”