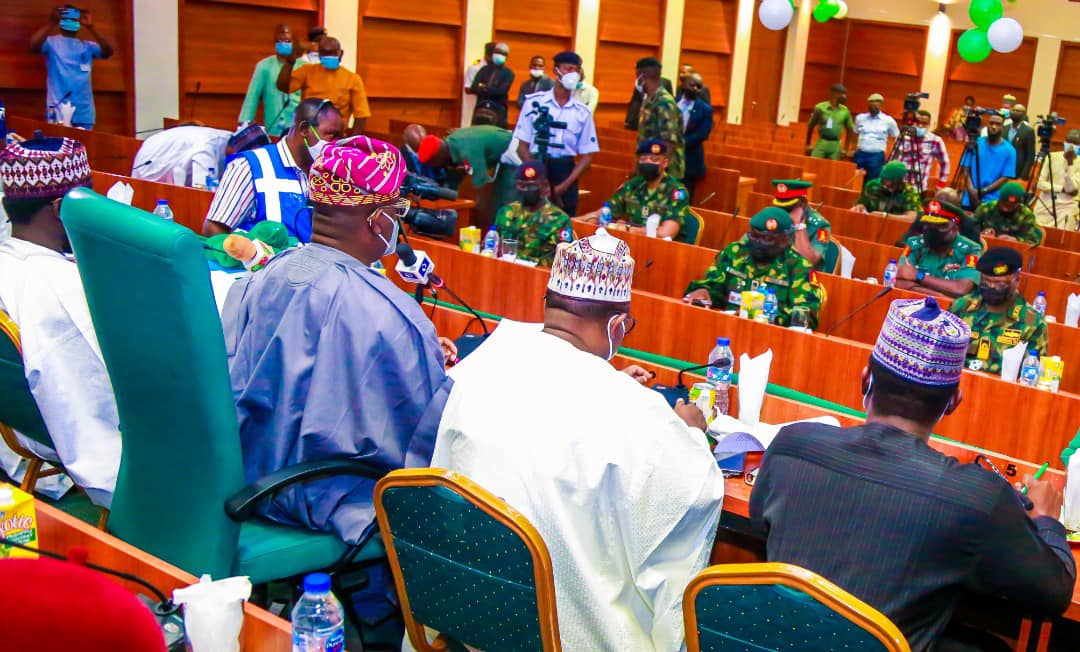 The service chiefs-designates nominated by President Muhammadu Buhari were on Wednesday subjected to a thorough screening by the House of Representatives.

Last Wednesday, the Speaker of House of Representatives, Mr Femi Gbajabiamila, after reading the letter of nomination from Mr Buhari, constituted a Special Committee to grill the military officers.

Today, the panel headed by the Chairman of the House Committee on Defence, Mr Babajimi Benson, with chairmen of the committees on Army, Mr Abdulrazak Namdas; Navy, Mr Yusuf Adamu Gagdi, and Air Force, Mr Shehu Koko, questioned the nominees on ways they intend to address the rising insecurity in the country.

Speaking at the opening of the hearing, Mr Benson said, “I can assure you that the nominees will be grilled on questions covering a wide range of subjects.

“Areas in which they will be questioned include professional skill and experience, Nigeria’s war on terror and insurgency and insecurity in general, funding of the military and strategic security knowledge and vision of the nominees as well as welfare of military personnel.”

He said Nigeria is blessed with brave and gallant soldiers, many of whom have paid the ultimate price in service to the country, noting that, “It is to their memories that we must get it right with our National Security and help secure the peace for which they gave their lives.”

He said from the inception of this 9th House, national security has been discussed more than 200 times at plenary, but that the nation is still grappling with diverse and increasing security challenges, despite some successes recorded by the gallant men and women of the Armed Forces.

“While I appreciate there is no single magic solution, I believe the kind of leadership provided to our Armed Forces is part of the solution mix,” he said, pointing out that because of the sensitivity of security issues, the proper screening session would be held behind closed door to help protect national security and “give the nominees the freedom to respond more adequately, comprehensively and expansively without any fear of an unwitting exposure of sensitive information.”

While commending the President for appointing the CDS and the service chiefs at this time, Mr Benson said, “Over the next days, we will compile our notes, deliberate fully and extensively as a committee and submit our report and recommendations to plenary next week.”

In a remark, the Minister of Defence, Mr Bashir Magashi, thanked the lawmakers for their prompt action to screen the service chiefs.

He said the Armed Forces of Nigeria are fully aware and alert to their constitutional role, noting that “I have no doubt that those nominated by Mr President will make this country proud.”

Giving his vision, the nominee for CDS, Mr Irabor, said he intended to have a leadership focus and philosophy to ensure professional armed forces that meet Nigeria’s security needs.

On his part, the nominee for COAS, Mr Attahiru, said his focus would be to reposition the Nigerian Army to meet its mandate, ensure continuous leadership development among officers and men as well as innovation to meet the demands of the 21st century.

Similarly, the nominee for CAS, Mr Amao, who is a fighter and instructor pilot, said his focus would be to ensure the integrity of the Air Force and to enhance and sustain airmen capabilities, with focus on purposeful training and human capacity development, innovative efforts, a disciplined workforce and boost morale to improve personnel welfare.