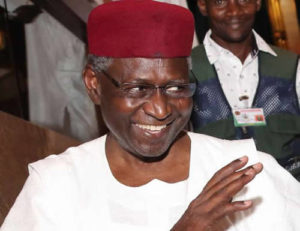 The Presidency has described as a totally incorrect, misleading and a fabrication a report published by an online news medium that the Chief of Staff to the President, Mr Abba Kyari, used funds of the Nigeria High Commission in London to pay for his medical bills recently.

It would be recalled that on December 1, 2016, Mr Kyari was rushed out of Nigeria for an emergency medical treatment in London.

Few days ago, an online news medium, Sahara Reporters, claimed the Nigeria High Commission in London paid for the treatment after writing a letter of guarantee to the Wellington Hospital for treatment to commence.

Though the Presidency, in a statement issued on Monday by Senior Special Assistant to the President on Media and Publicity, Mr Garba Shehu, admitted that the High Commission wrote the said letter to the hospital, but denied settling the bills for Mr Kyari.

“The Nigeria High Commission in London did not at any time ever settle the medical bills or any other bills for that matter as Abba Kyari personally took responsibility for paying his own bills.

“This is by the Chief of Staff’s choice. He pays for his medicals, his taxi and accommodation in the UK in spite of the high office he occupies, even when there is no rule that says he cannot be catered for by government,” Mr Shehu said in the statement.

The Presidency explained that the Commission had to write a letter of guarantee to Wellington Hospital to meet the routine requirements of the hospital “since the patient in question (Mr Kyari) didn’t possess the UK National Health Insurance.”

It said “apart from senior government officials, other reputable Nigerians are issued with such guarantee letters to hospitals,” explaining that “a guarantor is not liable unless there is a default, but this wasn’t the case with Abba Kyari who paid all his medical bills by himself as he had done on previous occasions.”

“Hospital records are available for verification to show that the Nigeria High Commission in London didn’t spend a penny on Kyari, as its involvement didn’t go beyond the issuance of the letter of guarantee to the Wellington Hospital,” the statement concluded.