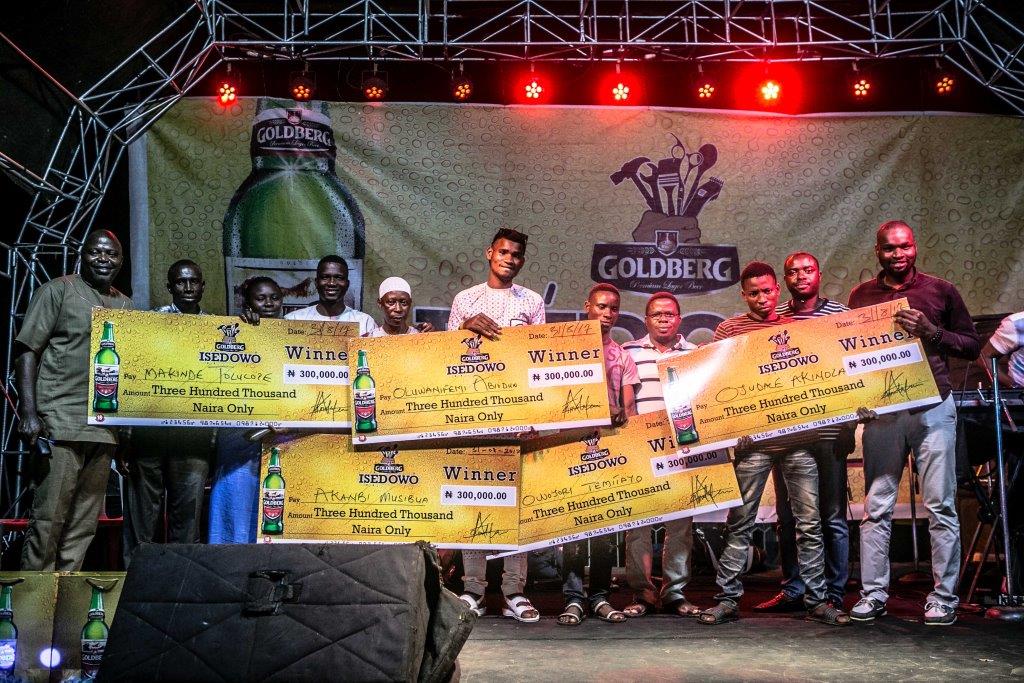 No fewer than 10 artisans in Osun State have been rewarded with N3 million grant to boost their businesses.

The funding package was given to the entrepreneurs by Goldberg lager beer, Nigeria’s leading culture-centric beer brand, through its Isedowo youth empowerment initiative in the Southwest region of Nigeria.

The initiative, which is aimed at supporting young Yoruba men and women to grow their businesses, was launched at the palace of the revered monarch, the Ooni of Ife, Oba Adeyeye Enitan Ogunwusi Ojaja II last week Thursday in Ile-Ife, Osun State.

The 10 artisans from different skilled crafts were empowered with N300,000 each to support their businesses.

An elated Olufemi, who specialises in clutch and brake reconditioning in all types of motor vehicles, expressed joy at the occasion and commended the brand for having the plight of Yoruba youth in its agenda.

“It is a day of joy for me and I am grateful to Goldberg for deeming it fit to uplift Yoruba youth with Isedowo,” he said.

He noted that his grant will be channelled into his business to boost efficiency.

Agbeniyi, a cobbler from Ilesa, Osun State, who resides and works in Ile-Ife, said that Isedowo had empowered her with the resources to expand her business from a production angle.

“With my ₦300,000 business grant, I intend to buy more materials to increase my output. Before now, I have been producing smaller quantities of shoes which do not meet the demands of my clients. But with this grant, I will be able to acquire more materials to boost my output and ensure that supply meets demand,” she said.

She commended Nigerian Breweries for the partnership with artisans through Isedowo and promised to utilise her grant judiciously.

Other beneficiaries included artisans who are skilled in panel beating, fashion designing, catering, decorating and repairing of mobile phones. They expressed their excitement and commended Goldberg for the initiative which they said would put a smile in the faces of young Yoruba business men and women in the Southwest region.

Emmanuel Agu, Portfolio Manager, Mainstream Lager and Stout brands, Nigerian Breweries Plc, said that, in addition to Goldberg’s commitment to culture and tradition of the Yoruba people, it would use Isedowo to inspire entrepreneurship in the region thus impacting on employment and income generation.

“Through Isedowo, Goldberg will extend its links with the Southwest beyond culture and tradition to the entrepreneurial passion of the people,” he said.

Commenting on the modalities of the scheme, Agu said: “Interested participants who wish to benefit from the initiative are required to showcase their business ideas and how they impact the society at any of the Isedowo centres across the Southwest region.

“There will be screening of these participants and their business ideas after which the top 100 participants will be rewarded with a grant of N300,000 each to the tune of N30 million for all successful artisans in the region.”

The first five artisans were rewarded at the unveiling of the campaign at the Ooni’s palace, while the last five were rewarded during the concert in the evening where artistes like Taiye Currency and Leye Williams entertained the crowd.

The train moves to Ekiti State on September 13 to begin registration and collation of business proposals submitted by interested artisans in the state. Then there will be screening and selection of artisans who will undergo a live audition and reward on September 22 in Ado-Ekiti.

Goldberg is known across the Southwest region as a leading supporter of culture and tradition and through Isedowo, it has deepened its connections with the people by supporting their economic aspirations.

TerraPay Gets Approval for Cross-Border Money Transfers in South Africa