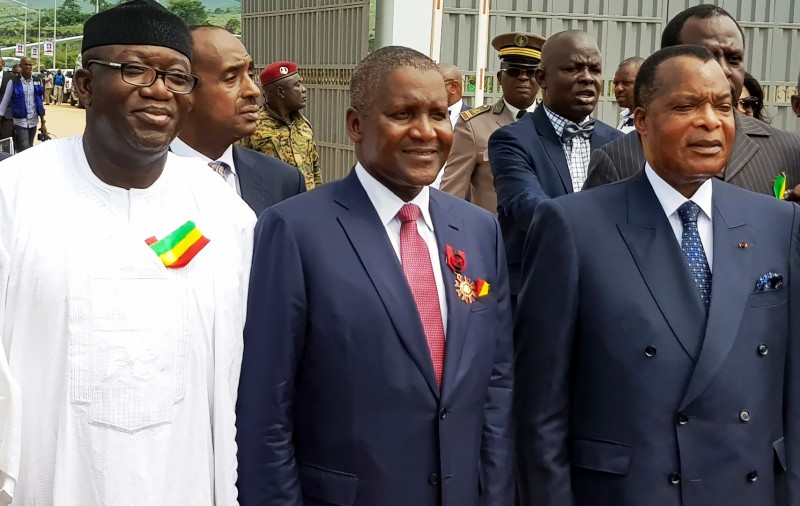 Africa’s richest man, Mr Aliko Dangote, has disclosed that one of his companies, Dangote Cement Plc, has grown its total production capacity across Africa to 45.8 million metric tonnes per annum.

The Nigerian businessman said this figure was correct as at the end of May 2017, making the firm one of the biggest cement producers on the continent.

Speaking on Thursday at the launch of his 1.5mtpa capacity cement plant in Mfila, Congo Brazzaville,

Mr Dangote noted that his aspiration is to rank among the top 10 cement producers in the world by 2020.

The new plant estimated at $300 million has potentials for about 1000 direct employment and thousands of several other indirect jobs.

Mr Dangote, who is the Chairman of Dangote Cement Plc, in his address, said his company was delighted to have completed the plant on schedule, saying the addition of Dangote Cement’s 1.5 million metric tonnes per annum plant has more than doubled the total cement production capacity of Congo-Brazzaville, which now stands at 2.550 million metric tonnes per annum, far in excess of national demand.

“It is envisaged that this will contribute substantially to the availability and affordability of cement in the country and the Republic of the Congo will no longer need to depend on imports to bridge the gap between demand and supply.

“It is our hope that the inauguration of the plant will boost Congo’s economy, conserve foreign exchange that would otherwise have been spent on imports for the country, and create employment opportunities down the value chain,” he stated.

Mr Dangote commended the Congolese government noting that the bold economic reform measures put in place by President Denis Sassou Nguesso administration have been quite salutary. “The construction industry, which is a major sector of the economy, is a beneficiary of his policies, and has been receiving the attention of investors. We believe that our investment will contribute to Congo-Brazzaville’s current economic renaissance under the leadership of the President Nguesso.”

He pointed out that his organization received tremendous support and encouragement both from the government and the people of Congo-Brazzaville, right from the conceptualisation stage of our project, to its final completion, and commissioning.

In appreciation of the good gesture of the government and the people, Dangote disclosed that without waiting to stabilise production, the Cement company had already commenced CSR projects with the construction of a road with a length of 30km around Yamba, which would have cost the local government approximately 240 million CFA to execute.

He stated further “we have also disbursed scholarships for students and we are also building a school and renovating a hospital within our host communities. Apart from these, we have repaired a dilapidated bridge on a major highway at a cost of $300,000, to enable heavy duty vehicles to cross the bridge. As a policy, we also ensure that we give priority to qualified indigenes from our local host communities in our recruitment drive.”

Also speaking at the commissioning, President of Congo, Mr Denis Sassou Nguesso, described the investment as an industrial revolution, sort of, within the Economic Community of the Central African States (CEMAC), saying his country was happy to host the investment.

According to him, his government has observed the operations of Dangote Cement in other African countries and it has helped buoy their economies by sparking off other allied industries expressing the hope that Congo situation would not be an exception.

The Congolese President described the coming on stream of the Dangote cement as timely and encouraging because it is starting operations at a time the total government revenues have plummeted by 31.3 percent and revenues from the oil sector have fallen 65.1 percent since 2015 due to a slide in global crude prices.

On his part, President Muhammadu Buhari, who was represented at the event by the Minister of Mines and Steel Development, Mr Kayode Fayemi, commended Mr Dangote and his cement company for championing economic renaissance of Africa with the construction of cement plants across several African countries saying the sterling accomplishment makes the Dangote Cement brand, and indeed Mr Dangote himself, worthy ambassadors of Nigeria.

President Buhari said his government has consistently supported and encouraged the Dangote Group in its quest to contribute its quota to the economic emancipation of the African continent, which is blessed with a plethora of natural resources.

“I believe that it is only home-grown practical solutions that can address the myriad issues plaguing Africa today and one of such challenges that Africa has been grappling with for decades is the infrastructure deficit.

“I am confident that massive investments in cement production, which is a key driver of infrastructural development, will contribute in no small measure, to addressing this perennial problem,” he said.

President Buhari recalled with satisfaction that local cement manufacturers such as Dangote Cement, Lafarge and BUA, have exploited one of the solid minerals, limestone which is a basic input for cement production and which Nigeria has in abundance, in different parts of the country to achieve self-sufficiency in local cement production in 2015, and is now a net exporter of the product.

“The backward integration policy of the Federal Government in the cement sector, which was launched in 2002, has contributed to this success story by successfully substituting imports with local production, we have saved over $2billion spent on cement importation into Nigeria, annually.

“We have also started using cement for road construction in the country due to its numerous advantages over the more common bituminous road. Again, in this area, Dangote Cement is leading the charge, through AG-Dangote, its joint venture with Andrade-Gutierrez, a construction giant in Brazil,” Nigeria’s President stated.

The Congo-Brazzaville plant, which began operations in the third quarter of 2017, will be the fifth cement plant that would be inaugurated in the last two years.