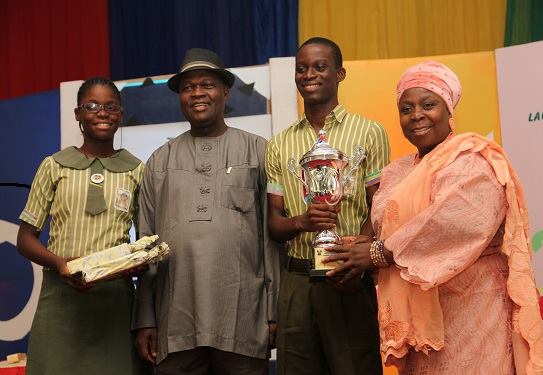 A winner has emerged in the season VIII of the Lagos State Schools Governor’s Quiz competition held at the Adeyemi Bero Auditorium in Alausa, Ikeja.

Speaking at the occasion, the Governor of Lagos State, Mr Akinwunmi Ambode, who was represented by the Permanent Secretary, Ministry of Education, Mr Adesina Odeyemi, stated that the education sector of the state got a total of over N205.8 billion in 2016 and 2017 budget in spite of the stiff competition for resource allocation.

This, he revealed was because of the need assessment, priority and the commitment of the government to the upbringing and wellbeing of the children of Lagos State.

Mr Ambode explained that the highly competitive quiz competition was designed to develop the mind of the pupils by creating healthy rivalry among school children in public and private primary, junior and senior secondary schools across the state, adding that it has over the years produced many very brilliant students who have secured admissions into various higher institutions.

He noted that “the government was happy with the overt display of knowledge by our amiable children in all facets of life, science & technology, art & craft etc. The improvement recorded in the 2016 WASSCE result and your achievements in many competitions both at home and abroad are encouraging”.

Mr Ambode said that, in order to encourage the students to break new grounds and soar higher, the government unveiled the State Digital Library to underscore her commitment to providing access to education for all and the continued development of the children of Lagos State.

The Governor used the occasion to explain that the government was working round the clock to ensure the release of the abducted students of the Model College, Igbonla.

“We empathise with the students and parents and we will not relent on our efforts until the students come back unhurt to continue their education. We will not allow any group of people to distract us from our goal of educating all Lagos children and equip them for the future,” he said.

He advised the students to devote more time to their academic pursuit to excel and be reliable keepers of tomorrow as the theme of this year’s Children’s Day suggests, urging them to shun all vices such as hooliganism, rape, examination malpractices, and late arrival to school, alcoholism, and drug abuse.

Speaking earlier, the Deputy Governor, Dr Idiat Oluranti Adebule, who was represented by the Director, Co-curricular, Mrs Babs Akinyeye, acknowledged the progress made in the education sector through the quiz competition.

According to her, “the standard of questions that are posted to the pupils/students and the ease with which they answer them is a testimony to the quality of education that we provide in the state”.

Mrs Adebule opined that the brilliance exhibited by the participants from the preliminaries to the final shows that the students have been properly groomed for the competition.