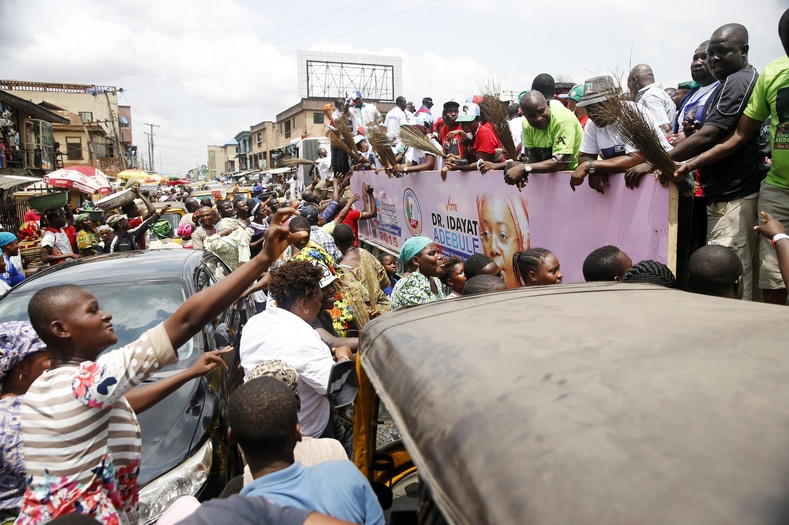 2019: The Need To Try Something Different

With the recent developments in our polity, it is has become very glaring that the major political parties in Nigeria have run their full cycle.

There is no sign of reinvention or rejuvenation. It’s the good old “maintenance of status quo” syndrome.

Our parties have become ventures that thrive primarily for the well-being of ‘cabals’ and ‘king makers’.

This is a situation that has relegated the ordinary citizens who have little or no stake to the background after the usual offering monies, beer and stomach infrastructure in the words of Ayodele Fayose that are offered during elections. Indeed, we’ve got our party politics wrong as people!

We’ve made it hard for our President to deliver and for a broad, inclusive progress to occur. It is either the boko haram insurgents, herdsmen, militants or separatists are promoting trivialities and divisive tendencies as against our collective aspiration, or a section that believe they are the ones “born to rule” without recourse to other tribes or region.

I daresay much of our dysfunction emanates from our 1999 constitution which we all agree requires changes here and there. Indeed, the recent move by the National Assembly to review the constitution is laudable.

In my humble opinion, I have come to the conclusion that a generational change in leadership and the emergence of credible independent candidates is required to make a real difference and force the political parties to reform. In nearby Central African Republic, over ten candidates stood for their last presidential elections. In the recently concluded Kenya general elections, the inspiring stories of twenty-four year old Simon Muturi, who campaigned on bicycle, twenty-three year old John Paul Mwirigi, who campaigned on foot and thirty-four year old Stephen Kipyego Sand who made history by winning the gubernatorial elections in Nandi county are still fresh in the minds of Africans and political observers across the globe. This is indeed, a clear indication that the times are changing and Nigeria cannot afford to remain in the abyss.

Consultations and campaigns for the 2019 general elections have commenced in earnest and as usual, Nigerians are still waiting to take turns at the two main political parties whether they deliver or not.

The political parties have become the machinery through which the common wealth of the people is dispensed. Membership in a ruling party brings immunity from prosecutions, job opportunities and power often to be abused. Ethnicity, religion and political party affiliation is placed above competency and so mediocrity and poor leadership is what Nigerians get at the end.

The ruling party has become so powerful in the hands of a few individuals while other parties in the opposition have become irrelevant. Try as they may, the system is stacked against them. If Nigeria wants to lead the way again as a real democracy, the 2019 general elections is time to try something different.

There is no real separation of powers in Nigeria’s political arrangements, because we don’t operate on the principles of checks and balances; where the various arms of government, the executive, the legislature and the judiciary serve as a buffer against the possible excesses of each other.

In Nigeria, what we have is a “supreme executive” that lords over other arms of the government. In fact many parliamentarians aspire to be members of the Executive which basically does as it pleases. That is why someone who had served for twelve years as a senator would still want to be governor or minister.

In Nigeria, we believe that the governing party must also have the majority in the parliament as this will make governance effective and once the table doesn’t turn in this direction, the elephants continue to fight at the expense of the poor masses.

The President, governors and their teams believe they are more powerful than the representatives of the people and it is not to be so.

This winner takes it all mentality often synopsize the power play dynamics in our polity and this has tiptoed our achievements as a nation. There are very credible leaders scattered everywhere in Nigeria and some of these people don’t belong to any party. Those that even belong are hardly given the opportunity to lead.

We are enmeshed in a complacent pool where election winners hardly build bridges. Instead, for daring to contest at the first instance, the anti-corruption crusaders who many perceive to be selective in their fight and often acting at the whims and caprices of the ruling party will come after you like vultures preying a dead lion.

Appointments are guided primarily by party affiliation rather than merit thus, making the wheels of development to grinds slowly.

Some schools of thought are of the opinion that Nigeria is immature for democracy. They say the two major political parties are the problem. They equate democracy with the two political parties. I disagree with this view. We can have independent candidates at all levels and still have a democracy. I’ve gotten used to people pouring scorn on the idea of an office holder who belongs to no party. This is what the defenders of the status quo do. They make sure to remind the gullible electorate that, that’s an impossible scenario; that to hold an office you have to be part of a party; so that your policies can go through, so you can have people who will work for you. Being in opposition is the most dreaded prospect for party operatives. So they will do whatever it takes to attain power; and do whatever they can to frustrate the governing party when in opposition.

Real power resides with the people whom the legislature represents. It is quite unfortunate that Nigerians have not fully realized these potentials. If they do, the forthcoming general elections will say it all. Democracies are advancing everywhere in the world and we cannot continue to practice political recycling instead of political rejuvenation.

In all ramifications, I think selecting leaders at the various levels of parliament from the same party as the President, governors and Local Council Chairmen only serves to deepen the practice of power rarity that plague our politics today.

The 2019 general elections will provide another ample opportunity if Nigerians are inclined to try something different. I don’t mean a different party but a different concept such as an ‘’Independent candidate’’ and support for a generational change in leadership. If we are able to achieve this, it will send a strong signal to our contemporaries that our democracy is attaining maturity.

We need leaders who are not obligated to any one group but to the people. It is high time Nigerians got tired of politics as usual. We are in dire need of a meritocracy but that will only remain a figment of our own imagination with our current political impasse. There is a “wind of generational change in leadership” blowing across the world today. People are tired of politics as usual. They are tired of the shenanigans of the political establishment. They want something different. Not a new version of what exists but something entirely different.

History has it of societies that made quantum leaps once they broke away from the established arrangements. With the retinue of political leaders in France, the electorate still settled for thirty-nine year old Emmanuel Macron as their president. We must dare to try out new things! Change is a continuous process that doesn’t come easy because of the unknown. We haven’t failed as a nation. We now know a thousand things that won’t work, so we’re that much closer to finding what will and as such, the younger generation must take it upon themselves to deliver Nigeria from political parties in their current form.

Comrade Omaga E Daniel is the Executive Director, Beyond Boundaries Legacy Leadership Initiative (BBLLI) and can be contacted with omaga.daniel@gmail.com.

5 Solid Tips to Grow Startup to Outlive You