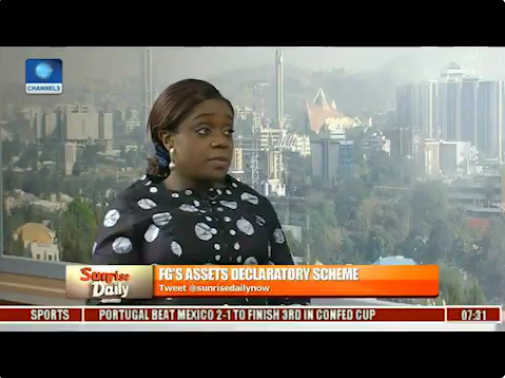 Minister of Finance, Mrs Kemi Adeosun, has disclosed that payment of tax by citizens will strengthen government’s accountability, especially at the state level.

Mrs Adeosun made this disclosure yesterday while on Channels TV to speak on the recently launched tax evasion amnesty programme of the Federal Government tagged the Voluntary Assets and Income Declaration Scheme (VAIDS), which commenced on July 1, 2017.

The Minister said it was natural for citizens to avoid paying taxes to the government, but stressed that when they eventually do, they ask questions on how their taxes are being utilised, which she said would keep the government on its toes.

She also said government usually map out punishment for tax defaulters because everywhere in the world, nobody likes to pay taxes.

“No one like paying taxes anywhere in the world, if there are no consequences for not paying taxes, people will not pay because nobody likes to,” the Minister said on Channels TV’s Sunrise Daily programme.

In the clips shared on her official Twitter page, which were viewed by Business Post, Mrs Adeosun said, “I think there is an argument that has been going on in Nigeria for many years and it is a very convenient one.

“People always ask ‘what is the government doing (with the already paid taxes) and because government is not providing (the necessary basis amenities to) me, I am not going to pay taxes’.

“Our position on this is if you look at successful nations, they have high rate of tax compliant and Nigeria intends to join that group. So, this administration is determined to change that mentality.”

“This is part of our drive to reduce our reliance on oil. Many countries don’t have natural resources, but they rely on their taxes.

“We need to rebuild and enhance our tax system and I think it would help accountability because when people start paying taxes, they will take more interest in holding government to account; getting involved in budgeting and others because their money is involved rather than money shared from Abuja,” she said.

The newly launched VAIDS is expected to capture about 4 million new taxpayers from the 36 states and the Federal Capital Territory.

The scheme is to be implemented by the Federal Government in partnership with state governments and it is expected to lapse till March 31, 2018.

Government said it is targeting about $1 billion from the scheme, which aims to give tax payers a time-limited opportunity to regularise their tax status without penalty.

“Proceeds of this scheme will not disappear. We will provide regular updates on the funds collected to date, and how those funds are being put to very transparent use,” Mrs Adeosun had assured in a statement issued by her Ministry before the programme was launched on Thursday, June 29, 2017.

NNPC Gets $2b Discount on Renegotiated Deals