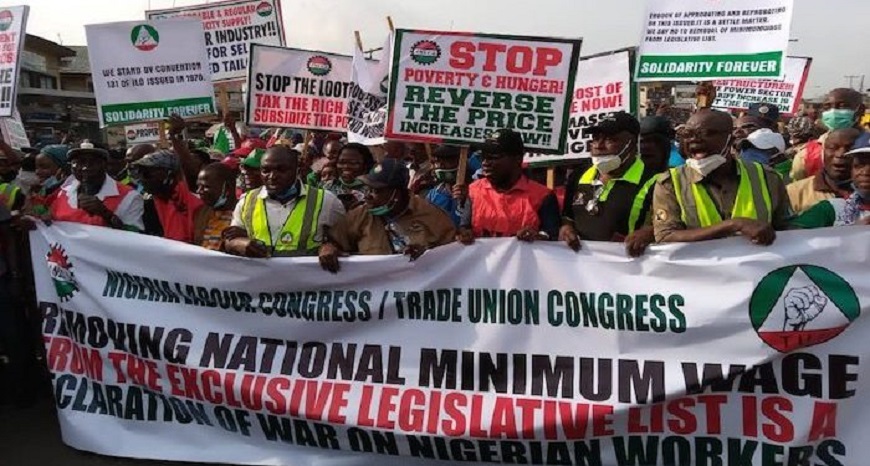 As the world marks Workers’ Day, the Nigeria Labour Congress (NLC) has threatened to embark on a mass industrial action if a proposed bill, which seeks to transfer minimum wage to the concurrent list, is passed by the National Assembly.

The President of the labour union, Mr Ayuba Wabba, disclosed this on Saturday, May 1 during an event organised to mark this year’s event in Abuja.

He also said Kaduna workers will withdraw their services for five days in protest of the sacking of workers by the Kaduna State Government, warning that if the disengaged workers are not reinstated, there will be a total shutdown.

The labour leader said it was wrong for the state government to fire the workers the way it did, emphasising that the union was ready for a showdown.

According to him, everything necessary would be done to protect the interest of every Nigerian worker, wherever they may be.

Meanwhile, the Minister of Labour, Chris Ngige, who represented President Muhammadu Buhari at the event, said the new minimum wage law applies to everyone, and state governments are bound by it, adding that he was opposed to moving the minimum wage from the exclusive legislative list to the concurrent list.

The Minister praised Nigerian workers and urged them to continue to support the government, which he said remains a good friend of labour.

He assured that the administration of President Buhari will continue to protect workers and come up with policies aimed to better their lives.

The bone of contention, the minimum wage bill, is being sponsored by Senator Garba Datti, an All Progressives Congress (APC) lawmaker from Kaduna State.

The bill passed second reading at the House of Representatives in February.

According to Mr Datti, rather than impose a central minimum wage, states should have the capacity to decide their own wages, based on their own socio-economic variables and circumstance.

However, the NLC has described the bill as “anti-worker”.

Related Topics:Minimum Wage Bill
Up Next