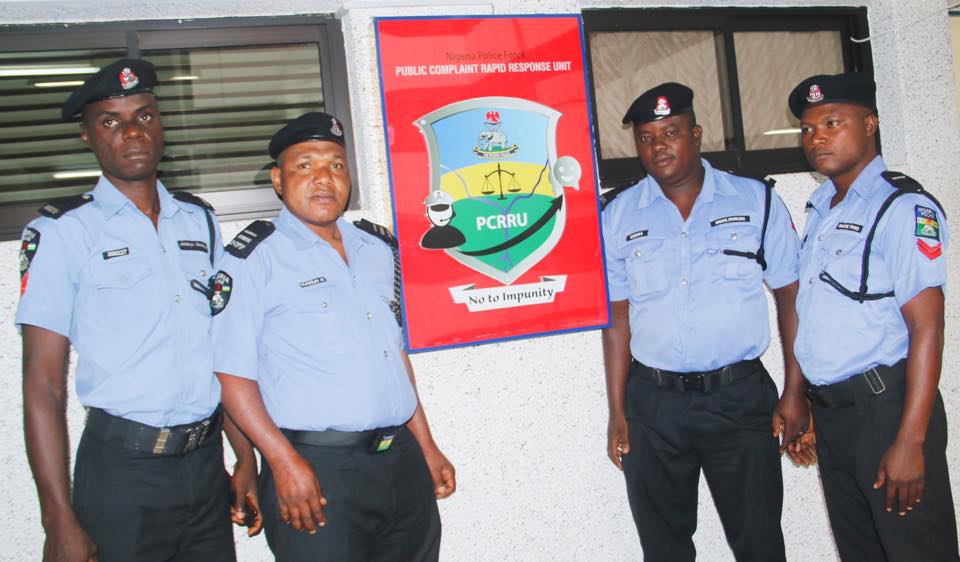 Authorities of the Nigeria Police Force have approved the dismissal from service of four police officers attached to Ijebu-Ode Area Command in Ogun State.

A statement issued by the police explained that the cops were fired in line with the fight against corruption and ensuring adherence to the ‘Change Begins With Me’ campaign of the Federal Government.

They were charged, tried and found guilty in an Orderly Room conducted at the Area Command Headquarters, Ijebu-Ode for two offences against discipline as provided for in Paragraphs E (iii) Discreditable Conduct and C (ii) Corrupt Practice under the First Schedule of Police Act and Regulations Cap. P19. Laws of the Federation of Nigeria 2004.

The released by the police said on the June 12, 2017, the Public Complaint Rapid Response Unit (PCRRU) received a complaint via WhatsApp number 08057000003 which states thus;

“Good morning sir, My name is (Withheld), living in ijebu ode, on Wednesday afternoon I went to withdraw money from the bank and am been sent by my boss when going back to the office some policeman car just double cross me and collect my phone telling I stole the phone I should follow the to the station and the took me to igbeba police station here in ijebu asked me to do frog jump from outside to a room, which I did to afford being beating. After gotten there they started calling a internet fraudster which I told them am not that am an (withheld) and they started beating slapping me and forcing me to write a statement which they are the one telling me what to write and after that they collected 50,000 from me( from my boss money which I went to withdraw before ealizing me. Sir that’s my story. All this are not good and policeman are meant to protect us but this nowadays police officer have turn this to another thing by using their power to ride civilians, maltreating and harassing civilian. The officers name who headed the squad are been called which I overhead are name: one is Omo Alaja while the second is called AY but don’t know the name of the other 2 officer. Please sir you have to stop this kind of officer because they are taking this to far”

The police noted in the statement that the complaint was immediately registered, Tracking Number PCRRU451591 issued and investigation initiated. The Divisional Police Officer (DPO) Igbeba Division, Ijebu-Ode was mandated to commence an enquiry straightaway.

The policemen were identified and it was discovered that they apprehended the complainant on 7th June, 2017 without any reasonable cause and extorted the sum of Fifty Thousand Naira (N50,000) “Bail Money” despite the #BailisFree campaign before he was eventually released same day.

The extorted N50,000 was subsequently recovered from these unethical policemen who were armed in plain clothes on the day of the incident. Their action is contrary to the directives of the Inspector-General of Police and unacceptable.

Necessary disciplinary measures were initiated against the erring policemen, they were found guilty as charged in an Orderly Room trial after the presentation of witnesses and exhibits. Punishment of dismissal from service was recommended by the Adjudicating officer and proceedings reviewed by the relevant Nigeria Police Force (NPF) authorities.

The punishment of dismissal from service has been upheld with immediate effect and all NPF uniforms and accoutrements including warrant cards (ID cards) issued to the men have been retrieved with all dismissal procedures completed.

The complainant was also handed back his N50,000 with an apology a day after he lodged the complaint. The elated man after receiving his money thanked the PCRRU, he said “Great job you people are doing right there, thank you for the prompt response”.

Furthermore, the Inspector-General of Police, Mr Ibrahim Idris, while reiterating his stand on zero tolerance for corruption vows to “flush out those tarnishing police image” from the Force. The IGP also impress it upon the PCRRU to ensure that all allegations of professional misconduct against the police are promptly investigated and officers found wanting in any proven case be made to face appropriate sanctions as stipulated by relevant laws.

Meanwhile, members of the public have been advised not to resort to self-help when faced with case of police misconduct, but are enjoined to report such to the PCRRU for resolution.

Related Topics:Police Dismiss 4 Officers
Up Next