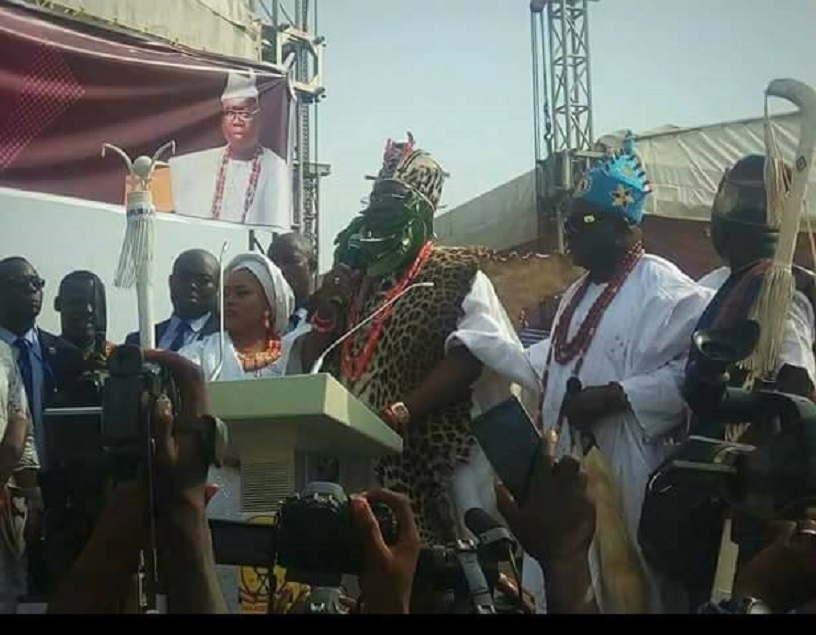 Newly installed Aare Ona Kakanfo, Mr Gani Adams, has described his new position as a huge responsible because of what is expected of him.

Speaking at his installation ceremony in Oyo town on Saturday, Mr Adams, who doubles as leader of the Oodua Peoples’ Congress (OPC), a pan-Yoruba group, emphasised that his first task would be to preserve the Yoruba culture.

While paying homage to the 14 occupants of the post before him, the new Yoruba war leader lamented that the Yoruba culture was fast losing its relevance because of civilisation.

However, he promised to look into this and make efforts to save the Yoruba race from going into total extinction.

“The import of the office still stands: protection of the interests of Yoruba race, both within the country and everywhere else people of the race exist.

“While it is estimated that there are 60 million Yoruba within Nigeria and about 200 million others scattered all over the world, as a starting point, the preservation of the culture of the race will occupy my attention.

“Pitiably, as a race, we are gradually losing our culture. In fact, from my travels around the world, it has become obvious that people of other races are taking more interest in our culture than we the owners of the culture, with Americans, Europeans and Asians now earning Degrees in the study of our culture, beliefs and what they have come to term Doctrine. We need to preserve our culture to fully realize the potential of the Yoruba.

“Though with an activist background, it is now clear that I have to do more as a bridge builder with this new responsibility,” Mr Adams said in his speech.

Speaking further, he said, “In as much as the focus of my struggle has changed over the years from the heady days of the Oodua People’s Congress (OPC) to the spread of our culture through the formation of the Oodua Progressive Union (OPU), which is now in 79 countries, the Olokun Festival Foundation, Gani Adams Foundation and many others, this new responsibility, despite my age, has unwittingly forced the stature of a statesman on me.

“I promise to live up to that calling.”

In order to succeed, Mr Adams promised to work with our traditional rulers, grassroots leaders and have good rapport with all stakeholders, no matter the differences of the past, for the unity, progress and advancement of Yorubaland and Nigeria.

He noted that, “The office of the Aare Ona Kakanfo will project the Yoruba culture and tradition by promoting and sustaining our identity globally.

“The office will equally ensure unity of all Yoruba sons and daughters all over the world.

“Also of strategic importance to me is research and documentary to sustain the ideals of our founding fathers.”

“Since we are now in the era of Information Technology, we will be unveiling historical documents obtained from the Iku Baba Yeye on the Aare Ona Kakanfo title to a website.”