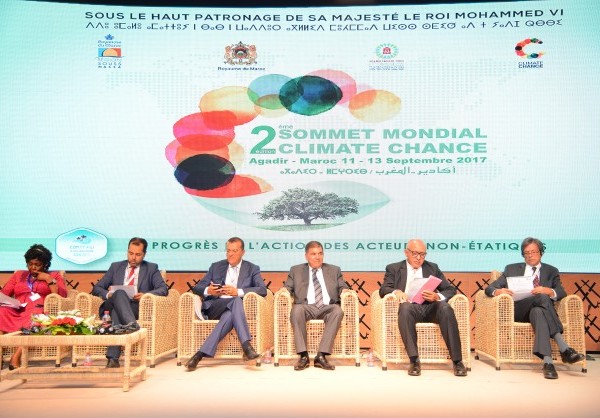 A need to come up with concrete actions on climate was emphasised at the second edition of the Climate Chance World Summit held in Agadir, Morocco.

“This edition reveals once again that international civil society continuously expect such meetings and talks, and reaffirms its determination to assert its natural role in the fight for climate,” said Ronan Dantec, President of the Climate Chance Association, at the closing of the summit.

The summit was concluded with the signature of ‘The Statement of Agadir’, supported by many Moroccan non-state actors and signed by many of the world’s major networks including CAN-International (focal point to CCNUCC, representing more than 1000 Climate and Environment NGOs); ICLEI (focal point of communities to CCNUCC), CGLU, C40; YOUNGO (the constituency of youth associations at the CCNUCC); CSI: International trade union confederation (focal point of trade union at the CCNUCC); WECF; and IPACC (Association of African Indigenous Peoples).

The event had over 5,000 participants from 80 nationalities in attendance during three days of talks and debate.

“The Agadir Statement will be brought to COP23 next November. Its adoption is a major step towards strengthening the joint work of global non-state actors. Its signature in Agadir consecrates the efforts undertaken by the Souss Massa Regional Council during the last 10 years, in order to accompany the Moroccan civil society in its fight against climate change” said Brahim Hafidi, President of the Souss Massa Regional Council, the host of the event.

Non-state actors commit through this declaration to intensify the climate action and urge the governmental parties to amplify their ambition to facilitate dialogue.

This MoU is expected to be more than intent; it is a roadmap to facilitate dialogue following the Paris Agreement, to be held in 2018.

Launch of the Climate Chance Observatory: A tool for assessing the progress of climate action by non-state actors for decision-makers.

On September 13, the Climate Chance Observatory for Climate Action of non-state actors was officially launched. This observatory should make possible the measurement of the reality of the actions undertaken by the non-state actors, their success and their challenges.

A first report will be released in autumn 2018 before the COP24 to be held in Poland.

Many personalities of the climate negotiations have made the trip to Agadir (check the list in annex), thus testifying the willingness to work with non-state actors community in the implementation of the Paris Agreement, and in achieving the objectives reaffirmed in 2015 during the COP21 and in line with the Marrakech Partnership.

“The success of this Summit is also owed to a strong African and Moroccan presence and mobilization in workshops and meetings” highlighted Ronan Dantec.

African local and regional elected representatives have launched a call for the mobilization of African civil society, of which the first step will be made at Africités 2018 in Brazzaville.

The objective is to bring a concrete answer to the initiative “we are still in” and reaffirm that specific challenges and needs in Africa can only be resolved collectively.

With over 100 side-events, the three-days Summit allowed climate actors to discuss progress together, exchange good practices on mitigation and adaptation and develop synergies and convergences on common themes: in particular access to finance, urban planning, migration flows, food security. These are the main topics on which it is urgent to act effectively and concretely between all the actors (local authorities, associations, businesses, trade unions etc.).

Brahim Hafidi paid tribute to the Moroccan civil society, strongly mobilized in favor of the climate “Raising awareness about environmental protection, training to the use of renewable and photovoltaic energy, development of the green economy, these are some high-impact actions effectively implemented by the associations we, the Souss Massa Regional Council, do support”.

The summit was also the occasion for the signature by several local authorities of their intention to subscribe to the initiative Under2 MoU.