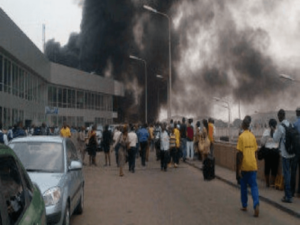 Reports reaching us indicate that the headquarters of the Federal Airport Authority of Nigeria (FAAN), Lagos has been razed down by an inferno.

According to information scooped by our reporter, the fire destroyed properties worth millions of Naira.

As at the time of filing this report on Tuesday morning, several trucks of the fire service department of the agency were spotted trying to bring the situation under control.

The cause of the inferno was not immediately known, but some members of staff of FAAN were seen running helter-skelter.

The headquarters of FAAN is tucked inside the premises of the Murtala Muhammed International Airport (MMIA) in Ikeja, Lagos.