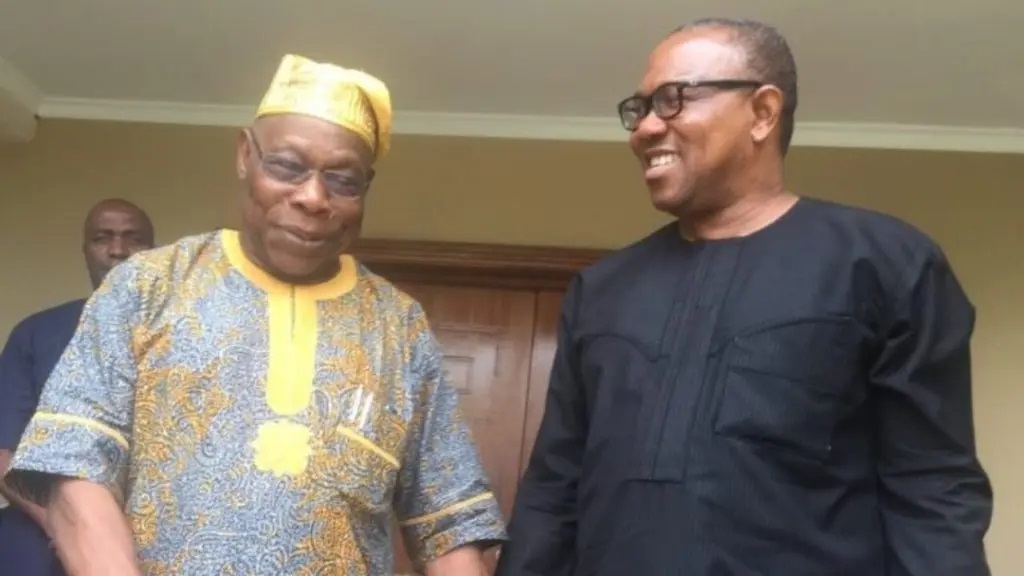 The presidential candidates of the Peoples Democratic Party (PDP), Mr Atiku Abubakar, and his counterpart in the All Progressives Congress (APC), Mr Bola Tinubu, have been urged to step down for the candidate of the Labour Party, Mr Peter Obi.

This appeal was made by a pan-Igbo socio-political pressure group, the South East Revival Group (SERG), in a statement signed by its president and national coordinator, Mr Willy Ezugwu.

This is coming a few days after former President Olusegun Obasanjo openly endorsed the former Governor of Anambra State for the race.

In a letter addressed to the youths on January 1, 2023, Mr Obasanjo said Mr Obi remains the only candidate that could rescue Nigeria from hell on earth he said the current administration of President Muhammadu Buhari had plunged the country into.

Reacting to this, SERG described Mr Obasanjo’s endorsement as “a welcome development,” saying that based on equity, fairness, and justice, it was really the turn of the South East to produce the next president of Nigeria.

“The late second republic Governor of Kaduna State, Alhaji Abulkadir Balarabe Musa, in an interview with Channels Television on September 19, 2019, unambiguously proposed that the South East region should produce the next president come 2023, arguing that zoning the next presidency to the region will not only give the Igbos a sense of belonging in Nigeria but will also promote national unity and cohesion.

“In his interview with Vanguard on July 25, 2020, the late statesman insisted that for the sake of peace, justice and national unity, the presidency should go to the South East region of the country in 2023.

“According to the former governor, since the North, South West and South-South have all had a shot at the presidency, it will be morally wrong if any of the zones contest the presidency in 2023 against the South East that has not tasted power since the return to democracy in 1999.

“On its part, the Yoruba socio-cultural organisation, Afenifere, also called for a Nigerian of South East extraction to lead the country come 2023.

“Afenifere leader and elder statesman, Pa Ayo Adebanjo, observed that based on morality, the South East region should produce the next president in the spirit of fairness and unity.

“The elder statesman also reasoned further that since his South-West region has had its turn with former President Olusegun Obasanjo and Vice President Yemi Osinbajo, the South-South with ex-President Goodluck Jonathan, political parties should not hesitate to see the South East as the next in line.

“On April 26, the Leadership newspaper reported that the Southern and Middle Belt Leaders urging all political parties to zone their presidential tickets to the South East to cement unity and fairness in the country.

“The regional leaders reiterated that most of the zones in the country have had their people occupy the presidential villa, adding that the South East has qualified candidates in all political parties that can be president in 2023.

“These Nigerian elders and statesmen, who have seen it all, cannot be wrong in their unanimous calls.

“With peace eluding the country, not just because of agitations in most parts of the country but also in view of the increasing insecurity and poverty, rotation of the Presidency remains the panacea for attaining national unity and transformational development.

“From the words of our elders, rotational Presidency is the most viable option for nation building and in the quest to evolve a country where all citizens have equal rights to positions of authority, rather than the skewed political leadership practised in the country since the post-civil war politics in Nigeria,” the group stated.

“Secondly, the South East has produced the best candidate among the contenders who is unarguably the most prepared for tackling the current security and economic challenges bedevilling Nigeria. To crown it all, Mr Peter Obi has picked one of the most qualified young men from the North, Senator Yusuf Datti Baba-Ahmed, as his running mate.

“It was surprising that in the build-up to the primary elections, the South East was tactically excluded from the race by selfish politicians in both the PDP and the APC as their presidential tickets went to the highest bidders, rather than to the most competent to lead Nigeria.

“But, by divine providence and in the wisdom of the Nigerian people, a third force was birthed, and Mr Peter Obi and Senator Yusuf Datti Baba-Ahmed became the anointed joint ticket for the task of rebuilding our country, which has been troubled by ethnicity and religion in recent times.

“It has been argued that the North East and the South East have not produced a President of Nigeria since the return to democracy in 1999, but in the interest of justice, it would be unthinkable for a northerner to take over from President Muhammadu Buhari who himself is of Northern extraction come May 29, 2023.

“Therefore, the Obi-Datti presidential ticket is an opportunity to unite Nigeria and promote justice and equity for national integration development.

“Today, we are excited that Nigerians have seen the need to give unto themselves the best and most qualified presidential and vice presidential candidates in the person of Mr Peter Gregory Obi and Senator Yusuf Datti Baba-Ahmed, who are youthful and have no baggage of corruption. Both have come to the race with a verifiable track record of performance in both the public and private sectors.

“The public endorsement of the joint ticket by former President Olusegun Obasanjo has given the country direction and hope for national recovery after years of maladministration and mismanagement of Nigeria’s natural endorsements.

“We then call on the presidential candidates of the PDP and the APC to toe the path of honour and immediately step down for Peter Obi as it is the right thing to do at this time of our national leadership deficit,” SERG added.